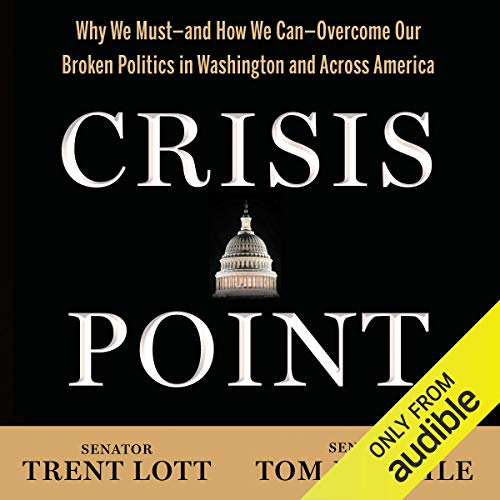 Why We Must - and How We Can - Overcome Our Broken Politics in Washington and Across America
By: Senator Tom Daschle, Senator Trent Lott, Jon Sternfeld
Narrated by: Michael Butler Murray
Length: 7 hrs and 27 mins
Categories: Nonfiction, Politics
4.5 out of 5 stars 4.4 (9 ratings)

Tom Daschle and Trent Lott are two of the most prominent senators of recent time. Both served in their respective parties' leadership positions from the 1990s into the current century, and they have almost 60 years of service between them. Their congressional tenure saw the Reagan tax cuts, a deadlocked Senate, the Clinton impeachment, 9/11, and the Iraq War.

Despite the tumultuous times, and despite their very real ideological differences, they have always maintained a positive working relationship, one almost unthinkable in today's hyperpartisan climate.

In their audiobook,Daschle and Lott come together from opposite sides of the aisle to sound an alarm on the current polarization that has made governing all but impossible; never before has the people's faith in government been so dismally low. The senators itemise damaging forces - the permanent campaign, the unprecedented money, the 24/7 news cycle - and offer practical recommendations, pointing the way forward.

Most crucially, they recall the American people, especially our leaders, to the principles enshrined in the Constitution and to the necessity of debate but also the imperative of compromise - which will take leadership, vision, and courage to bring back.

Illustrated with personal stories from their own eminent careers and events cited from deeper in American history, Crisis Point is an invaluable work that comes at a critical juncture. It is a work of conscience as well as duty, told with passion and eloquence by two men who have dedicated their lives to public service and share the conviction that all is far from lost.

"Trent Lott and Tom Daschle were remarkable Congressional leaders who revered the Constitution and got things done during difficult times. This timely book extends their public service by illustrating how political parties can achieve the greater good, how Congress can again work successfully and regain public confidence and support." (Former senator Richard Lugar)
"An important contribution to an ongoing debate." (Kirkus Reviews)

Required reading for a new administration

I pray that our incoming president listens to this audiobook or reads the print version. He deserves the benefit of the wisdom of these men who offer all of us sage guidance in how to make effective deals in our institutions of government. I hope that every engaged citizen will also read it. The lessons in how to lead in our naturally adversarial system are as important as ones on the necessity of diversity of opinions needed to really understand issues.