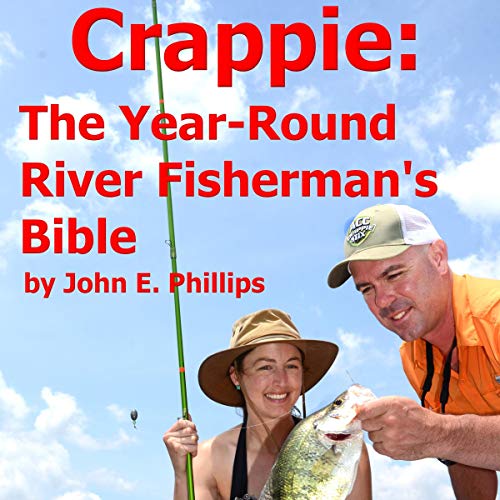 By: John E. Phillips
Narrated by: John Davenport
Try for $0.00

Fishing rivers for crappie and being able to find and catch speckled sides consistently has long been one of the mysteries in the crappie-fishing world.

“One of the reasons that river systems are so difficult to fish is because the water’s either rising or falling in them,” says Ott DeFoe, the 2019 Bassmaster Classic champion.

Rivers also are very susceptible to floods and droughts and constantly have current moving through them. Often fast current or slow current in rivers is created by rain or droughts upstream. When rivers flood, they can wash away fish habitat like logs, sunken trees, manmade brush piles and stake beds. But that’s the time when a river also creates new crappie hot spots that haven’t been available to the crappie or the fishermen before the flood.

Because river systems are so unpredictable, I’ve felt the best way to get the most useful information on how to fish rivers for crappie is to talk to numbers of anglers all over the nation to learn their best tactics.

In this book, I’ve gleaned crappie-fishing wisdom from three dozen crappie anglers and guides from a dozen states, who consistently catch crappie at all times of the year. The tournament crappie fishermen in this book fish most of the country at different times of the year on various river systems and lakes. And, these anglers use techniques you never may have considered, including:

What listeners say about Crappie