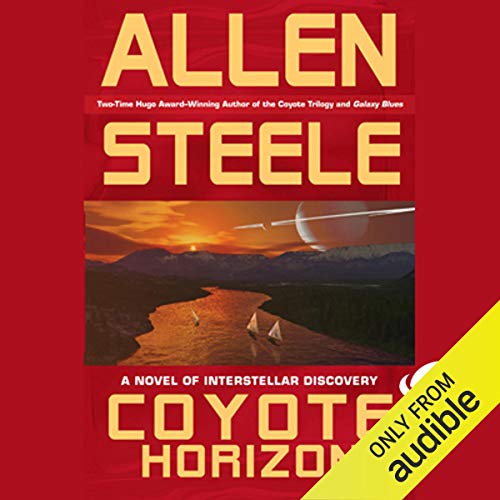 By: Allen Steele
Narrated by: Peter Ganim
Try for $0.00

The planet of Coyote has become the last, best hope of humankind, but it has also become the principal point of contact with the hjadd, the alien race encountered by a European starship many years earlier. Although the hjadd have built an embassy near the original colony, they remain a mystery.

And as the colonists make preparations to explore the rest of the new world, ex-convict Hawk Thompson discovers more about the hjadd than anyone has learned before - and his knowledge will change human history...

What listeners say about Coyote Horizon

A Disappointing Fourth in the Coyote Series

In this fourth book of the Coyote series, Coyote has become a thriving planet, made possible by the star bridge that allows other worlds to travel to it. Tourism is a big industry and imports give the planet all the products it once didn't have access to. Recurring characters have grown older, but are still present within the book and initially the reader settles in for another good read. Hawk Thompson is introduced early in the book, who is the nephew to former Coyote president Carlos. Both characters are prominent in the book. Hawk receives the gift of a book from a representative of the hjada, an alien race. The contents of the book conflict with previous portrayals of this race (in other Steele stories), but the listener can reasonably allow this. But it is the red flag that signals the book will fall apart. The story becomes an allegory, which is painfully obvious and far beneath Steele's creative writing abilities. Religious, or spiritual leaders lose their personalities in favor of standard stereotypic bland personalities and the story continues to go downhill. Action at the end is drawn out and needed better editing. It is at this point that Carlos commits a big mistake that is so out of character for him that a fan of the Coyote series will find it unbelievable. This mistake costs Coyote a great deal and sets up the ending which is the lead in to Steele's planned fifth book. The ending is a huge disappointment and almost lazy in nature and Steele continues the allegory which just makes the disappointment worse. The book may be better enjoyed if someone has not read the other three books, and it can be read by itself. But if you have read and enjoyed the other three, you will be disheartened by Steele's labors. The book had tremendous promise, but Steele doesn't deliver.

Not sure anyone would enjoy this book. In this book Steele is short on science fiction, but long on creating a new religion.

I very much enjoyed Horizon the 4th book out of 5 of the COYOTE series.
It has a very good story and great narration. It could have told more about the Aliens but that aside it was very good to listen to.

I would be too embarrassed to recommend this book to anybody, the story line and concept is totally worthless. The only reason I listened all the way through is because the book starts out with interesting characters and some great story telling, but then sub comes to the worst story line I have listened to lately - plus I paid for it.

What was most disappointing about Allen Steele’s story?

A fatal mix of environmentalism, global warming fears, immigration issues, communism is great, and anti religion is driving the story in this book. I think the only current issue missing in the story line is national healthcare - how was that missed ? This book ends up as a environmentalist - communist manifesto. But hey "tsan tau" or whatever the new region in the book is called is really NOT a religion but more a "philosophy" - as A. Steele assures the readers over and over...

I did enjoy Peter Ganim's performance it made listening easy. To bad the story really sucked - not sure how he was able to read through this - I would have looked for a different job.

Was Coyote Horizon worth the listening time?

Has a few interesting concepts, but it starts to get trite. East listen sifi story.

I loved every minute of this book! When I was done, I just had to download the second half immediately.

Where does Coyote Horizon rank among all the audiobooks you’ve listened to so far?

I enjoyed Coyote Horizon quite a bit. Although I really enjoyed the 1st series more.

Not much better than Interstellar living

how an author can go from 3 previous books of exploration, hardship and survival to this, is astounding. this book delves into mind enhancement of cultists by drug experimentation. these people then become enlightened by the aliens that there really is no god but you are god yourself. those who accept this are spiritually moved, but those who cling to their faith in god become meniacal and murderous. wow. I know this is fiction but come on. call me a crazy chistian but I'm done with this author.

Hyperspace and a Frontier World

This is the first time I have read a book from Allen Steele, and it turns out that Coyote Horizon is the 4th 'Coyote' book from the author.

While it follows on from a trilogy about humankind's first colonisation of a planet outside the solar system, you really don't have to read the trilogy to enjoy the story here.

Indeed, it's the author's voice is the first you'll hear on this Audible recording, explaining how the trilogy turned out to be incomplete and that there were a few threads and back stories he wanted to explore in this book, Coyote Horizon, and in a 5th book that is currently being written. After that narrator Peter Ganim takes over, telling the tale.

Overall I enjoyed the story very much. The characters were well defined - even though I had not 'met' them previously by omitting to read the trilogy first - the story line was always rich and well planned, and I was truly moved in the book's closing chapters

The setting for the story is a newly colonised planet (Coyote) which was all well and good, but I felt it drew a little too much on the Wild West Frontier, with people burning fish oil lamps and travelling on animals, all the while the colonist have data pads, sat phones and starships flying overhead. It just seemed to lack a certain amount of imagination. The planet itself never truly felt like an alien world. Still, perhaps that was explored more in the trilogy.

It was well read by American Peter Ganin, despite a few awkward moments when he attempted non-US centric accents. Peter's style may be a little too measured for British ears, but after an hour or so, I became more engrossed in what he was saying, rather than how he was saying it.

So, a decent book, well worth a spending an Audible 'credit' on and it was a chance to hear a work from a lesser known Sci-Fi author for a change. Recommended

I have read/listened to all the Coyote books plus the two spin off books, (Spindrift and Galaxy blues) and enjoyed them all, but this one is just all right. It is read well enough, but there is really very little going, as it follows one character's involvement with an alien religious cult, however at the end it does truly take off. I was tempted to stop listening half way along but am so glad I listened to get that ending. There are so many areas which might have been explored and were taken nowhere. Do not judge the rest of the series from this book