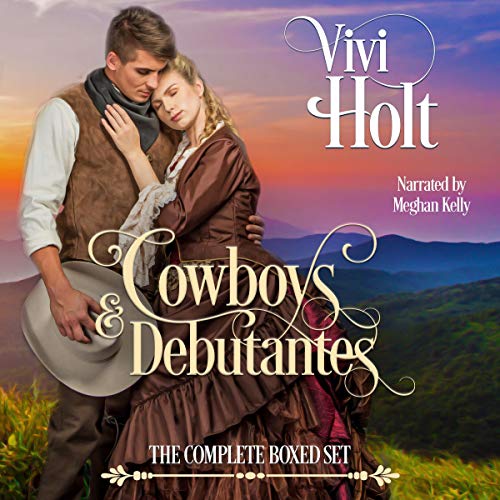 Three sisters who've lost their fortune are sent west by their father as reluctant Mail-Order Brides.

Three inspirational romances about finding love in the most unlikely places at a special price for a limited time.

Her father lost the family fortune, now she's leaving New York as a Mail Order Bride. Della Stout can hardly believe it when her father tells her he's lost it all - the money, the house, the servants, their entire fortune. But things only get worse when they inform her she's to be sent west, as a Mail Order Bride. When she meets her husband to be, she's less than impressed - by him and the dusty little town he lives in.

When Hattie Stout boards the train bound for the western frontier, she doesn't think things can get any worse. Her father lost his fortune and made her a pariah in New York society. Then, the man she was engaged to marry, backed out of the arrangement to marry his cousin. When her parents decide there is nothing left to do but send her west as a Mail Order Bride, she thinks she's hit rock bottom. She's wrong!

Sheriff Ed Milton is comfortable in the life he's carved out for himself in his small mining town. But he's never met anyone quite like Hattie Stout before. When she steps out of the stagecoach that fateful summer's day, she makes an impression he finds difficult to forget. She's beautiful, cultured, and obviously wealthy - so what is she doing in Coloma?

Can a bankrupt debutante become a stage coach driver?

Her parents put her on a train to the Arizona frontier to marry a man she's never met and didn't agree to marry. Feeling betrayed and alone, at first, she goes along with their plan. But before long she discovers the freedom that can accompany a pioneering life and grabs onto it with both hands.

Pearl's intended is Hilton Pullman, a local reporter for the Tucson Gazette. He's tired of being alone - his parents died when he was young, and his older brother abandoned him after losing his own fiancée. But when that trouble-making brother, Hank, returns right before the wedding, Hilton’s carefully laid plans are thrown into question.

Will Pearl marry her intended? Or will she forge her own path along the western frontier and discover love along the way.

What listeners say about Cowboys & Debutantes Historical: The Complete Series

I love the stories! so sweet and inspiring.. my favorite was the first story and the third story was not the least but I feel like there was a lot going on, on the plot it made my head spin. The second story was also sweet but I feel it was too short for me. All in all it's worth listening specially if you have chores to do!

The narration by Meghan Kelly is really good! I love her voice and delivery of the story.. it's very easy to listen to her. ❤

AN EXCELLENT BOOK SET. COWBOYS AND DEBUTANTES IS EXTREMELY WELL-WRITTEN AND VERY ENJOYABLE. FULL OF SUSPENSE DRAMA AND ROMANCE. THE STORY LINE FITS THE TIME PERIOD IN HISTORY VERY WELL.
STORY IS ACCEPTABLE FOR PEOPLE OF ALL AGES. NARRATOR WAS GREAT AND EASY TO FOLLOW.

Della
May 23, 2020
5 stars
Christian Historical Romance
What an interesting premise! Three sisters are forced to marry grooms unseen as their family fortune is lost and the parents send them off to become mail order brides. Della marries a small town banker but he’s got a heart of gold!

Hattie
May 24, 2020
5 stars
Sweet Historical Romance
I was surprised the sisters didn’t end up closer to each other! While several states away, poor Hattie is practically destitute after for marriage! Thankfully the sheriff can’t seem to stay very far away!
Trigger alert. There’s prostitution, physical abuse, and kidnapping in this one. While the sordid details are all fairly hidden, the situations are pretty major part of the story.

Pearl
May 25, 2020
5 stars
This book was so odd at first with the sighting of the unknown creature, but the end brings it all together!
I love Pearls rebellious and independent spirit! She’s a “firecracker” for sure! Although not too deep into the details of the second love story, there are two romances in this book and the best part is that they’re brothers!
The narration for this whole series was very good!

Wonderful Historical Western Romance, and mail-order brides Box Set. The stories are about three sisters, Della, Hattie, and Pearl and there sweet stories to love and HEA.

My favorite story was the first one I thought it was so cute and so sweet the second one I thought was really good in address issues of that day in book 3 I thought with perfectly although I didn’t like when she Rightaway told Hilton she didn’t want to marry him and crush his feelings when he was paying her way to be there. She could’ve had at least spare his feelings and so what happened but in any event it all ended happily and I loved all three books. The narrator was awesome and a narrator can really ruin a book. I recently got a Siri‘s box said and the narrator sounded like she was mocking people from Texas and I couldn’t listen to any of the 10 books in that series I was so angry! In any event that is not an issue with this book it’s awesome and if you love The mail order bride genre you will love these books they are all connected and they are great.

This is a wonderful collection of clean romance. Meghan Kelly is an amazing narrator that will keep your ears alive! She has a great voice that can do male and female voices to perfection!

This is a delightful set of three books written by Vivi Holt and narrated by Meghan Kelly.
It is about 3 young sisters who are sent away to get married to men of their parents' choices because the family is in financial ruin.
And so Della, Hattie and Pearl go their separate ways feeling very sorry for themselves and not happy with the idea that they don't know anything about their intendeds.
Each girl has her own remarkable story to tell and I felt I was sharing their adventures into their new lives and simply loved that about these stories.
The quality of the audio narration is really good and this helps bring these stories to life.
I requested and listened to the audiobook version and my review above is given voluntarily and is unbiased.

Ms. Holt knows how to draw her reader in with these short story. I couldn’t even begin to think how these girls felt losing everything from their families money to the life as they know it all to be sent to marry a man they didn’t know. My heart really went out to them. I listened to this in a box set seeing how each girl had to deal with her own issues. They show how strong they are, what they are willing to do, to make a new life for them. As things start going well there is news from home that may change each girls feelings on their new life.

The narrator did a wonderful job really making you feel the emotion of each girl as she goes through some very trying times. Things are easy for these woman who give so much of their selves. The character voices are wonderful, you always know who is talking and what they are feeling. Her male and female voices are given with strength and character. There are no repeating of words, no background noise, no volume changes. If breaks were taken I could not tell. This is one narrator I know I will enjoy listening to each time I pick up one of her new audios. I really look forward to listening to her voice.

I really enjoyed the twists and turns as the author hooks you from the first page to the last. It doesn’t take long for these woman to feel tragedy one thing leads to another as the author spins a delightful tale with action, broken hearts, tragedy and a love that will warm your heart. It is a short sweet Christian romance filled with excitement.

I really enjoyed these books. the stories were all good. I enjoyed the romances. the narrator was good.

Vivi writes three great stories of the three sisters who are mail ordered out by their parents when the family fortune is lost. Each sister deals with the stress and newness of the rough west after living easy, east cost debutante upbringings. I liked these stories by Vivi Holt. It is nice to have stories where you can just get away from life for a bit. :)

Meghan Kelly brings her great voice and characters to make the books even more special. If you want a good bargain (3 books in 1) and want to listen to 3 good, light and HEA endings, this Audible is for you!

I was given this review copy audiobook at my request and have voluntarily left this review.