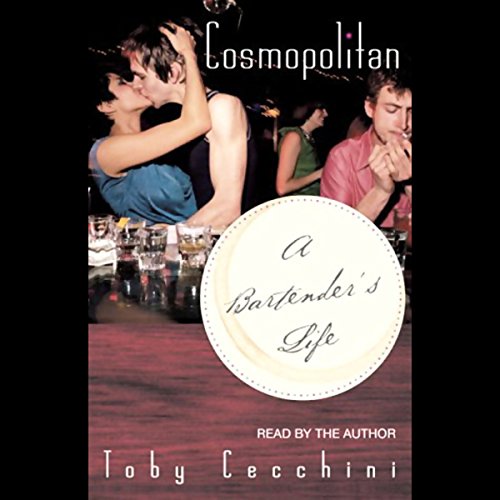 Cosmopolitan: A Bartender's Life is a memoir of the bartending life structured as a day in the life at Passerby, the bar owned and run by Toby Cecchini. It is, as well, a rich study of human nature, of the sometimes annoying, sometimes outlandish behavior of the human animal under the influence of alcohol, lust and the sheer desire to bust loose and party. It's not a pretty picture, but it's always compelling through the gimlet-eyed gaze of the author. As his typical day progresses, from the almost pastoral quiet of opening the bar and setting up to the gathering rush of customers dropping in after work to the sheer madness of catering to a crazed crush of funseekers, Toby Cecchini muses over a life spent in the service industry and the fascinating particulars of his chosen profession. Topics touched on include dealing with regulars, both welcome and not; sex and the bartender; cocktail connoisseurs (and drinks he refuses to make); learning the bartending ropes of the Odeon when young and newly arrived in New York; the sheer man-killing pace of keeping those drinks coming at flood tide; and the manifold varieties of weirdness and bad behavior that every bartender has to learn how to manage.

Of particular cultural interest is the author's account of his reinvention of the Cosmopolitan when he bartended at Odeon and his dismay as the drink went on to be bastardized by many thousands of bartenders and became a highly dubious indicator of urban sophistication.

Cosmopolitan is the hip, behind-the-scenes look at the frenzied and undeniably fun atmosphere of that great establishment, the bar. It does for bartenders what Anthony Bourdain's Kitchen Confidential did for chefs. Toby Cecchini is, by turns, witty, acute, mordant and lyrical in dealing with the realities of his job, shedding plenty of light on the hidden corners of what people do when they go out at night.

I was completely charmed by this book... It's not the most serious book I've ever read but I might rank it as one of the the most real. I'm a bartender myself, 7+ years now, and I'm almost comforted by the erie way this book reflects my life today. It's almost poetic. Since its only available abridged now I have to buy the book and actually read the original version.