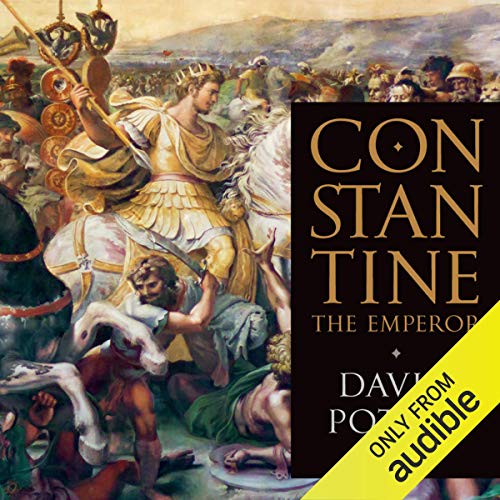 By: David Potter
Narrated by: Phil Holland
Try for $0.00

This year Christians worldwide will celebrate the 1700th anniversary of Constantine's conversion and victory at the Battle of the Milvian Bridge. No Roman emperor had a greater impact on the modern world than did Constantine. The reason is not simply that he converted to Christianity but that he did so in a way that brought his subjects along after him. Indeed, this major new biography argues that Constantine's conversion is but one feature of a unique administrative style that enabled him to take control of an empire beset by internal rebellions and external threats by Persians and Goths. The vast record of Constantine's administration reveals a government careful in its exercise of power but capable of ruthless, even savage actions. Constantine executed (or drove to suicide) his father-in-law, two brothers-in-law, his eldest son, and his once beloved wife. An unparalleled general throughout his life, even on his deathbed he was planning a major assault on the Sassanian Empire in Persia. Alongside the visionary who believed that his success came from the direct intervention of his God resided an aggressive warrior, a sometimes cruel partner, and an immensely shrewd ruler. These characteristics combined together in a long and remarkable career, which restored the Roman Empire to its former glory. Beginning with his first biographer Eusebius, Constantine's image has been subject to distortion.

More recent revisions include John Carroll's view of him as the intellectual ancestor of the Holocaust (Constantine's Sword) and Dan Brown's presentation of him as the man who oversaw the reshaping of Christian history (The Da Vinci Code). In Constantine the Emperor, David Potter confronts each of these skewed and partial accounts to provide the most comprehensive, authoritative, and readable account of Constantine's extraordinary life.

What listeners say about Constantine the Emperor

A nice survey of Constantine's life, utilizing primarily first hand documents to separate the man from the myth. Porter's biography of Constantine essentially paints Constantine as a pragmatic emperor and religious leader. Where he felt he could change things through battle, he would (and did). Where he felt like he could strengthen the empire through compromise and moderation he would (and did). His conversion to Christianity allowed him to weave parts of the empire together, and unify them under a divine "Mens Divina". He used Christianity as much as Christianity "used" him. Both were legitimized and strengthened by the other. That doesn't mean he wasn't a true believer, but mostly that his conversion (as told by Christian historians) might not have been as immediate. Perhaps, it was line upon line as Constantine became more confident in his new God.

It really is hard to imagine what place Christianity would hold globally without Constantine, or what exactly it would look like. Probably after Christ and Paul, Constantine might be considered the most influential Christian. He unified (mostly) the Church, gave it a safe place to grow, and sheltered it under the Aegis of the Roman empire. Potter does a good job of pointing out the complexities of Constantine and the limits of what we actually DO know about this influential ruler, Christian, and man.

That said, the biography sometimes gets lost in the weeds. I could have probably done without as much detailed exposition on details such as the Arch of Constantine. Sometimes, these expansions throw the reader off the narrative thread a bit. For the most part, however, it was a good biography. I walked away with a more complex and complicated idea of not just Constantine, but his father (Constantius), Diocletian, Galerius, and Maximian.

the reading is so robotic, absolutely no attempt at inference or any kind of inflection. The writing is just as robotic, I drive a lot and listen books in the car. I've had to stop this book several time as it will make me nod off in traffic. I would recommend the Constantine book narrated by Charlton Griffin.

I love history and I've powered through many a dry narrative over the last few decades. However, 'Constantine' takes the cake. The only way the book could have been made worse was with a terribly dry narrator. And that's just what this audiobook has, alas. Avoid.

What would have made Constantine the Emperor better?

Sounded like a computer generated reading of what is already some hideously monotonous content. Editor should have hacked away at this.

Interesting topic made very dull by the writing

This could have been a really interesting book but it was like reading a very dull history text book made worse by the dry reading.

Narrative is great. Very interesting and I will repeat this again to listen to. Thank You

Exhausting to listen to a perfect robot impression

The performance and production of the voice sound so much like a computer that I had to check out Phil Holland's other books to see if it was a code name for a model of voice synthesis. Turns out his other readings are less dry, and he actually inflects based on context at times. No so here. He pauses for commas robotically and consistently, and adds no more inflection to any sentence or word than would a computer with no knowledge of the words' meaning. I was enjoying the content, but it's exhausting to listen to a robot. You have to mentally add all the inflection, which for some reason is more difficult when you're listening. When you're reading, it happens naturally. On the up side, not many people could pull off such consistency. Phil Holland is a consummate professional.

Weirdly, the production seems to have trimmed out silence and breath, which clips the ends of words sometimes, making it sound even more like a robot. The producers of this audio miss the point entirely.

The book itself I do like, but the reading is so exhausting that even this crucial point doesn't matter.

Historically is was great.

So much information here to digest. Storyline rambled at times...then it would cycled back around. I'd love to see this book in a movie.

What a great emperor, administrator, and champion

Narrator best ever. The subject looms gigantic in history of conquest, court reform, military acumen, and of course Christianity. He wrote the Nicene Creed!

Potter lets Constantine off the hook. The man was a butcher, not a saint. This is a common trap with biography, when the author is infatuated with the subject, and Potter fell into it.

Don’t waste your time. Go wash your car instead.

If there was ever an audio book that would bore you to an untimely demise, then this is the one for you.
Firstly, there are only chapter numbers not titles. So if you wanted to skip the most boring bits, you simply had to randomly pick a chapter, not knowing what the heck you were going to be listening to. Also, the chapters were out of sync by two chapters ie the narrator would say chapter 4 but you were actually on chapter 6.
Secondly, I understand giving some background into the time leading up to Constantine’s reign, but the first four chapters of, in my view, the most unnecessary granular details of emperors’ reigns leading up to the main event, left me already becoming impatient.
Thirdly, on the subject of granularity, it’s a wonder we weren’t told about what kind of toothpick Constantine used when having a chicken dinner. There are details that need to be told and then there are details that best be left alone. To Mr Potter’s credit there were some details that were interesting. Even a stopped clock is right twice a day.!
Lastly, this author seemed to try to diminish the importance of Christianity in both Constantine’s life and the culture in general at the time. If Mr Potter quoted from a Christian author of the time, it was either excused for being biased or simply wrong. If the author quoted was pagan, then it was held to be more objective and credible. This theme of Potter’s became so prevalent throughout the book that one could easily be led to the conclusion that Mr Potter had a maybe not so subtle anti-Christian bias.
To conclude, when I either read or listen to history books, I wish to be taken on a fascinating journey back in time, while learning about people and places of long ago
The impression I was left with was one of irritation with unnecessary details and a clear indication of the author’s own biases. My advice is save your money or your credit and go wash your car instead. At least you’ll get far greater satisfaction.