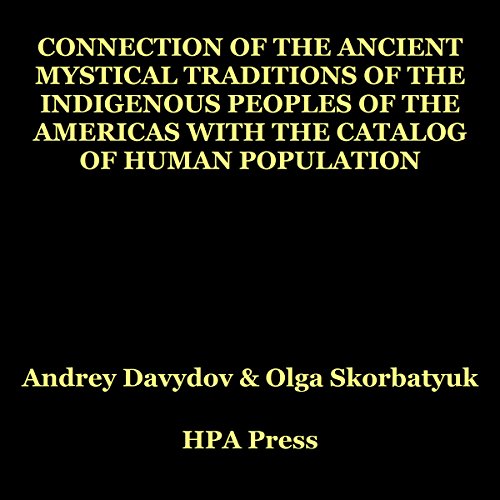 By: Andrey Davydov,Olga Skorbatyuk
Narrated by: Krystel Doudera
Try for $0.00

The indigenous peoples of the Americas have widespread beliefs related to personal guardian spirits. Natives believe that for any success in life there must be protection by a supernatural power. And, in this, they are absolutely correct. The Natives deified guardian spirits since ancient times; and, as it turned out, not in vain because they are directly related to people, to their psyche. All the guardian spirits of the ancient Natives were part of nature. The Natives made animals, plants, and so forth their totems, and not in vain, as they really gave people real power and real super abilities, made them powerful, invincible, were able to prevent diseases and heal, as well as avert troubles. Beliefs of the ancient Natives were true: kind guardian spirits exist. And it has been discovered that the relation between natural images and the human psyche is much stronger than it is currently thought. Scientists have found an ancient book, which is much older than the Bible and other sacred books. According to some researchers, it appeared in the 20th century BC. This book has been decrypted in the 80s of the 20th century in Russia by the researcher Andrey Davydov. It is nothing more than a description of 293 models of the human psyche, which are recorded by natural images. And, these images are very similar to those that ancient Natives worshiped. All these images are objects of nature: various plants and animals, luminaries like the sun and the moon, rivers, lakes, swamps, rocks, minerals, metals ,and so on. Among them there are deities, spirits, and chimeras. Natural images of psyche (soul) cardinally differentiate one person from another, even though every person's body is designed in the same way. They completely determine a person's character, habits, life algorithms, preferences, likes, aspirations, desires, and any actions; in other words, by nature every human is original. Any person can get incredible strength and power.

This is more of an advertisement to get you to their website. It has very little information.