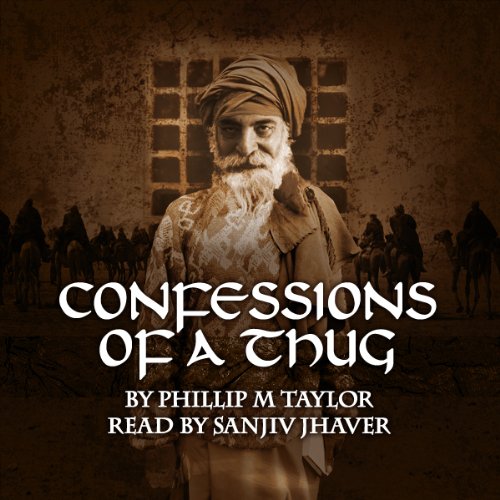 Confessions of a Thug

By: Philip M. Taylor
Narrated by: Sanjiv Jhaveri
Try for $0.00

Confessions of a Thug is an English novel written by Philip Meadows Taylor in 1839 based on the Thuggee cult in British India.This book is a tale of crime and retribution. Set in 1832 in India, the story lays bare the practices of the Thugs, or deceivers as they were called, who lived in boats and used to murder those passengers whom they were able to entice into their company in their voyages up and down the rivers.

Confessions of a Thug went on to become a best seller in 19th-century Britain. The book also became one of Queen Victoria's favourite novels. The story of the Thuggee cult was popularized by Confessions of a Thug, leading to the Hindi word "thug" entering the English language.

What listeners say about Confessions of a Thug

A timeless thriller - Most exciting book

I read this book when I was only 12 years old in URDU. Listening audio is always fascinating. The book written over 175 years ago still tastes like cognitive feast. Not in Victorian English it is easy to understand and all the terms are still very commonly used. Fantastic tale of crime, wickedness, royal courts of the era, bravery, suspense, romance distinguish and equitable details. It will take you in India 1830's. I love to see this in a Hollywood movie but movie (although The Deceiver was made) would not do justice with the book.
The only regret I have is the ill pronunciation of Hindustani language by Sanjive. Although, Sanjive speaks English in fascinating accent but he has murdered Hindustani words, slangs and Muhammadan words such as Inshallah, Ameen. I had to remove one Star. I wish he would have gotten help with pronunciation. Overall a book every Indian, Pakistani, British, American and anyone interested in ancient India should read. Must listen....

This interesting and LONG work is at best grotesque. The repetitive murder after murder, I mean I get it already! However Sanjiv Jhaveri narration drags you in. But good grief, how many repetitive scenario of enticement, travel, murder and burial do we have to listen to get to the actual tale of this poor demented souls life.
If you have a long drive, and a lot of time and patience, you will probably enjoy Sanjiv's soothing voice. But there are more than enough repetition to bore even the most stalwart listener.

This tale i found was something that did not capture my attention. So much so that after listening to about a third of it i went on to something else and have not gone back to finish it. I was aware of the Thuggee cult and was initially looking forward to an interesting tale but was dissapointed.

A bit wordy and dated

The book speaks of a time and place so long ago. A charming manner of story telling in the first hours, becomes a bore the longer it continues. A very interesting tale, but dated by the passage of 200 years since first authored.

The audio here is astounding... there's two narrators, one English and one Indian. It means the dialog between the two comes alive and sparkles, you can almost feel like you're there in the various scenes of swashbuckling and treachery... it feels so visceral, 1800's India truly comes alive. Hell of an adventure story too.

Do listen to this title, the writing is so fresh and when you listen it on audio too you find it exciting.

This is a real good book. Well narrated. Thanks to Audible for having this in store. I will recommend this to my family and friends.

confessions of a thug

Boring I expected a tale of the country it's people and it's to polite no one speaks like that. Sorry I down loaded