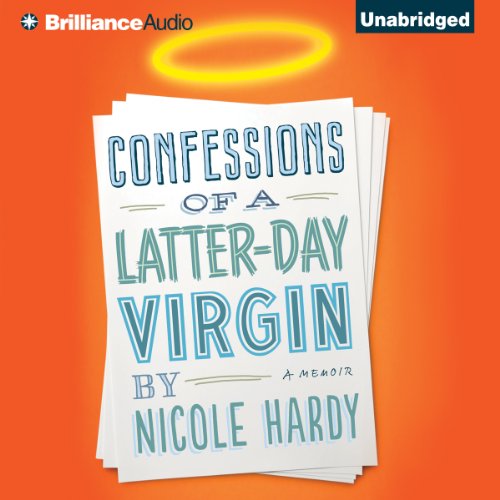 Confessions of a Latter-Day Virgin

Confessions of a Latter-Day Virgin

When Nicole Hardy’s eye-opening "Modern Love" column appeared in the New York Times, the response from readers was overwhelming. Hardy’s essay, which exposed the conflict between being true to herself as a woman and remaining true to her Mormon faith, struck a chord with women coast-to-coast.

Now in her funny, intimate, and thoughtful memoir, Nicole Hardy explores how she came, at the age of 35, to a crossroads regarding her faith and her identity. During her childhood and throughout her 20s, Nicole held absolute conviction in her faith. But as she aged out of the Church’s "singles ward" and entered her 30s, she struggled to merge the life she envisioned for herself with the Mormon ideal of homemaker, wife, and mother.

Confessions of a Latter-Day Virgin chronicles the extraordinary lengths Nicole went to in an attempt to reconcile her human needs with her spiritual life - flying across the country for dates with Mormon men, taking up salsa dancing as a source for physical contact, even moving to Grand Cayman, where the ocean and scuba diving provided some solace. But neither secular pursuits nor church guidance could help Nicole prepare for the dilemma she would eventually face: a crisis of faith that caused her to question everything she’d grown up believing.

In the tradition of the memoirs Devotion and Mennonite in a Little Black Dress, Confessions of a Latter-day Virgin is a mesmerizing and wholly relatable account of one woman’s hard-won mission to find love, acceptance, and happiness - on her own terms.

This Book Spoke to Me

As a sex-positive feminist who was raised in the Mormon tradition and learned as a young adult that it wasn't for me, I found this book to be very moving on a personal level. Nicole Hardy does an excellent job of conveying how frustrating a situation it is to be a woman with a prescribed life pattern set before you, not having your life pan out that way through no fault of your own, and being compelled to blaze new trails to self-actualization.

I had a hard time putting this book down, so to speak. I even got teary in a few parts.

Nicole Hardy's writing style and delivery are both articulate and sincere.

If you could sum up Confessions of a Latter-Day Virgin in three words, what would they be?

Compassionate, Interesting, Naive. I had compassion for Nicole Hardy while listening to the story, just as she had compassion for her parents, as she knew she would hurt them when she left the LDS and didn't want to hurt them. The book makes the reader think about religion and its role and what the reader himself or herself would do in such a situation. The reason I said "naive" is 1) I think Nicole Hardy is naive about men and relationships, and may have gone through some of the same obstacles even if she hadn't been LDS. 2) Her parents were naive about how unrealistic their expectations were. Everybody isn't able to keep to the upbringing of a sect like that. I had many of the same experiences growing up in another very strict sect that shuns, worse than LDS.

Some of my favorite parts were where Nicole is thinking of responses to the women who act like marital status is the only important thing about a woman. I loved the part where she was freed from that just by being out in the larger world and finding out it didn't matter so much to normal people.

I do think Hardy made entirely too big deal about her virginity. My advice to a woman in her position would be not to tell. Or in any case, don't let it be a big deal either way. Older virgins are not that rare--my doctor told me he sees plenty of them in his practice. I wish Nicole Hardy could have had my doctor.

The best line in the book is where Nicole wants to tell her parents "I don't believe sex is important enough for it to be as central to a person's worth as the LDS makes it" or something like that.

The funny boyfriend toward the beginning of the story. He was a hoot! I could just picture him.

What does Nicole Hardy bring to the story that you wouldn’t experience if you just read the book?

She is a TOP NOTCH WONDERFUL narrator! Please hire her to narrate more books!!! I couldn't believe the author was the narrator because few people have such a great voice, tone, and inflection.

When you don't fit anywhere, how do you carve out a place to belong?

Can't praise the narration enough. There are two places in the audiobook where earlier passages are repeated out of place. Probably some kind of glitch.

I consistently found myself looking forward to the next time I would pick up the book.

I listened to the audio version and the author did a really good job narrating.

PS. Others commented that this book was similar to "Eat, Pray, Love". This was not my experience.

Can't judge a book by it's cover

I listened to the entire audio book. It was done well she's a great author and a reader of her own material and has the perfect voice! I enjoyed her book for the most part however, I didn't care for the ending. Her story isn't necessarily unique in her struggles to be a Mormon single woman and are not only common enough but in her defense very real. The Church could do a lot more for the singles, but if they're not married by age 30 there are not really any single wards to attend for 30+ singles. Which is a shame. Her entire book centers around sex and she is right its easy for those of us to tell her that sex isn't everything when we are the very critics who haven't had to go without.

If you’ve listened to books by Nicole Hardy before, how does this one compare?

Her struggles being single and a Mormon and living up to her standards when she could have given in but didn't.

I hope she finds a good healthy relationship and tells us about it!