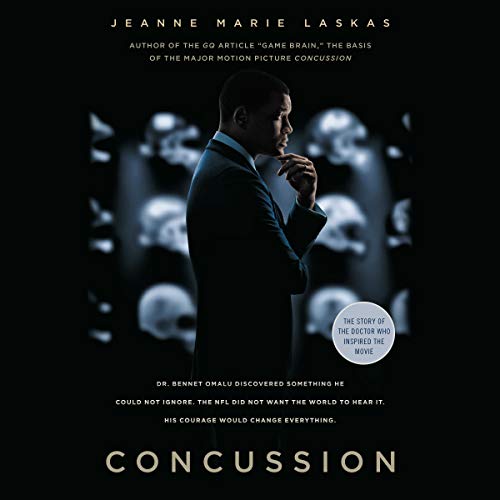 By: Jeanne Marie Laskas
Narrated by: Hillary Huber
Try for $0.00

The riveting, unlikely story of Dr. Bennet Omalu, the pathologist who first identified CTE in professional football players, a discovery that challenges the existence of America’s favorite sport and puts Omalu in the crosshairs of football’s most powerful corporation: the NFL

Jeanne Marie Laskas first met the young forensic pathologist Dr. Bennet Omalu in 2009, while reporting a story for GQ that would go on to inspire the movie Concussion. Omalu told her about a day in September 2002, when, in a dingy morgue in downtown Pittsburgh, he picked up a scalpel and made a discovery that would rattle America in ways he’d never intended. Omalu was new to America, chasing the dream, a deeply spiritual man escaping the wounds of civil war in Nigeria. The body on the slab in front of him belonged to a 50-year-old named Mike Webster, a.k.a. “Iron Mike”, a Hall of Fame center for the Pittsburgh Steelers, one of the greatest ever to play the game. After retiring in 1990, Webster had suffered a dizzyingly steep decline. Toward the end of his life, he was living out of his van, tasering himself to relieve his chronic pain, and fixing his rotting teeth with Super Glue. How did this happen? Omalu asked himself. How did a young man like Mike Webster end up like this? The search for answers would change Omalu’s life forever and put him in the crosshairs of one of the most powerful corporations in America: the National Football League. What Omalu discovered in Webster’s brain - proof that Iron Mike’s mental deterioration was no accident but a disease caused by blows to the head that could affect everyone playing the game - was the one truth the NFL wanted to ignore.

Taut, gripping, and gorgeously told, Concussion is the stirring story of one unlikely man’s decision to stand up to a multibillion-dollar colossus, and to tell the world the truth.

“A gripping medical mystery and a dazzling portrait of the young scientist no one wanted to listen to...a fabulous, essential read.” (Rebecca Skloot, author of The Immortal Life of Henrietta Lacks)

“The story of Dr. Bennet Omalu’s battle against the NFL is classic David and Goliath stuff, and Jeanne Marie Laskas - one of my favorite writers on earth - makes it as exciting as any great courtroom or gridiron drama. A riveting, powerful human tale - and a master class on how to tell a story.” (Charles Duhigg, author of The Power of Habit)

“Bennet Omalu forced football to reckon with head trauma. The NFL doesn’t want you to hear his story, but Jeanne Marie Laskas makes it unforgettable. This book is gripping, eye-opening, and full of heart.” (Emily Bazelon, author of Sticks and Stones)

"A gripping medical mystery and a dazzling portrait of the young scientist no one wanted to listen to...a fabulous, essential read." (Rebecca Skloot, author of The Immortal Life of Henrietta Lacks)
"The story of Dr. Bennet Omalu's battle against the NFL is classic David and Goliath stuff, and Jeanne Marie Laskas - one of my favorite writers on earth - makes it as exciting as any great courtroom or gridiron drama. A riveting, powerful human tale - and a master class on how to tell a story." (Charles Duhigg, author of The Power of Habit)
"Bennet Omalu forced football to reckon with head trauma. The NFL doesn't want you to hear his story, but Jeanne Marie Laskas makes it unforgettable. This book is gripping, eye-opening, and full of heart." (Emily Bazelon, author of Sticks and Stones)

I've listened to many, many books recently, have come across some pretty terrific ones, but this is the first one I've come to that merits perfect 5-stars on all counts. It's not just about CTE and the NFL; it's about a man on a mission, who he is and how he changes/survives. Yes, there's plenty on Nigeria, civil war, his depression... but that's the story: a scarred and battered man with not only courage, but plain, obstinate pluck. Courage is something we can all hope to be when stuff hits the fan. Pluck? That's Bennet Omalu, pure and simple.
This reads like a mystery, an adventure, a thriller, a brilliant character study. What the NFL did (and what individuals did to claim the discovery as their own) is galling and breathtaking. That Omalu was pretty much defamed, destroyed, discarded is tragic, but the man grew throughout and was/is/remains inspiring.
What makes this book utterly absorbing is Hillary Huber's masterful narration. I'm really, really picky about narration, and I get really twitchy when I come to a book that's heavy on one gender and is read by the other. That the main character from "Concussion" is Nigerian? Holy cow, I thought this would be pretty flawed. But Huber was magnificent, pulled it off not only without a hitch, but brilliantly. I was transfixed and transported.
I HIGHLY recommend this sobering yet exhilarating book. This is a credit that could NOT have been better spent. This was time that could NOT have been better used.

By far the best Audible book I've listened to so far. The story is wonderful and Hilary does a tremendous job narrating it. Bennet Omalu's story is unforgettable.

If you know, come forth and speak.

If "League of Denial: The NFL Concussions and the Battle for the Truth" (2013) is the story of brain injuries in the NFL, "Concussion (Movie Tie-In Edition)" (2015) is the story of the discoverer of chronic traumatic encephalopathy (CTE), Bennet Omalu, M.D., M.B.A., MPH, CPE, DABP-AP, CP, FP, NP - and yes, he's that educated.

I've been a conflicted fan of Bennet Omalu, MD, since I listened to Mark Fainaru-Wada and Steve Fainaru's "League of Denial." The Fainarus, brothers and highly regarded ESPN investigative reporters, say Omalu has "no filters." In my Audible review of their book called "How to Kill Friends and Influence People" (2013), I describe Omalu as having "the subtlety of Lady Gaga; and the social grace of Sheldon Cooper of "The Big Bang Theory".

After listening to Jeanne Marie Laskas' "Concussion" I realized I didn't even know the half of Omalu's lack of tact. It extends beyond a professional arrogance that Omalu might owe largely to having first worked for publicity hound pathologist-to-the-stars Cyril Wecht, MD (1931-present). Wecht is supremely confident and naturally combative, and Omalu emulated him as an adoptive American father. Omalu was so situation deaf, he gave his future wife, Prema Mutiso, clothes, telling her they were to make her look better. Omalu's lucky she married him anyway.

Omalu's status as an outsider (he is a Nigerian immigrant from a large, wealthy and very well educated family); his unfettered and unconventional approach to science (Americans don't take human brains to their homes for biopsy and long term storage); and his artless misunderstanding of how the NFL works (a multibillion dollar industry is NOT going to want to know there are serious flaws in its business model) are surely why he was able to identify Chronic Traumatic Encephalopathy (CTE) in former Pittsburgh Steelers "Iron Mike" Webster.

CTE is brain disease caused by repeated concussive blows to the head. The blows cause tau tangles, and tau tangles are a hallmark of Alzheimer's. Omalu published "Chronic traumatic encephalopathy in a National Football League player" in "Neurosurgery" in 2005. The result: he was professionally assailed and eventually banished to Lodi, a charming but remote farming community in the San Joaquin Valley of California.

Even in exile, Omalu continued his work CTE, publishing "Chronic traumatic encephalopathy in an Iraqi war veteran with posttraumatic stress disorder who committed suicide" (2011) in "Neurosurgery Focus." That paper wasn't mentioned in either "League of Denial" or "Concussion", but it's available in the National Institutes of Health's database, PubMed. The problem of Traumatic Brain Injury in soldiers is more fully explored in David J. Morris "The Evil Hours: A Biography of Post-Traumatic Stress Disorder" (2015). Suffice to say, Omalu's work has application far beyond football.

The support of several attorneys gutsy enough to take on the NFL and of Julian Bailes, MD, a former football player, team doctor, and respected neurosurgeon, helped make sure Omalu didn't remain in obscurity. Omalu's safely in the limelight now and not as vulnerable to the NFL. Omalu's played by Actor Will Smith in the movie this book is based on, "Concussion." I have no idea how close the book is to the movie, since the movie hadn't been released when I wrote this review.

The title of this review is the translation of the Igbo long form of Omalu's last name, Onyemalukwubew.

I am big fan of Scientific non-fiction, and as such was drawn to the story of an immigrant scientist fighting for what is right no matter the cost. The narrator really brought the story to life.

A true story of a man's unstoppable quest for truth against seemingly insurmountable obstacles. An inspiring testimony of how one man's faith, courage, humility, conviction, and grit discovered the truth; and overcame greed, power and corruption to save lives and fundamentally change our scientific understanding of brain injury.

not quite enough doubt in the story. With any new scientific discovery there is always an element of doubt, this story send to blame the NFL for lying, but does not do a great job of showing the doubt

We will be talking about this man and his CTE discovery for years to come a true hero.

I love the story, the theme, and the character or course. This is definately a must read

lengthy sweeping tale, of a grave injustice wrought by a powerful financial machine, and the nobility of a truly unique and dedicated scientist.

book ended out of no where