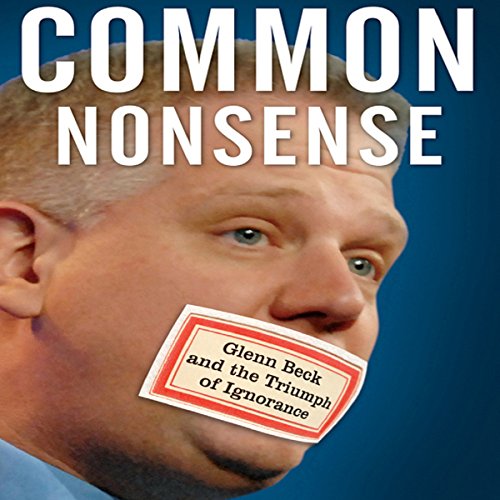 By: Alexander Zaitchik
Narrated by: Tom Dheere
Try for $0.00

Who is this guy and why are people listening?

Forget Rush Limbaugh, Bill O'Reilly, and Sean Hannity--Glenn Beck is the Rights new media darling and the unofficial leader of the conservative grassroots. Lampooned by the Left and Lionized by the far Right, his bluster-and-tears brand of political commentary has commandeered attention on both sides of the aisle. Glenn Beck has emerged over the last decade as a unique and bizarre conservative icon for the new century. He encourages his listeners to embrace a cynical paranoia that slides easily into a fantasyland filled with enemies that do not exist and solutions that are incoherent, at best. Since the election of President Barack Obama, Becks bombastic, conspiratorial, and often viciously personal approach to political combat has made him one of the most controversial figures in the history of American broadcasting. In Common Nonsense, investigative reporter Alexander Zaitchik explores Beck's strange brew of ratings lust, boundless ego, conspiratorial hard-right politics, and gimmicky morning-radio entertainment chops.

Separates the facts from the fiction, following Beck from his troubled childhood to his recent rise to the top of the conservative media heap.

Zaitchik's recent three-part series in Salon caused so much buzz, Beck felt the need to attack it on his show.

Based on Zaitchik's interviews with former Beck coworkers and review of countless Beck writings and television and radio shows.

Explains why Beck is always crying, why he has so many conservative enemies, why he's driven by conspiracy theories, and why he's dangerous to the health of the republic.

A contributing writer to Alternet, Zaitchik's reporting has appeared in the New Republic, the Nation, Salon, Wired, Reason, and The Believer.

What listeners say about Common Nonsense

Didn't tell the whole story. left out information that to make Beck look bad or crazy. Not worth the read.

What would have made Common Nonsense better?

I had typed a paragraph about this book, although, I had to erase it all and replace with one word...Garbage...

Would you ever listen to anything by Alexander Zaitchik again?

This book is TERRIBLE

Do not waste your time and money on this worthless book.

This book seemed to over portray Glenn Beck as the worst person in the world. There was not a single positive thing said about him from birth to present. But the book made it sound like the author was in bed with him, knowing every move and morsel of information. I have listened to Glenn Beck for years and somethings I don't totally agree with but this book showed him as the devil. I do not recommend.

Where does Common Nonsense rank among all the audiobooks you’ve listened to so far?

Well, this is one of the first nonfiction audiobooks I've listened to, and by virtue of its subject it was not a boring one. It may not have been an impartial book, but it was by no means boring, either.

What was one of the most memorable moments of Common Nonsense?

My familiarity with Glenn Beck's broadcasts come primarily from YouTube snippets of his more vehement rants and outbursts. I always got the sense the guy was disingenuous, what with the crocodile tears and all that silliness, so it was quite interesting to learn of his affinity for Orson Welles' "War of the Worlds" broadcast.It was also interesting to get a bit of a behind-the-scenes on some of his more memorable on-air spectacles.

Which character – as performed by Tom Dheere – was your favorite?

I suppose I should take a star away for Tom's reticence in portraying the racist supporters of Glenn Beck with more cartoonish zeal. The letters of support for Beck by these woefully ignorant and hate-filled "patriots" practically screamed for parody. But Tom Dheere took the high road, and did so through the entirety of his narration.

I'm not an extremist, so my reaction was even-tempered, which is more than can be said for many of the detractors of this book. While Zaitchik's own commentary is tinged with ridicule of his subject, the research and pacing are very well done. And being reminded of Glenn Beck's Vaudevillian approach to journalism and activism definitely offered frequent chuckles. On the other hand, the notion so many adore this huckster is nearly enough to weep for the nation.

If you love Glenn Beck and consider yourself one of the "true" Americans, you're going to find nothing but rage fuel in this book. If you're genuinely curious about what drives one of America's most notorious pundits, this is a pretty good place to start.