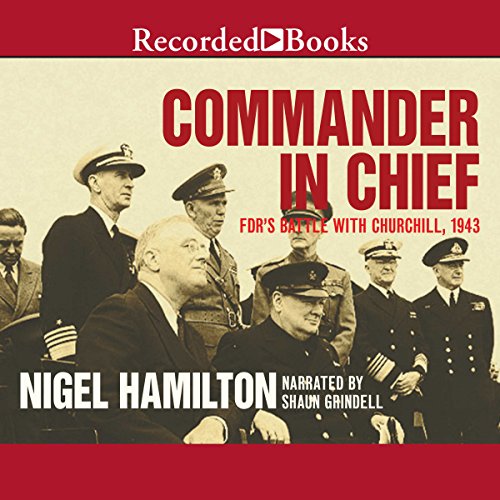 By: Nigel Hamilton
Narrated by: Shaun Grindell
Try for $0.00

In the next installment of the "splendid memoir Roosevelt didn't get to write" (New York Times), Nigel Hamilton tells the astonishing story of FDR's yearlong defining battle with Churchill as the war raged in Africa and Italy.

Nigel Hamilton's Mantle of Command, long-listed for the National Book Award, drew on years of archival research and interviews to portray FDR in a tight close-up as he determined Allied strategy in the crucial initial phases of World War II. Commander in Chief reveals the astonishing sequel - suppressed by Winston Churchill in his memoirs - of Roosevelt's battles with Churchill to maintain that strategy.

Roosevelt knew that the Allies should take Sicily but avoid a wider battle in Southern Europe, building experience but saving strength to invade France in early 1944. Churchill seemed to agree at Casablanca - only to undermine his own generals and the Allied command, testing Roosevelt's patience to the limit. Churchill was afraid of the invasion planned for Normandy and pushed instead for disastrous fighting in Italy, thereby almost losing the war for the Allies. In a dramatic showdown, FDR finally set the ultimate course for victory by making the ultimate threat.

Commander in Chief shows FDR in top form at a crucial time in the modern history of the West.

What listeners say about Commander in Chief

Having enjoyed a different narrator's style in book one of the trilogy, I was startled, then annoyed by the sing song,breathlessly urgent narration of this volume. It greatly detracted from my enjoyment of an otherwise excellent book.

I have read the first two books of the trilogy, "Mantle of Command" and "Commander in Chief". The last in the series is still to be published. Most WWII historical buffs have fallen into the Churchill trap "The history of the Second World War will be kind to me for I shall write it."

The first two books in this series by Nigel Hamilton, a British historian, have well portrayed the Churchill - FDR relationship from their first meeting in 1941 throughout the war. Mantle of Command covers 1941 and 1942 while this book, Commander in Chief, deals with 1943. Hamilton's research is from documents left behind by FDR and personal stories of eye-witnesses. Many of the stories take on a much different slant from descriptions in Churchill's work. From these two volumes the reader can see that from 1941 on FDR ran the war in spite of some of his own generals as well as Churchill. It is obvious the Churchillian role diminished in late 1942-43 although he did succeed in getting us involved in Italy which became a quagmire. The FDR-Churchill battle concerning the post-war role of the British Empire and its colonies is extremely interesting. It is sad FDR did not live to write a history as he drove the events from 1942 on. Hamilton, the author of the "Monty" Trilogy sensed this and has done a great job of presenting modern research to rewrite much of the FDR-Churchill relationship.

The Most Powerful Man in the World

If you could sum up Commander in Chief in three words, what would they be?

What other book might you compare Commander in Chief to and why?

The Mantle of Command. "FDR at War 1941-42. This is the forerunner to Commander in Chief and should be read first.

The issues surrounding Prime Minister Churchill were key and well developed throughout both of Hamilton's books. I lost a lot of respect for Churchill whose 6 volume History of WWII is supposedly the definitive history of WWII. Although I haven't read Churchill's books, Hamilton's books are based on factual evidence documented throughout, whereas apparently Churchill's volumes were not. However, Churchill was very loyal to FDR which was important to a unified Allied effort.

FDR and Churchill At War

Excellent books anyone interested in history will not want to miss.

Redundant with excruciating almost irrelevant detail. Poorly narrated by someone who can't pronounce German. The story ends before the Normandy invasion. Sorry I spent the money.