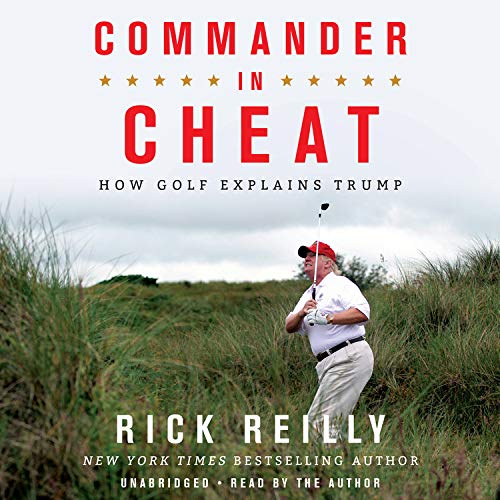 "Reilly pokes more holes in Trump's claims than there are sand traps on all of his courses combined. It is by turns amusing and alarming." (The New Yorker)

"Golf is the spine of this shocking, wildly humorous book, but humanity is its flesh and spirit." (Chicago Sun-Times)

"Every one of Trump's most disgusting qualities surfaces in golf." (The Ringer)

An outrageous indictment of Donald Trump's appalling behavior when it comes to golf - on and off the green - and what it reveals about his character.

Donald Trump loves golf. He loves to play it, buy it, build it, and operate it. He owns 14 courses around the world and runs another five, all of which he insists are the best on the planet. He also claims he's a three handicap, almost never loses, and has won an astonishing 18 club championships.

How much of all that is true? Almost none of it, acclaimed sportswriter Rick Reilly reveals in this unsparing look at Trump in the world of golf.

Based on Reilly's own experiences with Trump as well as interviews with over 100 golf pros, amateurs, developers, and caddies, Commander in Cheat is a startling and at times hilarious indictment of Trump and his golf game. You'll learn how Trump cheats (sometimes with the help of his caddies and Secret Service agents), lies about his scores (the "Trump Bump"), tells whoppers about the rank of his courses and their worth (declaring that every one of them is worth $50 million), and tramples the etiquette of the game (driving on greens doesn't help). Trump doesn't brag so much, though, about the golf contractors he stiffs, the course neighbors he intimidates, or the way his golf decisions wind up infecting his political ones.

For Trump, it's always about winning. To do it, he uses the tricks he picked up from the hustlers at the public course where he learned the game as a college kid, and then polished as one of the most bombastic businessmen of our time. As Reilly writes, "Golf is like bicycle shorts. It reveals a lot about a man." Commander in Cheat "paints a side-splitting portrait of a congenital cheater" (Esquire), revealing all kinds of unsightly truths Trump has been hiding.

"Building on his firsthand experience by interviewing scores of golf pros, caddies, and opponents, Reilly paints a side-splitting portrait of a congenital cheater." (Esquire, most anticipated books of the year)

"Sportswriting can be a lens into any part of our culture, and [Commander in Cheat] proves my point...a clever way to make sense of White House chaos." (The Week, books to read in 2019)

"Renowned sports columnist Reilly...has known the president for 30 years.... If Reilly was once a Trump favorite, he no longer will be.... [An] amusing, entertaining assessment of a congenital liar." (Kirkus Reviews)

"Commander in Cheat is one of the most surprising pieces of muckraking of the Trump era.... Reilly's right to say Trump sees a golf course like he does the Oval Office.... Every one of Trump's most disgusting qualities surfaces in golf." (The Ringer)

What listeners say about Commander in Cheat

I don’t think the casual person would like this book. But if you are a golfer and admire the game and all it stands for, then this book might be the most entertaining thing you read all year. I didn’t think it was possible to like trump less, but Reilly’s book, sticking only to golf and remaining apolitical throughout, paints the portrait of a truly despicable person. I’m gonna give this book to my father, it might actually be the most persuasive argument against trump for a septuagenarian brain! Most golfers are Republicans, which makes this actually in important work, and analyzing the moral character of a man through a sport like golf is a genius approach of psychological analysis. I loved to read Reilly’s sports illustrated back-page articles growing up. They were always great. This is right up there with some of his best work. Well done, Reilly. And most authors are horrible narrators and he was not. Bonus points!

I Loved it . R. Reilly narration is wonderful!

Bravo!!!! I believe this book is THE BEST book I've read, by far, that exposes Exactly who D.Trump is now & has always been throughout his life.
I have listened to many, many audible books on him from political, psychological problems, biographical upbringings, as well as his corrupt & unapologetic "business practices " & inability to think of consequences of his actions . He has Severe Narcissistic personality disorder & our lives are in his hands & that should scare the entire population of the United States.
I feel that the way this book uses the game of Golf to so perfectly parallel D. Trump's lack of integrity in every aspect of his life .It would be such an eye opening way for some of these Trump supporters to see him in this perspective .There are many people that love & Respect the game & can use it as a litmus test on a person's true self by the way they play the game of GOLF.
I loved Reilly's narraration! The stories, the impressions, the enthusiasm & the passion he has for the game of Golf.He was so entertaining and all the pieces fit like glove to drive home the intention of the book. It is much better ,in my opinion,on Audible because I don't know how it would come across to me if I tried reading it.

Not just for golfers!

I really enjoyed the audio version of this book. It felt like talking with a friend who was telling a morality tale in the context of the game. I learned a lot about both. Thanks, Rick.

Great book full of information i never would have known. it's interesting to see how 45 is doing exactly what he did when he opened new golf courses. he cheats, doesnt care for the rule's, blatantly lies about his expenses... and simply does not back down even when he is wrong. this book is full of history and great examples backed by names and verifiable sources. very well written.

I saw an interview he did about the book and liked how he told his stories. He’s a great narrator, he should do this more often. The short stories about Trump are pretty funny, and he gives a little history about golf’s past among previous presidents. I would listen to this again.

I can't stand guy's who don't play by the rules , cut in line, and driving a cart on the Green? Golf Was one of the last places that you could count on some decorum.There should have been more people standing up to that ass. How did they ever elect him president? and what does that say about all the complacent politicians who were just playing along. disgusting

An accurate summation of 45s morals through golf.

Every story helps me understand the Idiocracy that is Trump. Golf sets a baseline for character and ethics and Trump can belch whatever narrative he wants but his actions in the golf world speak his truth.

I highly recommend this book to anyone who has ever loved the sport or had someone they loved that loved the golf .It brought back memories of my dad and draging around a course a golf bag bigger than me. This is by far the best book I have read that reveals who Donald Trump truly is .Thank you for this entertaining and honest book

How true it is!