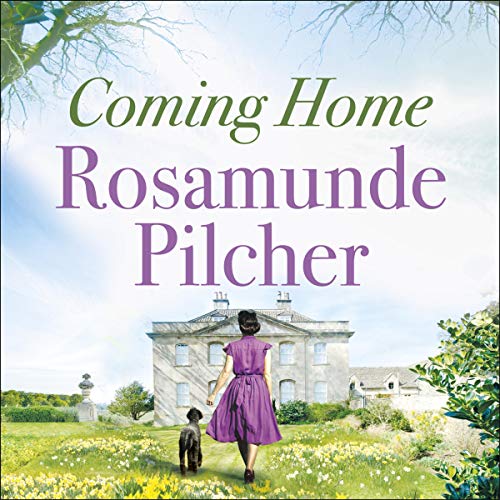 By: Rosamunde Pilcher
Narrated by: Helen Johns
Try for $0.00

Rosamunde Pilcher's best-selling, heartwarming tale of innocence and youth set during the 1930s.

Born in Colombo, Judith Dunbar spends her teenage years at boarding school while her beloved mother and younger sister live abroad with her father. When her new friend, Loveday Carey-Lewis, invites Judith home for the weekend to Nancherrow, the Carey-Lewises' beautiful estate on the Cornish coast, it is love at first sight.

She falls in love, too, with the generous Carey-Lewises themselves. With their generosity and kindness, Judith grows from naive girl to confident young woman, basking in the warm affection of a surrogate family whose flame burns brightly. But it is a flame soon to be extinguished in the gathering storm of war. And Judith herself has far to travel before at last...coming home.

What listeners say about Coming Home

love this author and wiekingcway through her works. Rather sad to be leaving the characters and their Cornish lives as WW2 approaches, overtakes them and resurface the other side. Really loved the performance too.

At first I thought I might have to send the book back, I found the narrator difficult to listen to, rather tremulous and wavering but I stuck with it and am so glad I did. After a short while I not only began to like the narrator but thought she did a really good job distinguishing between all the different characters.
Such a long listen that you become totally engrossed in the story, the characters and feel part of that tumultuous period of history. Typical Rosamunde Pilcher with everything being wonderful, money no object, everyone ravishing etc but that’s part of the charm and escapism.
I recommend.

A slow burner, but holds your attention

I read the reviews on this and was undecided for a while. Having decided to go ahead with it, I found it very slow at the beginning and it struggled to hold my attention.
As the story progressed and began to unfold, somehow suddenly I began to really listen and came to really like it. The narration irritated me first, but I gently succumbed to it without much effort.
As the end was closing nearer, I found that I really didn't want it too. I wanted to hear more about the characters and how their lives continued.

If you could sum up Coming Home in three words, what would they be?

The 1995 recording of Home Coming and the 2000 recording of Winter Solstice, were brillantly narrated by Lynn Redgrave. Full of Life , Deeply Heartfelt, Nuanced with an exquisite well trained and beautiful voice. I listened to these stories once a year and was transported completely to the two places of my childhood Scotland and Cornwall.

Unfortunately I lost the CD’s in a move. While I was eventually able to adjust to Jilly Bond reading Winter Solstice, and a few more of these newly released recordings ... this narration of Coming Home by Helen Johns is like nails on a chaulk board, sadly there is an actual under lying whinning to this poor women’s voice.I have looked at her acting reel on line - and she has far more depth of being and aliveness. I wonder if she had an underlying depression or melochlolia as she read this book ?
Having adjusted to Jilly Bond’s narrations, I was eagerly a waiting this new release and to hear this beloved and multi layered story, but I am struggling, and actually beginning to feel quite depressed as I listen to this young woman’s voice.

For people who love the spoken voice, radio plays and audio books, it is the quality and depth of training and perhaps lived experience, that is conveyed so deeply and intimately that we enjoy as a listener.

Sadly, these newly released recordings are flat and one dimensional. I was open minded and so wanted to enjoy these recordings but I think I will give up and look for used copies of Lynn Redgrave’s previous heartfelt recordings.

Every character is well crafted

One Star for effort ... please read my long review above

Rosamund Pilcher is now in her 90’s , I hope she has happy memories of Lynn Redgrave’s beautiful narration of her two wonderful novels Coming Home and Winter Solstice.
If I were her I would be deeply saddened by these one dimensional and unimaginative recordings released this year. This is not Shakespeare or Dickens but none the less these stories deserve love, appreciation and depth of resonance. I wonder who is in charge at this company that this awful recording would be released. I really wanted to adjust and enjoy - but sadly I am giving up.

What a depressing, thin and tinny voice this woman has. I have tried three times to listen to this, but have finally given up. I am sure the book is great (as all Rosamund Pilcher books are), but why not stay with Jilly Bond who can actually narrate. Audio books are all about the narrator. Take note.

Absolutely loved this book. The best audio book I have listened to. A fantastic, heart warming story and and with first class narration.
It is long, over forty hours, but I didn’t want it to end. I highly recommend this book and this author. I have already enjoyed several other books by her and plan to listen to more.

I was absorbed into the story from start to end. Now bereft as its all over. Will miss the Dunbars and the Carey-Lewis family. Takes you by the hand through loss and love before and through WW2

I loved this story, this is my favourite of the author's books so far.. Living in Devon myself and knowing Cornwall so well, it was good to hear of familiar places, it brought back so many happy memories of holidays in Cornwall. Very well narrated considering there were so many different characters in this story. Wonderful..

Rosamunde Pilcher’s books are captivating and moving, intricate stories about full and believable characters. This places a heavy responsibility upon the shoulders of an audiobook reader!

Helen Johns read this SO WELL that she became the voice of both Rosamunde Pilcher and my imagination. The whole thing was a treat from beginning to end.

Just a wonderful book, it moved me to tears and laughter - such a lovely, well written story of love and entanglements-loved it right til the very end x

A fan of Rosamunde Pilcher’s work, I thoroughly enjoyed this book.

Although it is long, I didn’t ever lose interest in the story, and warmed to the well-rounded and believable characters.

Helen Johns’ voicing of the various characters is amazing! The only fault I could find with her pronunciation is of the Sydney suburb of TURRAMURRA. Her Australian accent did not ring true in places, but this is a minor matter.

The story, set just before, during and after WWII, would appeal to anyone interested in this era.

For the last 4 days I’ve used every spare minute to listen to this story. Historical fiction is one of my loves and Rosamunde’s writing is very easy to read but what was so amazing was the narration by Helen Johns. What an amazing talent! Her gentle but expressive telling of the story, along with being able to manage a variety of accents seamlessly was truly wonderful. It’s what made this story so special. Thank you so much Helen.

Laughed, cried, got mad and fell in love with Helens voice. Lovely story, hope the next one is just as good

One of my all time favourite books.

I've read it twice myself, then thoroughly enjoyed listening to Helen read it to me. Her voice was perfect. The story is beautiful and the characters capture your heart.

Epic book
Awesome narration
Loved it. Wish it went on forever . What a writer. Highly recommend

i loved this story. it was happy and sad and i learned a lot about that era - things i thought I knew but didn't. i highly recommend this audio story.

This was my first by Rosamunde Pilcher, such a wonderful book can’t wait to read the next!

I'd read the book numerous times when I was younger and have enjoyed this just as much. It's a long book but I love it so much, I always wish it was longer. Great narration and lovely story.