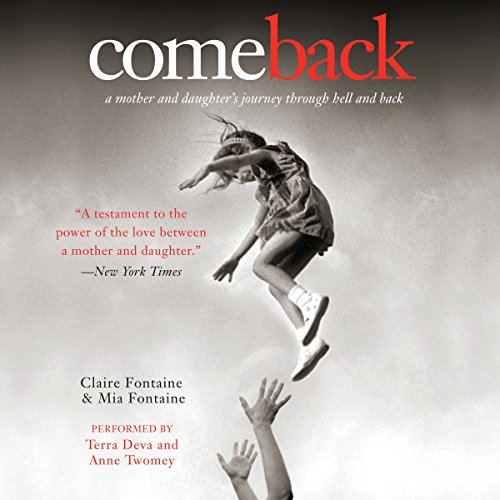 The unflinching true account of a teenage girl's descent into society's underbelly - and her mother's desperate and ultimately successful attempts to bring her back.

How does an honor student at one of Los Angeles's finest prep schools - a bright, beautiful girl from a loving home - trade school uniforms and afternoons at the beach for shooting up in the back of a van in rural Indiana? How does her devoted mother emerge from the shock of finding that her daughter has not only disappeared but had been living a secret life for more than a year?

Mother and daughter tell their parallel stories in mesmerizing first-person accounts. Claire Fontaine's story is a parent's worst nightmare, a cautionary tale chronicling her daughter Mia's drug-fueled manipulation of everyone around her as she sought refuge in the seedy underworld of criminals and heroin addicts, the painful childhood secrets that led up to it, and the healing that followed. Her search for Mia was brutal for both mother and daughter, a dizzying series of dead ends, incredible coincidences and, at times, miracles.

Ultimately, Mia was forced into harsh-but-loving boot camp schools on two continents while Claire entered a painful but life-changing program of her own. Mia's story includes the jarring culture shock of the extreme and controversial behavior modification school she was in for nearly two years, which helped her overcome depression and self-hatred to emerge a powerful young woman with self-esteem and courage.

An unforgettable story of love and transformation, Come Back is a heart-wrenching and humorous portrayal of the primal bond between mother and daughter that will resonate with women everywhere.

What listeners say about Come Back

A must read if you have a child in trouble

Of all of the books that have come out about teens in trouble, this is my favorite. Comeback is about a journey that many of us, as parents, have been on. This book assured me that I was not alone in my struggles with my teen and I have purchased several copies since its release to give to other parents who are struggling as well.

A Must Read for Parents of Struggling Teens

This book relates on many levels the struggles experienced by parents and children who have suffered trauma. It describes the horror of how trauma affects families and the arduous journey towards recovery. It provides helpful insights for any family going through something similar. And, importantly, it provides hope for those who are somewhere in the middle of the process... a vision that healing and joy are still possible.

This is an amazing, yet, true story that can hit home on so many levels.

Would you try another book from Claire Fontaine and Mia Fontaine and/or Terra Deva and Anne Twomey ?

I might consider another book from the Fontaines. This story definitely had its ups and downs... I just found the naivete of the mother to be so annoying that it was often very hard to sympathize with her plight at all! This is not really a book for people who have "been around the block" shall we say.

I liked Mia's relationship with her therapist towards the end of the story, as well as some of her time spent away at the school.

The narrator of the mother was cloying and insipid. I found her extremely 'voice over' type sound really difficult to listen to, especially in this type of story. It would have been significantly better to hear this from Claire and Mia themselves,

Could you see Come Back being made into a movie or a TV series? Who should the stars be?

uggh. It was already like a made for tv movie.

i found it reprehensible that they did not bother to mention what the stepfather was doing at the end of the story!!!!! (when they gave up-dates about all the relevant people's lives.)

A message to Mia

I had forgotten so much about this experience, the only memories I had were Richard Simmons, fried cheese and four leaf clovers by the basketball hoops. You and your mom gave me a piece of my life back. The stuff I should have held onto. It took me almost 3/4 of the book before I figured out who I was. At that moment I sank in my chair. I didn’t remember, but I remember now. You walking in as I left the office crying. I want you to know I’m sorry it set you back, sorry to all of the girls. I’m grateful it worked out for you in the end. I don’t know why I unloaded it all before I left maybe because I wanted so badly to prove to myself that I could be a good kid. To prove that I was still going to be a success story in-spite of leaving the program early. Unfortunately it was too soon, but I was almost an adult and thought I had learned enough. How wrong I was. My life has had many struggles. I’m in a much better place now, but I still have so much healing to do. Your book has inspired me dive back into that journey I started in Brno...to find my magical child again, maybe I’ll dance around the room to Bananarama. Thank you, for giving me back a piece of myself I had forgotten.

This was a great journey for a mother and daughter, seriously, through hell and back.

I loved hearing the transitioning of each of their lives. The narrators in this audiobook was easy to listen to

This book was inspirational, deep, and wonderful to listen to. Anyone who has or hasn't been through abuse or trauma can relate at some level.

This was not exactly what I was expecting but it actually made me think of life on a much deeper level. I thought it was going to a lot about the double life Mia lived but it was mainly about the recovery process. I will also say that at the beginning I was just angry with her mom, Claire, bc it seemed to me that she should have known and seen all this beforehand and it annoyed me with her. as the book went on I grew to be more understanding and have grown a better sense of empathy since finishing this book. The narrators do a good job as well, it was overall a very good read and lesson on being so quick to judge others who may be on the same destructive path as Mia took.

A most excellent listen

One of those books that you want to start from the beginning the minute you finish. Such an incredible journey.

This is a moving and surprisingly uplifting true story written (though not narrated) by a mother and her now adult daughter, detailing the harrowing events of her troubled childhood and teenage years.

I'm not normally one to read stories charting harrowing abuse, however the difference with this story is it focusses more on the love of a parent overcoming all, and is positive and uplifting overall. Narrated well despite not being by the authors.

Take a deep breath and allow yourself to fall...

I am not sure that one ''likes'' this type of book. It is raw, powerful, painful; an invitation into the places that are usually hidden from sight. This is also what makes this an exceptional story and one that I am grateful to have read.

The reader is invited to stand across 2 generations; witnessing the inner workings and growth of each. Mother and child are lain bare for us to greet them from those places within ourselves.

What does Terra Deva and Anne Twomey bring to the story that you wouldn’t experience if you had only read the book?

In retrospect I should have read this book on kindle and will be doing so. The narrators were great, but somehow there is a sense that by reading the words one can pause when needed; it will give time to reflect, integrate, weep.

A mother and daughter's stumble, to hell and back...

Gratitude to the authors... thank you for being prepared to make yourself so vulnerable that you invite us to do the same. The only way to grow...