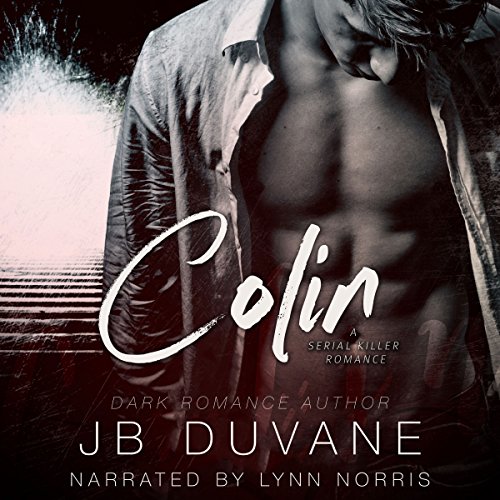 Beauty is his obsession...

It started with the mannequin heads.

They were my escape, my solace, my companions in the darkness.

But the day came when they weren't enough. That's when I started taking the girls.

I need to keep her with me...forever.

He should terrify me.

I've seen what he did to the others. How can I believe him when he says he won't hurt me?

But there's more to him than darkness. There's a terrible sadness.

And as strange as it sounds, a kind of beauty.

I wonder if I can ever make him see himself the way I do?

Please note: This is a dark romance with violent and unsettling themes of an adult nature that some may find disturbing. Colin: A Serial Killer Romance is a standalone novel of 66k words with a HEA.

What listeners say about Colin

Great story, but ending was abrupt & a surprise cliffhanger. Will he stop? Is it truly an HEA? What about their friends’ future? So many opportunities for a 2nd book on Colin & her. And a prime branch book on the other characters. Hope this is just the 1st book of Colin & Co.

A unique, if not disturbing story.

This is not the typical kind of dark romance with a killer that has reasoning we seem morally acceptable on some level or even just rational, such as a soldier or even an assassin. No, this young man just had issues with his parents that caused him to murder innocent young women. While I liked the themes of allowing someone the room to change and not be defined by the deeds they committed in their darkest hours, this wasn't just a one time deal, or even a one year long deal. Years and years of murdering women, and the connection between him and this woman causes her to let it all go. While I loved the story, it was beyond far-fetched. At least with the surgeon, it made some kind of sense but Colin was just... unwell. I was glad he had a happy ending and all, don't get me wrong, but man it was a messed up book and I've read some pretty messed up romances in my time. This one is far more taboo than most people will be able to handle and I would only recommend it to those that can suspend disbelief to listen to a good story rather than those looking for a swoon-worthy romance novel because it's unlikely you'll feel that way about it. That said, I did tear up at how deeply Colin had the capacity to love and feel as well as his horrible childhood but most killers have horrible childhoods and a bad childhood doesn't necessarily turn you into a killer so the moral reasoning is non-existent. I'd recommend it only if you can listen without thinking too hard about it and remember it's definitely not real.

This book was okay but not worth it. It's cheaper on Google Play and I still wouldn't buy it.scott

are you ready for this?

The reason I came to this is in the first place is that I am always game for anything narrated by the great *Lynn Norris*. First, there's the sheer pleasure of having her clear, mellifluous voice filling the room as I kick back and enjoy. Second, she's simply a genius at naturalistic dialog, and elevates the quality of everything she reads with lucid intelligence and deep but invisible emotional range. Love her character delineation. Her choices are impeccable, always. And she brings a side of lightly applied humor to the content. Always, always worth it, no matter what project she appears in.

(Plus, the book title was titillating. I admit I wanted to know more.)

Now, let's talk about the story. Can a college kid in her right mind fall for a serial killer? Who (spoiler alert) abducts her and holds her against her will? It's an extreme fantasy — Stockholm Syndrome and Co-Dependence On Steroids — and might represent the farthest end of the My-Love-Will-Heal-Him-And-Make-Him-All-Better spectrum, making my childhood fantasy of bringing Mr. Spock alive emotionally — the ultimate unavailable-man fantasy — seem like, well, child's play.

I'm a deep believer in bringing non-judgment to every encounter with another human being. Having worked at an agency that helps people involved with the criminal justice system turn their lives around, I've had strong friendships with people who've killed people, among other things, and we are all infinitely more than the worst thing we've ever done. But a love relationship with a serial killer, when you're little more than a kid yourself? Not a good idea, y'ask me. Way too complicated a pathology, way too malleable a mind; maybe one or 86 things to work out before you go all in, I think it's fair to say.

That said, the writing's pretty clean, plot-wise, though it's not stylish for my money, and needed some serious editing (e.g., "eyes big as saucers" used twice to describe the same character within a couple minutes; clichés galore; big ol' grammatical errors that contributed nada to character or color, in my view). For mindless fun, it's fine. It's certainly an original story idea, at least in my experience! And, as I said, Lynn Norris can read the phone book, or the cliché of your cherce, far's I'm concerned.

Would you be willing to try another book from JB Duvane? Why or why not?

If Lynn Norris is reading it, yes.

Have you listened to any of Lynn Norris’s other performances before? How does this one compare?

Yes, I'm a huge fan of Lynn Norris, and have heard several of her audiobooks; I go out of my way to check them out. She's always fantastically talented, and leaves it all on the table every time. Comparing one performance to another is apples to kumquats, as she is entirely committed to each book, seems to me, and is such a pro that her energy and her sublimation of ego to the text are always 110%.

Could you see Colin being made into a movie or a TV series? Who should the stars be?

Yeah, I could, if it were done in a tongue-in-cheek, Buffy the Vampire Slayer kind of way. Otherwise, the moral relativism would make for a lousy role model. No one in particular comes to mind to play the leads.

Check out anything read by Lynn Norris. It will be unforgettable.

The Serial Killer and the Student!

Avery has just moved to start college and she is intrigued by her next door neighbor Colin. From the moment that Colin ran into Avery he was drawn to her in a way that he had never felt before. When she enters his house to chase down her landlord’s dog her life is forever changed. Once she finds out the truth about Colin is there any way for her to escape with her life?

The writer did a good job of allowing you to see the inner workings of Colin and feel the dark tormented person that he was.

I enjoyed the narration as it was easy to differentiate which character was talking and it was clear and concise. I voluntarily reviewed a Complimentary Copy of this book

I am a fan of JB Duvane and this is my first audio book - easily to listen to and follow the story.

1st Audio book for me, I think I can do better narrating all voices honestly. I may have found a new direction in life!
If Colin's voice didn't sound like such an innocent vs. the beginning of the book, I may have felt different. I love JB Duvane as a dark romance author in print. The voice(es) especially Colin and Lincoln killed it for me.

If you could sum up Colin in three words, what would they be?

Yes it keeps you guessing

For honest review. I don't normally read this kind of stuff, but it was good very dark or ok sick. Colin is a serial kill of women and even his friend is a serial killer .Avery changes a lot of things ,but let's just say read this it's really good but messed up .I also got this as a audible wow I loved the reader and listen again it's even better on audible.

Colin by J.B. Duvane was a great dark read. Colin is a very twisted person that you hope will change his ways and redeem himself. Avery is a naive girl who finds herself falling for her captor. I enjoyed reading this book and seeing if Colin could find his happily ever after.

JB Duvane is an author whom I've read before. Lynn Norris is a new narrator for me. My review is not a synopsis of the book, but rather my opinion of it. I was voluntarily provided this review copy audiobook at my request. I thought this book was well written. It is dark and has some unexpected twists. I thought the ending of this story was great! The author did not disappoint. This is a standalone book and does not end in cliffhanger.

This is dark and twisted, but I loved it! Twists that I did not at all see coming. Scary, 'ew' moments. Great storyline and characters. Colin was well thought out, I hated him, liked him, felt sorry for him, then understood him. Avery, I didn't quite connect to her as much. I understand that she had issues too, it's just, I don't know - if it was me in her boots, I would have reacted differently, she kinda came across as more emotionless than Colin. Secrets, layers to each of them that all slowly come out. Did I mention dark and twisted? Would recommend though.