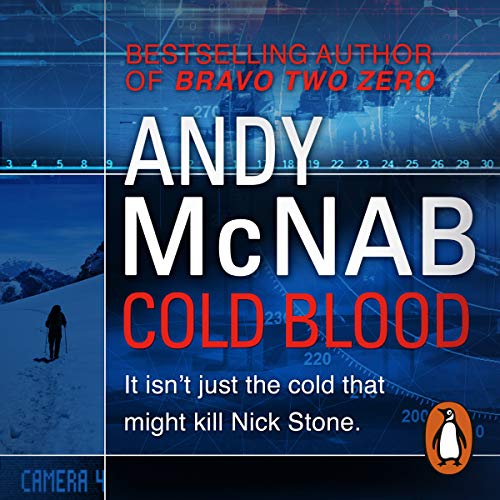 By: Andy McNab
Narrated by: Paul Thornley
Try for $0.00

Out on the ice, polar bears aren't the only natural born killers.

Nick Stone is suffering. The two people he cared for most are gone. Thousands of miles away, five ex-servicemen, badly wounded in Afghanistan, are preparing for a trek to the North Pole in an attempt to begin to rebuild their shattered bodies and minds.

When Stone is summoned as close protection for the trek by an old SAS officer, he accepts unthinkingly, desperate for the chance to escape his own misery. They meet at the world's most northerly airport, where the locals are as hard as nails and the polar bear threat makes it against the law not to carry a gun. But it doesn't take long for Stone and his team to discover that neither the bears nor the locals are the most dangerous predators in this part of the world. It is quickly clear to Stone that the coldest war of all is just beginning.

What listeners say about Cold Blood

As an all time fan of Mcnab's work, especially his Nick Stone novels, I might be bias when saying this book was awesome.

The great thing about it was the different style and storyline Mcnab has chosen compared to his other books. I don't think he has written a book like this before, it's a very different storyline which was refreshing to say the least.

If you like to watch Bear grills or other endurance specialists on TV, you'll love this book. It was a welcome change of pace and the exciting and gripping aspect of Nick Stone's adventures remained constant. Well worth a credit.

The setting of the story was perfect and the descriptive plot exciting. The delivery was however disappointing. I found the story difficult to engage with and found myself drifting away from the point, assuming there was a point. A very disjointed novel with no real conclusion and weak characters. The narration was fair and the reader tried to go into the characters. Regrettably one of the accents used sounded like the London Jamaican sound that all the chavs are into, and made the whole thing sound ridiculous. A waste of a credit in my opinion, but that's the thing with books. Sometimes the best covers are on the worst written books.

A Temperature Drop for Nick Stone

I have been an avid consumer of Nick Stone novels, so was keen to snap this new instalment up. I don't know if the temperature got to our protagonist this time, but I found this book very slow. A huge amount of time was spent milling around before the plot really got underway, and the ending was very confusing; relating to some sort of geopolitical subterfuge involving nameless groups from America and the former Soviet Union. I do hope this was a blip, and the next Nick Stone novel gets back to form. On a positive note, Paul Thornley's narration was very good - although as an ex squaddie, I found his pronunciation of REME as 'remy' rather than 'reemy' to be a little irritating!

Not a bad book by any means, passed the time just needed that bit more to be 5 star. Great narration

It would appear the author just needs to write for the sake of it! I have previously enjoyed his books but the last two??

Absolutely fantastic and a gripping storyline, I love the Nick Stone collection and can not wait for the next. Great detailed story which comes to life in my mind

not one of his best

it was okay. a nice listen. it just didn't grab me like other books of his.

Lots of action keeps you interested bit slow at first but builds up to the action , would recommend this book.

Another great Stone adventure. All the normal punch and gritty action. Well worth the money.

Not bad but not the best

Story was ok but not the best of the series, hopefully next one will be back on form.

Love it that Nick isn't a lone wolf anymore and the new characters bring great humour to the series, but authentic humour and it's slightly dark at times. Glad Paul Thornley has come back to narrate the last few books. How he switches between the accents of Gabriel and Rio and the Owl and everyone else - it's incredible!

The plot was only so-so compared to other McNab's. But the book was well worth the price for the very detailed description of how to go on an Arctic trek.