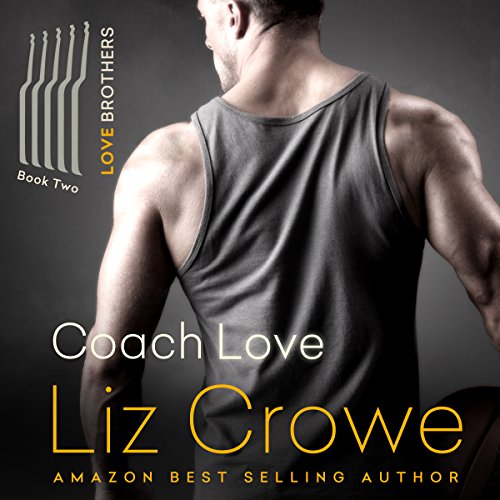 The smoldering intensity of first love - the forbidden fantasy of temptation - the cold hard facts of real life.

When one man's hopes are dashed apart in a split second after years spent chasing a dream, he returns home to Kentucky furious at the world and everyone around him.

Kieran Francesco is the middle son of the volatile, tight-knit Halloran-Love family. His role as peacemaker and the one true athlete is well established. He now faces life devoid of the sport he adores after a horrific, career-ending accident, which places him in a new and entirely uncomfortable position - that of the brother with no future.

Over the course of a few tumultuous months Kieran is plunged back into life at the center of the Love family, where he must cope with one self-destructive brother, one ill-timed reconnection to an old flame and a series of bad choices that land him in more trouble than he’d ever known existed.

Coach Love, Book 2 of The Love Brothers, a family saga of sibling loyalty that runs as deep and wide as the Ohio River - at least until Sunday, when Antony, Kieran, Dominic and Aiden work out their frustrations at the weekly Love brother pick-up basketball game.

What listeners say about Coach Love

What did you love best about Coach Love?

It is a story you can relate to about real people and real life issues.

Liz in her unique style with her twist and turns. She is an author who knows how to write and draw her reads or listeners in.

I thought he did an outstanding job, his voice fit the story to a T. He put a lot of emotion in it and painted a picture of the story Liz wrote.

Yes the narrator pulled you in to make you want to find out what the author had in story for you.

WOW I just do not know what to say, Liz sure throw a twist in this book. I never saw that coming. Just goes to show you when you think you know a character you need to think again. I totally loved this book, it is so touching and heartbreaking. Liz puts a twist on her stories that are so unlike anything I have ever read. This poor family just keeps getting hit with more pain than it can take.

Liz in her unique style makes you laugh, want to cry, leave you with your mouth hung open saying OOOOHHHH my god as she spins a tale of a family barely holding it together trying to find their way in life with many bumps along the way. I have totally loved the entire Love Brothers series, I have to say this is the best one yet. Each are unique and worth the read as Liz tells it like it is with a complicated family who is just putting one foot in front of the other as they make a mess of their lives as they try to bring it around to live another day hopefully with the person they love.

Liz has an easy style of writing a complicated life, her words flow easy and she draws you into the life of her characters. She gives you a page turn that her readers will not want to put down. She never leaves you behind but pulls you forward as she writes a story of pain, heartbreak with love. You never know who her characters will end up with until the end. It has a wonderful happy ending but is sad at the same time. Liz you did a wonderful outstanding job I totally loved this story.

The narrator did an outstanding job making you feel the emotion the author put in her book. He is a wonderful credit to this story.

I love the dynamics of this family! The characters are real and flawed. Funny and heartbreaking. I love learning more about them. The narrator did a great job. Can't wait for the next book!

Coach Love, second book in Liz Crowe's Love Brothers series, picks up where Love Garage leaves off. Kieran Love, back home after a Joe Theismann-level injury in the NBA, must come to terms with all of his past's frustrations before he can move forward with his life. An ex-girlfriend, career disappointments and discoveries, family strife, and the hope that it's all going to work itself out move this tale of redemption forward. Life in Lucasville, KY is never simple, but the ride is always worth the price of admission.

I'll Stick to the eBooks

Liz Crowe once again crafts a tangle of two love stories in one book. The entire Love family is present with their antics, making readers feel as if they're sitting amidst the family, but its the gradual reconnection between Kieran and Cara that grabs your heart.

Again, I have to be honest... I tried it on audiobook again and I definitely can't do this narrator. I'll be finishing the series in ebook.