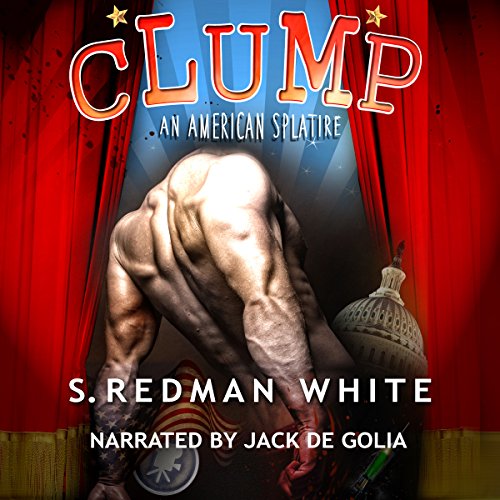 Clump is a man with no known name, no known past and, most importantly, no head. The huge, heavily muscled giant lacks any awareness of the world around him but miraculously becomes the most popular entertainer in America.

Clump's medical and media handlers must manage his skyrocketing career as a music video star and create a wholesome, family-friendly public image...while concealing the inconvenient fact that the headless man is homicidally dangerous when touched.

A so-called "splatire" owing to the mix of razor-sharp comedy and graphic violence, Clump's satiric targets include the entertainment industry, medicine, journalism, corporate greed and ineptitude, politics, and a morally vacuous culture that increasingly and enthusiastically embraces the brainless.

Stylistically, Clump is like a head-on collision between Kurt Vonnegut, Jr., and Chuck Palahniuk. It is not for the faint-hearted, the thin-skinned, or the unadventurous, but is an all-you-can stomach buffet for those who like their comedy dark and their social commentary barbed.

There are literally no words.

I mean, I have to write some, so there will be words, but this is hard to discuss in a rational and sane manner.

Ok, this is a tale that was wallowed in weird, smothered in strange, bathed in bizarre, and injected with incredible concepts. You come away feeling like you just read some mind altering lovecraftian text and that your sanity is now in question.

It is my understanding that the author had to write tamer stories than he preferred, and once he was able to do something on his own he just kind of went nuts and did every crazy thing he could think of, and thus Clump was born. It reminds me of how comic book writer Mark Millar felt when he finally got out from under Marvel's thumb and he wrote his comic series, Wanted. He put in every depraved idea he could just because he could. So, in essence, Clump is a diamond that was formed after years of intense heat and pressure. Something that was just bursting to get out.

Lucky for us that is the case. Clump is a fantastically fascinating read, especially for a book whose main character lacks a head. This is most certainly not a book you will ever forget. It is like an ear worm, once you've heard it it will stay with you.

Jack de Golia, who seems to do a one man command performance helps you keep your head on straight. Pun not intended. He really paces the story well, and he rolls out some characters in an unbelievable fashion. I believe he stated that he did 88 total voices for this book, which is one heck of an impressive amount of vocal acrobatics that would cause even Mel Blanc to tremble. Undoubtedly a Gold Medal winner, and probably deserving of a Grammy.

Don't miss out on this book!

Being There ... on steroids

The book was a fun listen. The narrator was versatile, reminding me a little of Hiaasen's narrator, George Wilson, one of my favorites. The take off on Steinbeck was hilarious, much in the same way the book seemed a take off on Jerzy Kosiński's Being There, with Clump in the Chauncey Gardiner role.