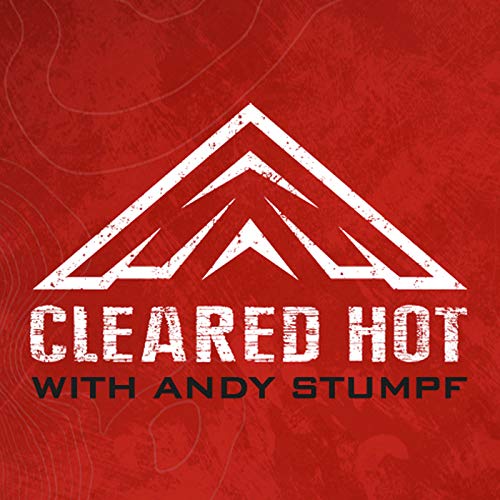 What listeners say about Cleared Hot

Throughly enjoy the perspective and background of the host. Keep it going man, thank you!

Amazing outlook on life and interesting to listen too. Something both me and my husband enjoy listening to.

It's worth your time.

Cleared Hot became one of my favorite podcasts almost as soon as I started listening to it. Andy Stumpf has a refreshing perspective on things you might not expect at first glance. Informative guests and topics, but never an episode that doesn't earn me sideways "tf is wrong with that guy" glances as I'm bent over laughing with my earbuds in.

This podcast is rad!!!

This is great listening for any and all occasions. Andy has a unique perspective encased in a humorous delivery that will keep you laughing or saying “oh shit”. Give it a listen, enjoy.
You’re welcome 🤙🏻

With his diverse background and insane life experience, Andy helps navigate the way through this shitshow we call life in a very entertaining manner. While not an expert on anything (right, Andy?) he still knows a lot and delivers it in a fun manner. Highly recommend this podcast!

For some time I've followed Andy and the cleared hot channel on YouTube. Now the series is available on here its going to make my commute to work far more interesting. Andy has some fantastic and interesting guests as well as some of his own equally interesting stories as a tier one operator. We'll worth a listen!

One of my favorite podcasts out there right now

Cleared Hot is a podcast that's currently available in two different formats; Monday we get a longer, interview-style podcast with a guest, and Friday we get 'Full Auto Friday' which is a shorter format where Andy answers questions (5-6 of them) with a time limit of 5 minutes per question. Questions range from relationship problems, motivation, and Andy's thoughts on current political and military events. Andy is a humble, funny individual with a really healthy dose of self-awareness. He'll tell you when he doesn't know something, straight up.

Host that offers a laid-back, welcoming, and friendly 'interview' environment.

Interesting and diverse guests ranging from former colleagues in the SEAL teams, and other military branches to civilians working with crushing human trafficking.

An open and honest conversation with a (for me) perfect blend of serious talk and jokes.

If you're like me and really enjoy listening to stories, experiences, and thoughts about military life, hunting, kicking evil peoples' asses and some immature humor you're going to love Andy's show.