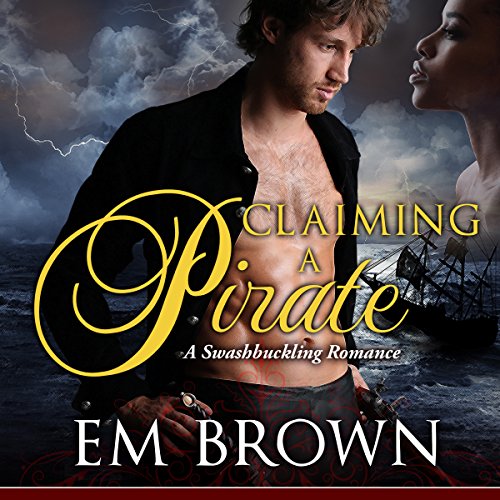 Of all the miserable luck. Of all the people, it had to be him.

Considered the scourge of the Atlantic by the British, the dread pirate Captain Adanya Mbwana fears nothing - except the past. When she finds herself stuck on the ship of the very man she ran away from five years ago, can she withstand the rush of feelings she thought long buried? Can she resist his hot and demanding touch?

Adanya wants nothing more than to escape before she does the unthinkable and falls in love with Dominic all over again, but Dominic intends to make the proud and indomitable Captain Mbwana his for all time.

What listeners say about Claiming a Pirate

love it, awesome narrative easy tone to keep your attention and follow story line, thanks.love it,

Given the time period I had to remember cleanliness wasn't a high regard. Other than that, the story was okay.

I liked this story. I liked their history together. I liked their final reunion. I wish the story was more detailed. I would have loved an epilogue.
I assume they had a baby or settled down.

The audiobook was a bit on the short side. I did enjoy the plot and the narrator. I was impressed considering the narrator is the same as the author and not a professional. She did a very good job. Sometimes when the narrator is the author and not a professional it doesn't work out very well, but in this instance the voice showed a lot of emotion. I really enjoyed the audiobook, just wish it was longer. I was given a free code to listen to this audiobook and leave an honest review.

I received this book at my request in exchange for an honest review.

This book opens up when Captain Adanya Mbwana and her crew are being hunted by British soldiers. Her crew decides to save her by throwing her overboard. If it was me I would have been super pissed no matter what the excuse was bu that is just me. while she is stewing about her fate she gets 'rescued' by her old buddy, Captain Dominic Bold. They have a long and sorted past with one another and we see why both of them have been trying to avoid one another all this time.

I enjoyed the narrator but I did not like the story. There is just something about it that I did not like. There isn't anything in particular just something. I think it is because it was not finished. This books just seems as though it should have been longer and that it needed to continue because a lot of the scenes where left unfinished. It was not bad just not complete.

This was a great short story for a morning commute. I just wish there was more story or a sequel to find out what happens next. Really enjoyed the story and characters.

The story was a bit flat to me. Still worth a listen but it’s not really one I’d listen to again. That’s just me don’t let that stop anyone from listening to this book. Narration was better than some others but still there are better ones out there than yourself.