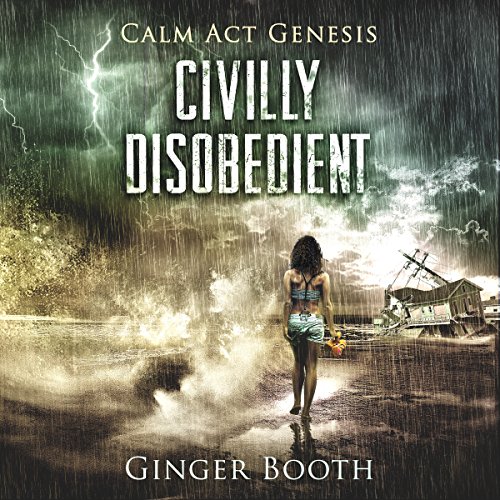 The storms before the calm.

Resourceful programmer Dee Baker is getting worried about climate change. Food prices are skyrocketing, the drought out west deepening, and the storms won't quit. When her intrusive Fortune 100 media employer forbids her to attend the worsening riots, Dee defies them to visit a rally, and see for herself what they're trying to hide.

Calm Act Genesis is a collection of short prequels to the Calm Act series.

What listeners say about Civilly Disobedient

A look into what's to come.

In this we meet Dee, the main character for The Calm Act series. This is a prequel to the series and gives us a glimpse of what's to come. Dee has been forbidden by her employer to attend any of the rallys happening. Interested to see exactly what is happening, she attends one anyway.

This was a quick look into what's to come. It gives us a taster of the world and characters in the Calm Act series and is intriguing enough to make me want to read book 1 and see what happens next. It's a quick and easy read!

The author narrates this and I will say that she is clear and easy to listen to, but she didn't really perform this, she just reads it. Her tones are very similar for each character and was often hard to follow who was talking.

If you could sum up Civilly Disobedient in three words, what would they be?

As a big fan of the entire Calm Act series, this was great fun. It's a perfect prequel because it's a snapshot of the protagonist and her world just as everything was about to change; you can see the "genesis" of later events and themes. It would probably hold up very well as a standalone novella as well.

Have you listened to any of Ginger Booth’s other performances before? How does this one compare?

No, and I was a little nervous since I don't usually enjoy authors reading their own books. But this is a fine, intelligent, understated reading. Booth has a lovely voice.

No, I just thoroughly enjoyed it in the context of the series, which I'd already read.

Special treat for the listener: read by author.

Would you consider the audio edition of Civilly Disobedient to be better than the print version?

Both formats have their strengths, and I've both read and listened to this book. I think that having the author read the novel gives both an insight into her art and also a particular pleasure.

This audiobook is the first of two pieces of short fiction collectively called The Calm Act Genesis. These two novelas provide the reader with an entertaining story, while providing background on how the climate crisis first affected the people of the United States.

We meet Dee Baker, the lead of all 3 Calm Act novels, who decides to attend a protest rally in Philadelphia after her company stipulates that no employees can attend it. This novel is set at a time when the United States is still functioning more or less as it does in our own time, before the crisis worsened, and before the border closings of the Calm Act seal the United States into “super states” without rights of transit.

The protest rally is met with government resistance and Dee acts heroically, foreshadowing her future as an important contributor to the future state.

I think the scene where Dee helps organize the boathouses into aid stations is a terrific scene and gives us an insight into both her empathy and organizational abilities.

On the edge of the future, climate change comes crashing down on the city of our independence.

I strongly recommend the entire series for the entertainment and edification of the listeners/readers.

This was Excellently done

Though this I'd a fictional story it is actually a Story of just about where we are and where we are headed. I hope others read or listen to this book because People this his is a Real possibility.

Impact of decisions and actions

The narration was marvelous. It was like listening to an old-time radio theater performance. The content is definitely food for thought. This intriguing story really made me think about what's happening and our reactions: what they are, and what they should be. How much can we/should we compromise our ideals for a 'greater good', and who is to decide what that is? And is it the same 'good' for everyone? Decisions and actions need to be thought through, but all opinions should be heard.