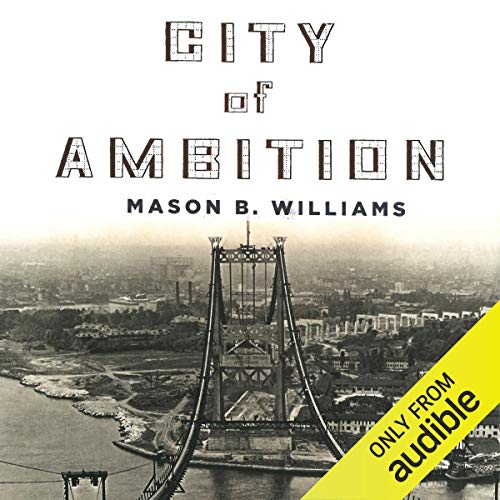 By: Mason B. Williams
Narrated by: Ira Rosenberg
Try for $0.00

Two political titans forge a modern city and a vibrant public sector in this history of strong leadership at a time of national crisis. City of Ambition is a brilliant history of the New Deal and its role in the making of modern New York City. The story of a remarkable collaboration between Franklin Roosevelt and Fiorello La Guardia, this is a case study in creative political leadership in the midst of a devastating depression. Roosevelt and La Guardia were an odd couple: patrician president and immigrant mayor, fireside chat and tabloid cartoon, pragmatic Democrat and reform Republican. But together, as leaders of America's two largest governments in the depths of the Great Depression, they fashioned a route to recovery for the nation and the master plan for a great city. Roosevelt and his "Brain Trust" - shrewd, energetic advisors such as Harold Ickes and Harry Hopkins - sought to fight the Depression by channeling federal resources through America's cities and counties. La Guardia had replaced Tammany Hall cronies with policy experts, such as the imperious Robert Moses, who were committed to a strong public sector. The two leaders worked closely together. La Guardia had a direct line of communication with FDR and his staff, often visiting Washington carrying piles of blueprints. Roosevelt relied on the mayor as his link to the nation's cities and their needs. The combination was potent. La Guardia's Gotham became a laboratory for New Deal reform. Roosevelt's New Deal transformed city initiatives into major programs such as the Works Progress Administration, which changed the physical face of the United States. Together they built parks, bridges, and schools; put the unemployed to work; and strengthened the Progressive vision of government as serving the public purpose. Today everyone knows the FDR Drive as a main route to La Guardia Airport. The intersection of steel and concrete speaks to a pair of dynamic leaders whose collaboration lifted a city and a nation. Here is their story.

What listeners say about City of Ambition

What you always wanted to know about NYC

I would recommend this book to a friend, who, like myself, is fascinated by the physical features of New York City and its infrastructure and by the people and politics that led to their creation.

The interplay of politics, personalities, and physical feats of planning and construction.

Have you listened to any of Ira Rosenberg’s other performances before? How does this one compare?

I have listened to Ira Rosenberg's other performances. I think this one was particularly well read. Mr. Rosenberg's cadences and phrasing made it easy to parse the rather dense and complicated sentence structure favored by the author. Enunciation was accurate and Mr. Rosenberg's tone and modulation was easy on the ear throughout.

It takes two to tangle?

The story was good enough to keep me listening to the end, but it was much more about the politicians than about the city of NY. If you aren't a fan of political science, then this probably isn't for you.