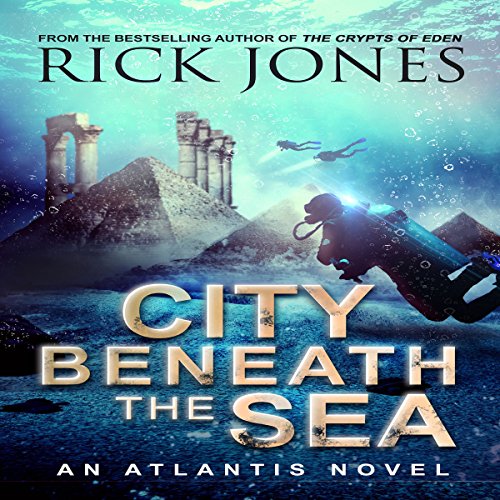 City Beneath the Sea

By: Rick Jones
Narrated by: Jonathan Johns
Try for $0.00

An earthquake off the Florida Straits uncovers a city that had been hidden beneath the sea for centuries. It's a land of dark miracles and black wonders, and a place that harbors extraordinary secrets and deadly curiosities.

Months after their narrow escape from Eden, archeologists and symbologists John Savage and Alyssa Moore are called upon to examine archaic texts inside the presumed city of Atlantis. The writings are similar to those discovered in Eden, the symbols a roadmap to mankind's destruction by the year 2026. Along with a commando unit, John and Alyssa quickly discover the pitfalls that were created to keep a fabled relic safe. After deadly challenges and conquests within the structures, they eventually come across the Emerald Tablet - -the legendary plaque that holds the secrets of the universe.

But is the Emerald Tablet truly a source of great power and knowledge? Or is it disguised as Pandora's box that once opened it would quickly mark the beginning of mankind's end? From the best-selling author of the Crypts of Eden and The Vatican Knights comes book four of a John Savage and Alyssa Moore adventure (The Crypts of Eden trilogy), and book one in the Quest for Atlantis series, City Beneath the Sea.

What listeners say about City Beneath the Sea

An interesting topic that felt scattered

I don't know if it was because I wasn't in the right mindset to read this book or what, but it just felt like it was a little all over the place. I've been reading a lot of Rick Jones thrillers recently and this felt really out of place for him. Normally the stories have distinct and set storylines with what feels like well thought out story arcs. City Beneath The Sea felt a little like he had an idea and ran with it without planning everything out.

Even with all of that said, I still found myself enjoying some of the story. And to be honest, it felt like I was missing something. I know that this is the first book in the Atlantis series, but about half of the book was calling back to Eden. Upon a quick Amazon search, I realize that there is a three book Eden series. I'm betting if I'd read that series that the parts of this book that confused the heck out of me would have made much more sense.

I'm going to leave my review as a 3, but if I ever read the Eden series, I will come back and re-read this story and re-rate it.

The narration for City Beneath The Sea was done by Jonathan Johns who did a really nice job. I didn't have any problems or issues with the narration, quality, or pacing.

Overall, if you haven't read the Eden Series, you might be a little lost while reading this. I would pick that series up first before considering this book.

This narrator is boring to listen to. I believe the story would be good, but I can't listen to this guy anymore. No inflections in his voice. All the characters sound the same.

The performer's microphone was not calibrated properly. The recording had a reverb/faint echo sound to it... not a clear recording. The recording quality was distracting.

What could have been

Reader is difficult to understand and enunciation is way off. Story has holes in the plot you could drive a truck through. I would have enjoyed it more if it were not for the poor enunciation

Good story - but hard to listen to

This was hard to actually listen to, the pronunciation of the speaker left a lot to be desired, for example to Knife used by the military is not a K A B A R - it is pronounced K-Bar - all one word - the Sumerian - is not pronounced like the word submarine - it took me some time to work out what he was saying!!

This is a good story but unfortunately for me spoiled by a west country narration. I come from Somerset and it's a great place, not an accent that does well with the general population, sorry.

story line good and i might but the next one if pushed, or new narrator.

How do I switch this book.

Terrible narration. Just can't get passed it. The story just rattling in my head. I recommend giving this a miss.