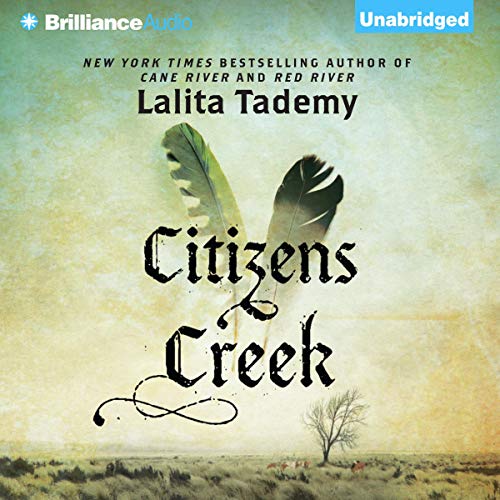 The New York Times best-selling author of the Oprah Book Club Pick Cane River brings us the evocative story of a once-enslaved man who buys his freedom after serving as a translator during the American Indian Wars, and his granddaughter, who sustains his legacy of courage.

Cow Tom, born into slavery in Alabama in 1810 and sold to a Creek Indian chief before his 10th birthday, possessed an extraordinary gift: the ability to master languages. As the new country developed westward, and Indians, settlers, and blacks came into constant contact, Cow Tom became a key translator for his Creek master and was hired out to US military generals. His talent earned him money - but would it also grant him freedom? And what would become of him and his family in the aftermath of the Civil War and the Indian Removal westward?

Cow Tom's legacy lives on - especially in the courageous spirit of his granddaughter Rose. She rises to leadership of the family as they struggle against political and societal hostility intent on keeping blacks and Indians oppressed. But through it all, her grandfather's indelible mark of courage inspires her - in mind, in spirit, and in a family legacy that never dies.

Written in two parts portraying the parallel lives of Cow Tom and Rose, Citizens Creek is a beautifully rendered novel that takes the listener deep into a little known chapter of American history. It is a breathtaking tale of identity, community, family - and above all, the power of an individual's will to make a difference.

"JD Jackson, telling Tom's story, and Bahni Turpin, relating Rose's, both deliver exquisite performances that immerse the listener in the characters. Jackson's careful diction adds emotional power to his portrayal of Cow Tom. Turpin paces Rose's story in a way that highlights the struggles and triumphs of an amazing, resilient family." ( AudioFile)

What listeners say about Citizens Creek

If you could sum up Citizens Creek in three words, what would they be?

What other book might you compare Citizens Creek to and why?

I have read all three of Latilda Tademy's novels and recommend each highly. They are a unique offering in the sense that the author researched her family and the characters are based on real people who survived and thrived through slavery and Jim Crow America.

So, no comparison comes to mind.

What about Bahni Turpin and J. D. Jackson ’s performance did you like?

Both did an excellent job of portraying Cow Tom and his granddaughter.

Found it difficult to stop listening. The histories are too long for one sitting. Too much to digest -- too much territory covered.

Citizens Creek is Tademy's third novel. She spends up to three years researching the period, her subjects, their dialect, customs. The characters of Citizens Creek are real people who lived during slavery and in the period leading up to the Civil War, Emancipation, and the early 1900s. The novel begins with Cow Tom, born a slave in 1810, owned previously by a Southern Plantation owner, and then the Creek nation, separated from his mother at a young age. He ultimately "bought" his freedom and emerged as the first Black Chief of the Creek Nation due to his considerable leadership skills and linguistic gifts. His mother advised he was special and would do great things; he in turned said as much to his granddaughter Rose. They were both propelled to live up to their legacies.

I found this a beautifully told, fascinating story. I was introduced to an episode of American History I knew little about -- that Indian tribes owned slaves, the horror of the treatment of the Indians at the hand of the US military and government, the very tough lives they and their slaves endured.

Not as good as I thought it would be

I love Lalita Tademy's previous novels. This one however was long and drawn out. There were little tiny sparks of hope when the story would pick up the pace and then it would turn back into same song different verse times 100. 15 hours honestly felt like 1,000 with this one.

I loved Cane River this was such a disappointment

the story was a very boring the names were very weird I couldn't even get into it I've tried four or five times and it is literally the worst book I've ever listened to very disappointing because I know this author can write much better than this. Cane River is one of the best books ever written and this one's clear at the other end of the spectrum

One of the most beautiful books I've ever read

I love historical fiction and Lalita Tademy truly is a master of her art. It's beautifully written and she created characters that I wanted to meet and spend time with....all of them. It's a wonderful vehicle for telling a bit of this period in history.

It was a very deep and informative book.

Yes, this book met my expectations. I knew little of the complexity of the Black and Indian struggle. don’t think the writing style took anything away from Lalita Tademy made Cow Tom’s story have the weight needed to explain the beginnings and the desire to strive ahead and succeed against all odds. The fact that he knew so many languages and was such a caring person brought value to me. Lalita really had me at the edge of my chair after Rose’s story began, maybe because I like history from a woman’s perspective – the book really came alive in Part 2 and 3.

The stories of Cow Tom and Rose taught me a lot about Creek owned slaves and Freedman Creeks. I also learned a lot about the treatment of many of the Native American nations/tribes by the US government and the treatment of black Native Americans by their fellow tribe members. However, I was not a fan of the writing. Much of the book was very boring. The author researched the story fully but did not do such a thorough job with crafting the storyline.

Yeah it's a no for me dawg. NO. Just no.... Just. No. I loved her first book, Cane River. These last 2 were not for me. Ten hours in I just marked it finished and moved on. Lord knows I tried. Hope you enjoy it!

Historical fiction at its best.

I found this book to be a fascinating look at the lives of African Indians and Native Americans during the 1800’s. The arrogance of the American government and its military representatives as they sought to take the land from the tribes who had lived there for generations is appalling. Ms. Tademy presents a history lesson that I never heard in school. Yet her focus is on the strength of character of the man Cow Tom and his descendants as they face and overcome severe disruptions in their lives. I thank the author for her work to reveal this amazing family and their story. They will stay with me for a long time.

Another wonderful part our our history restored.

Another wonderful part of our history brilliantly told, restored and shared. Thank you Lalita Tademy.