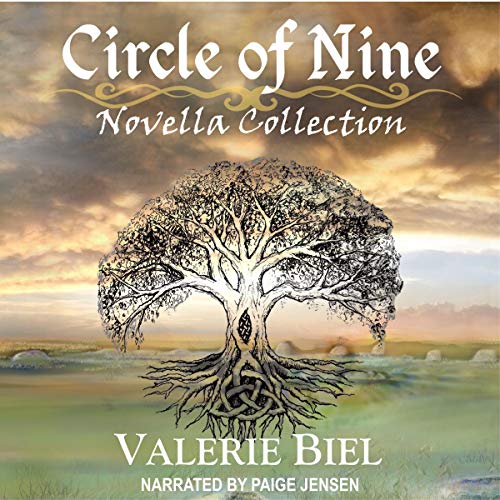 By: Valerie Biel
Narrated by: Paige Jensen
Try for $0.00

Return to the Celtic magic that began with the suspenseful, award-winning novel Circle of Nine: Beltany.

Descended from a legendary Celtic tribe that guards the secrets of the ancient stone circles, the Quinn women have a great responsibility to protect their pagan rituals and way of life. As members of the formidable Circle of Nine, they celebrate the holidays of the year from Yule to Samhain, keeping the traditions of the Tuatha de Danann alive through the centuries against insurmountable odds. We first met these women in Circle of Nine - Beltany, and now, a set of three novellas reveals more of their engaging stories.

In Bressa’s Banishment, the power struggle between Father Banan and village healer Bressa Gormley unfolds amidst accusations of treachery, heresy, and murder. Can the Circle protect their trusted healer and the path of the Tuatha against a growing religious fervor?

Dervla’s Destiny brings us to medieval Ireland where the beloved character Dervla Quinn learns of her gifts and fights tremendous loss, betrayal, and violence, all the while never giving up on finding the love she deserves.

In Phoebe's Mission, when an evil force on a quest for ultimate power threatens the Circle of Nine, Phoebe Quinn must leave Ireland for the first time and travel to the United States to protect their way of life. Along the way, she meets the handsome Macklin Scott, taking her mission - and possibly her future - on a far different course than expected.

What listeners say about Circle of Nine: Novella Collection

I absolutely loved this book!I actually started it on St Brighids Day,so it was timely.I think I love Dervla best.Besides her name,sh has been through SO much to get where she finds a home. Paige Jensen is a terrific narrator.I was given this free review copy audiobook at my request and have voluntarily left this review.'

Go and travel back in time!

My second book in the series Circle of Nine. After I read the first book: Beltany, I couldn't wait for the next book to arrive on Audible. And honestly, I was not disappointed! The first book was a parallel of few stories - the main one that of Brigit Quinn, and others as Brigit was reading about the other characters- her ancestors. In the second book: Novella Collection, Valerie Biel gave us deeper insight into the world of Circle of Nine. She went into detail about Bressa, Dervla and another character Phoebe. I couldn't stop listening and I didn't want the stories to end. Stories are written very well, and obviously characters built really well too.
The narrator Paige Jensen - I am so glad that she got to narrate the second book as well. I love her Scottish accent and her ability to switch between characters so effortlessly male and female; old and young. One feedback for Paige would be to have different characteristics for male voices. All the male voices sound very much the same... but honestly that's minor. I hope that she continues to narrate others as well.
Lastly- Jamie Fraser/Outlander fans- this book is for you! Jamie Fraser must have been Liam in his past life. That's all I will say about this.
Love... love... love this series.