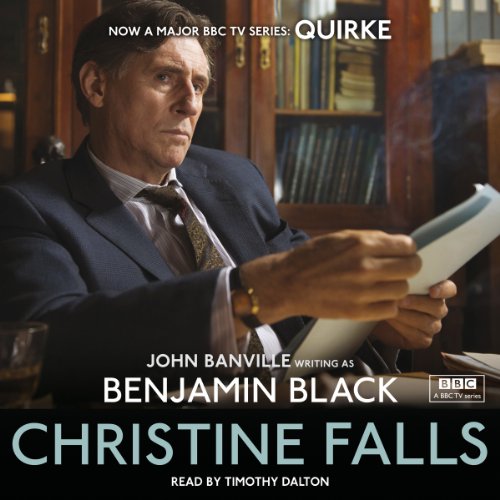 By: Benjamin Black
Narrated by: Timothy Dalton
Try for $0.00

Quirke's pathology department, set deep beneath the city, is his own gloomy realm: always quiet, always night, and always under his control. Until late one evening after a party he stumbles across a body that should not be there - and his brother-in-law falsifying the corpse's cause of death.

This is the first time Quirke has encountered Christine Falls, but the investigation he decides to lead into the way she lived and died uncovers a dark secret at the heart of Dublin's high Catholic network; one with the power to shake his own family and everything he holds dear.

"A superb stylist . . . His control and pacing cannot be faulted, and the final outcome is almost unbearably moving . . .You're in for a treat." ( Michael Dibdin, Guardian)
"Succeeds sensationally . . . An absorbing plot, beguiling characters and evocative settings . . . His pacing is impeccable." ( Marcel Berlins, The Times)

What listeners say about Christine Falls

I was looking for an audibook narrated by Timothy Dalton and I didn't care what is it about. English isn't my native language, but I enjoyed it very much. I looking forward to next part. Timothy Dalton performed it really great.

What disappointed you about Christine Falls?

What was most disappointing about Benjamin Black’s story?

timothy dalton although the story is slow

a better reader that could bring characters to life

What character would you cut from Christine Falls?

didn,t get that far

Where does Christine Falls rank among all the audiobooks you’ve listened to so far?

First audible book ever downloaded so difficult to compare.

Enough suspense to keep listening in one breath

Mr. Dalton's voice was the main reason for choosing the book. I think the narrator has a great voice and I was not deceived. And much better listening to Dalton's reading a good book than watching him perform well in some crappy B films scrips. What I particularly like is the depth and range of tone, compared to some of the samples of other narrators I am listening to now which are by comparison so flat.

The changing relation between father and daughter

I only wish there were more good books narrated by Mr. Dalton

More than just a crime story

Whilst this took a while to get into it is a fascinating insight into guilt, lust, greed, love and the fear of the final retribution. If you like more than who done and enjoy why done it you will love this. The historical background plays well and reminds you how far we have come. Not yet perfect I agree but makes one less inclined to moan about the lot of women and children who fall out of a well rounded nuclear family. After this book keeping family secrets will seem an even more perilous idea.

Having been brought up in convent the facts and the thinking behind those facts rang true. Take time for this thought provoking audio book. However, beware you have at least empathy if not sympathy for even the most un-likeable of this strong cast of seeming saints and apparent villains, who make you take a second look in the mirror.

Although recently listed as one of '50 Thriller Writers to Read Before You Die' , this will disappoint any reader looking for the traditional puzzling tale littered with bodies. Instead it is a pacy, intricate and well-plotted novel with excellent characterisation. Set in 1950s Dublin, it has in its main character, the flawed pathologist Quirke, who is inextricably linked with the main characters (and suspects) through marriage. The beautifully crafted writing is only what one would expect from a writer who, as John Banville is a previous Booker winner with 'The Sea'. Perhaps the greatest testimony to its success is that many readers other than me will be heartily relieved to know that a sequel, 'The Silver Swan' is also available on Audible.

a dark story with brilliant writing

Don't expect the run-of-the-mill suspense novel here. The writing is of a literary style, dark and evocative. It somehow reminds one of Joyce's The Dead. Catholic Ireland of the 1950s is presented in all its harshness and without compromise. The plot is simple enough but engaging and coherent from start to finish, with different perspectives introduced that add dimension to the story. The main character is larger than life, and the many other characters each carry plenty of weight to make them remarkable. A very good read, albeit not for the light-hearted.

Readers who witnessed or experienced the oppression of the Irish Catholic church during their childhood will no doubt feel that this story strikes a particular chord. There is a bitterness throughout that can only be evoked by someone who has experienced first-hand the control over society that the clergy of the period exercised.

Finally, the narrator is excellent (I presume it's the Timothy Dalton of James Bond fame), a little fast at first but perfect for the job.

Despite all the Oedipal red herrings, this is a book about unintended consequences or as Wilde probably said “No good deed goes unpunished “.

Dark and a little hard going

I'd not seen the series and came to this book fresh. I enjoyed it, but it's sense of time extended to feeling that the writing style was dated as well. I was quite surprised to discover when it was written. In many that's a plus - it creates a strong feeling of place and time.

But on the upside, it's hard going and full of the prejudices of the time. Also, and this is just a personal thing, I feel I've read a little too much in literature recently about the Irish Church doing despicable things to women who fall and have illegitimate children.

That said, it's beautifully written. And the dirge like narration perfectly suits the dark character of Quirke.

I just can't be doing with JB what ever

If you could play editor, what scene or scenes would you have cut from Christine Falls?

Too hard a knot.

JB is sadly yet another example of a writer in love with the idea of being a writer. The result is invariably the same, self-conscious, laboured and lifeless narrative - no matter how styled, finally empty. A boring journey to to empty destination. Souless.. Best avoided.

A message for Timothy Dalton : I find his reading very good BUT Timothy Dalton should have a word with Sean Barret about the Dublin accent he (Timothy) uses and the way he pronounces some names and placenames. In general his accent is pretty good so the anomalies (the pub Doheny & Nesbitts is pronounced DOUGH NEE & NEZBITS for instance - the 'HE' part in Doheny is 'silent'...) stand out even more than they would otherwise...

...with my childhood experiences of convent, church and powerful men. I felt again the cold distain, the silent pain and all the rest. Brilliantly performed by Timothy Dalton. I loved the ending.

Timothy Dalton needs a medal for enduring the narration of this audio book. He did an excellent job with one of the most depressing stories I have ever heard. I did not dare to return it as I had returned my last book, so I gave it a chance to redeem itself and kept going, skipping the odd chapter as it was not too difficult to assume what had transpired in the interim. Sadly the story was beyond redeeming. Well done Timothy Dalton, beautifully read. Wonderful modulated voice. Will never read another book from this author and I have over 100 audio books in my library, so I am not a novice and do not criticise lightly.

absolutely fantastic. beautifully written, complex characters, narrator sensational. highly recommend. a high bar has been set and can't wait to see if the rest of the trilogy can maintain that energy.