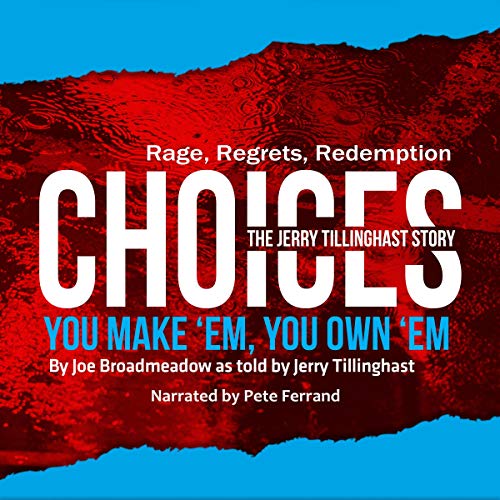 Choices: You Make 'Em You Own 'Em: The Jerry Tillinghast Story

By: Joe Broadmeadow,Jerry Tillinghast
Narrated by: Pete Ferrand
Try for $0.00

In a remarkably personal and intimate story, Jerry Tillinghast talks about his life and the choices he made. Jerry discusses battling alongside his brothers on the streets of Providence, enlisting in the United States Marine Corps, fighting in Vietnam and becoming a victim of the politics of that war, returning to Providence as an angry young man, and his choice to hang with the wise guys.

Jerry speaks of the cost of his reputation as a "feared mob enforcer" and the effect it had on his family, meeting Raymond L.S. Patriarca - the notorious head of New England Organized Crime family, and how he came to embrace him as a father figure.

He reveals the inside story of the two of the most infamous cases in Rhode Island history, Bonded Vault and the George Basmajian Homicide.

Jerry was found not guilty after the Bonded Vault trial, but his luck ran out with the Basmajian murder. Convicted with Jerry was his brother Harold Tillinghast. Since the moment of their arrest, Jerry has said just one thing: "Harold wasn't in the car."

Jerry Tillinghast, a featured character on the Crimetown podcast, one of the most downloaded podcasts in the world, tells his life story with honesty and emotion. Setting the record straight after 40 years of silence.

What listeners say about Choices: You Make 'Em You Own 'Em: The Jerry Tillinghast Story

Rhode Island as I knew it,when I was kid.

I'm from Rhode island and I know who almost all these characters are. I had no idea Jerry T. was so complex,and lived by such a code. Fabulous read. Steve P