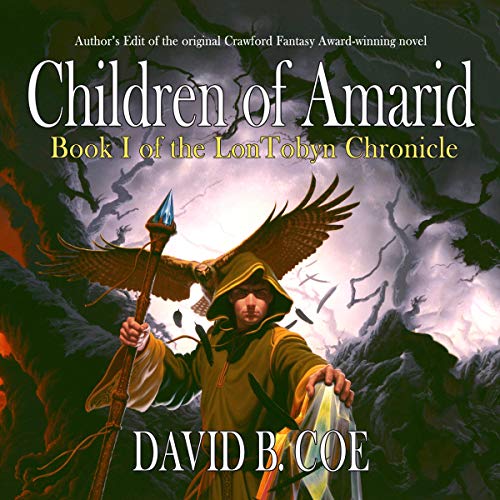 For a millennium, the Children of Amarid have served the people of Tobyn-Ser. Drawing upon the Mage-Craft, which flows from the psychic bond they forge with their avian familiars, the Mages of the Order have fulfilled their oaths by healing the injured and ill, repelling invasions by the land's enemies, and caring for the people in times of crisis. They are governed by laws handed down by Amarid, the first of their kind, who committed the Mage-Craft to the people's protection. Only once in a thousand years has a mage defied those laws. Theron, a contemporary of Amarid, sought to use his powers to gain wealth and glory. For that, he was punished, although not before he brought down a terrible curse on his fellow mages and all who would come after them.

Recently, dark rumors have spread across Tobyn-Ser. Children of Amarid have been seen destroying crops, vandalizing homes, massacring men, women, and children. Have the mages forsaken their oaths? Has Theron returned from beyond death to take his vengeance? Or does Tobyn-Ser face a new threat, one it is ill-prepared and ill-equipped to face?

With the land in turmoil and faith in the Mage-Craft badly shaken, it falls to Jaryd, a young mage with extraordinary potential but little knowledge of the power he wields, to find and destroy Tobyn-Ser's enemies before they destroy all he holds dear.

Children of Amarid is the first volume of the LonTobyn Chronicle, David B. Coe's Crawford Award-winning debut series.

What listeners say about Children of Amarid

So happy that this book was made into an audiobook

great narrator for a story that I have loved for years. buying the whole series.

I adore this series!!

I have loved this series for awhile and this Narrator does such a great job!!

I think this is the start of a great series. I like the group of strong characters. The detail of the story is welcome.

A retelling of the early years of the Japanese invading the Philippine Islands, only it's magic with powers without too many tricks in their baskets, Vs a sophisticated Raiders; the gorilla measures defend their land against a superior force from outside.
it's local skills against technology, may the good guy Gorillaz win.
what this story May lack in action it will makes up for by good wordsmith ING. I've listened to this one twice just to hear the flow of words, it's surprising how much of the tale I missed in the first listening.

At one time I was reading and listening at the same. I do not know if the narrator were the same book as I were. That's why I gave it low rating.

I read this series years ago, and was really pleased when I saw that this book was available from Audible. I was a little dubious about the narrator at first, but he sort of got into the spirit of the story and did a reasonable job. I really, really hope that Audible are planning to release the other two books in this series, as it would be a real shame if this wonderful story was left only partly told