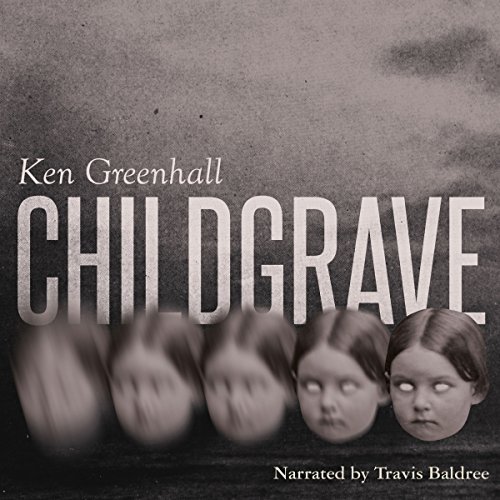 By: Ken Greenhall
Narrated by: Travis Baldree
Try for $0.00

When photographer Jonathan Brewster’s four-year-old daughter, Joanne, tells him about her new invisible friends, he doesn’t think too much about it. But then he sees them for himself: weird and uncanny images of the dead appearing in his photographs. The apparitions seem to have some connection to Childgrave, a remote village in upstate New York with a deadly secret dating back three centuries. Jonathan and Joanne feel themselves oddly drawn to Childgrave, but will they survive the horrors that await them there?

The third novel by Ken Greenhall (1928-2014), whose works are receiving renewed attention as neglected classics of modern horror, Childgrave (1982) is a slow-burn chiller that ranks among Greenhall’s best.

“Writing in Shirley Jackson’s precise, sharp, chilly prose, Greenhall delivers a slippery book that can’t be pinned down, all about spectral photography, little dead girls, snowbound small towns, and the disquieting proposition that maybe God is not civilized.” - Grady Hendrix, author of Paperbacks from Hell

What listeners say about Childgrave

What did you love best about Childgrave?

It's always fun to discover an overlooked author. Greenhall had the misfortune to write some very thoughtful and scary books that ended up wrapped in lurid dust jackets that made them look like every other mediocre bargain-basement paperback horror trash from the late 70s/early 80s. However, one quickly realizes that this is subtle, quality prose with strong characters and an intriguing plot. I liked the fact that the story unfolds slowly and that the protagonist and minor characters where interesting in their own right and not just one-dimensional props who propel the story forward without contributing anything

What was one of the most memorable moments of Childgrave?

Lots of really crazy moments come towards the middle/end, but to avoid spoilers, I will say any of early interactions the protagonist has with the mysterious Laura, as these passages evoke a subtle yet uncanny dreamy quality that lays a great foundation for what is to come

Again, too many spoilers. There are multiple scenes early on that do a great job establishing mood and setting the stage. I also enjoyed the scene where the Sicilian Opera singer is being photographed, for sheer oddness.

Who was the most memorable character of Childgrave and why?

I enjoyed spending time with the protagonist, even thought there were many things about it I disliked, he felt like a fully realized charecter which is refreshing. I also enjoyed Mr. Bordeaux, but mostly as comic relief and a source of witty banter.

I really hope Audible makes more works by Greenhall available soon. I would love to listen to more of his books and ideally see a renaissance in interest around him. Travis Baldree was also an excellent narrator, so hopefully he will continue in that capacity if more of Greenhall's works find their way to audio.

I need more synonyms for *creepy*

Would you listen to Childgrave again? Why?

The story follows main character Jonathan, a photographer, widower, and father to Joanne, one of the creepiest little girls in fiction. Jonathan is pretty creepy himself. He becomes obsessed with a harpist named Sara. Although he describes her as beautiful, she remains somewhat plain in appearance while still having a profound power over the photographer who desperately wants to photograph her. He continually calls her beautiful but our narrator has a way of making somewhat grand statements that sound more like he is trying to convince himself more than trying to convince the reader. I go back and forth not trusting him and also thinking that he is a misogynistic pig. He’s probably both. Alas, the book was written in another time, to which I am grateful because the pace is perfection. It is slow but I write that not in a negative light. It reads like moving through an old haunted house: a great deal of anticipation with eerie scenes throughout.

To add to the eeriness, the daughter Joanne has an imaginary friend, whom readers will learn is not so imaginary and not so alive anymore. This really isn’t a spoiler if you read the description of the book. Even without discussing this friend, Joanne makes uncanny statements about hoping she has another birthday and wondering if her father will miss her when she dies.

When Jonathan cuts his finger and begins to bleed, Sara licks the blood. He laughs commenting about vampires and Sara’s response is a bit eerie. It would be too easy for her to actually be a vampire, right? Intending for readers to view her as mysterious, her character comes across more like an abandoned exoskeleton. Is there any substance under that shell? She would be the first to note that she does not know what Jonathan sees in her. As a reader, I'm not sure either. And pseudo spoiler alert: when Sara finally stops being coy and Jonathan is allowed into her bedroom, their first sexual encounter is, err, sensually odd. Sorry, I cannot come up with a better description. That scene is going to stay with me like the sex scene in Katherine Dunn’s Geek Love that references a squashed cockroach. Alright, it may be just a wee bit less impactful that Dunn’s.

The book reads as if Greenhall had two great ideas for a novel but only had one book deal so he just wove them together. Somehow it works. It resembles a Victorian ghost story and an M. Night Shyamalan film. To write any more would give it away.

I was engaged almost to the last page even though much of the time included being puzzled over the characters’ choices. Nevertheless, it was a great read and I recommend it if you have not picked it up.

The first half of this book barely resembles horror at all, and for the first few hours I was wondering where it was going. Our narrator, Jonathan, is a fussy fine art photographer living a comfortable upper middle class Manhattan life with his four year old daughter, Joanne. We start to think that maybe Jonathan is something of an unreliable narrator when he begins to obsess over a beautiful harpist, Sara Coleridge, whose mere existence completely turns his own existence upside down. Not long after she makes her way into his family's life, his daughter starts seeing creepy imaginary friends, ghosts and angels start popping up in his photography work, and everything seems to be tied to a strange middle of nowhere New York town that has survived without electricity or telephones since colonial days.

This may sound like a bunch of horror tropes strung together, but Greenhall is a fantastic writer and the story goes in a direction that is both unexpected and extremely unsettling. We eventually find out exactly how much Jonathan is willing to sacrifice for Sara's love, which is something that most people would find to be horrifying and unthinkable.

For a few reasons, I can't say that this is as good as the other Greenhall book I've read, Hellhound, which I consider to be something of a masterpiece. As good of a writer as he was, he doesn't quite avoid the one thing that drives me crazy about a lot of horror fiction. Some of the reactions of characters to the goings-on in this book are just completely unrealistic and baffling! Why is almost no one as horrified as they should be by the ghosts in the pictures? Why don't Jonathan's friends and associates make more of an effort to stop him from going to Childgrave once they figure out what may be happening there? This doesn't really detract from the story, but it also doesn't go unnoticed.

Horror was an extremely popular genre when this book was published (early 80s), and horror paperbacks were selling so well that many hack writers jumped in the game to make a quick buck off of a genre that is ostensibly easier to write than most others. On the other hand, the genre was also filled with authors like Greenhall, outstanding writers who were probably never truly given a fair shake by critics because they happened to write horror. He was extremely underrated in his day, but fortunately he seems to be getting the rediscovery treatment, thanks to Valancourt and also writers/bloggers like Grady Hendrix and Will Erickson who have championed his work.

This one isn't quite as good as the other Greenhall I've read, Hellhound, which I consider to be something of a masterpiece. Having said that, it's still an extremely creepy and disturbing tale that fans of quiet horror will really appreciate. Travis Baldtree does an excellent job here, with a delivery that really nails the narrator's character of a square upper class guy ("I admire the person who refuses the second drink") whose life descends into madness, so this audiobook is highly recommended.

Childgrave gave me a serious case of the creeps, and I don't creep easily!
It's an old-school, slow-burn creepfest, and I thought it was very entertaining.

It's the kind of horror that creeps up on you...

Beautifully written by Ken Greenhall.
Travis Baldress gave an excellent narration, and I really enjoyed the listen.
Wanna go there? Think you can handle it? :)

slow story, drawn out and not scary. good speaker

So much promise... ultimately disappointed

Initially, the book is slow.... but then gets creepy... really creepy... then just sick and unbelievable. I am not going to return it because I guess on some level I was interested enough to see what happened.... but wish I would have just stopped and returned it in hindsight. I am pretty bummed.

The absolute worst audible book I have ever listened to...but, I did indeed listen to the entire book. I kept waiting for some wonderful mystery or surprise to this weird story involving questionable parent skills and creepy daughter conversations...was it going to be a ghost story(?)...was it some time travel love story(?)....historical serial killer tale...etc...nothing.

If I felt there had been any sort of real story line at all...well, at least I would have felt I had suffered knowing I didn't like that genre of book. I guess I kept listening because I never have read/listened to a book that went absolutely no where. The un-natural parent/child relationship...well that's an entire review in itself.

Not scary, no love story, no mystery, no historical serial killer...save your credit.

Well it just proves that you can't judge a book by reviews...
Absolutely awful.
Pathetic protagonist that bordered on creepy stalker.
Daughter, aged 5 confuses the reader as the author writes as if she is a teenager.
uncomfortable over sexualising of the two little girls, no one wants to hear this.
Long, drawn out story that could have been written on a postcard.
Not happy.
Didn't get to the end, in actual fact, I slept through it and couldn't be bothered to find out what happens.