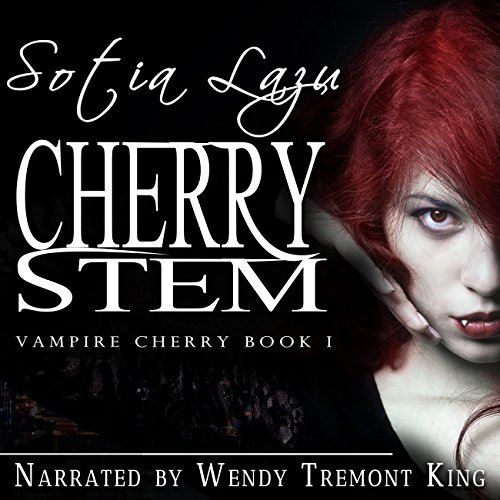 By: Sotia Lazu
Narrated by: Wendy Tremont King
Try for $0.00

Turned at the cusp of a promising career in the adult movie industry, Cherry Stem has to rely on her mesmerizing vampire gaze for her meals and money. With the rent deadline approaching, settling for pocket change isn't an option, so she reluctantly lets tall, dark, and handsome Detective Alex Marsden take her home for the night and fulfill her needs.

Only she gets more than she bargained for.

When Cherry meets Alex, she expects him to be nothing more than another "girl meets boy, girl feeds from boy, girl erases boy's memories" hook-up. Once missing young women, the vampire council, and her irresistible ex are thrown into the mix though, she realizes nothing is as simple or random as she thought it was.

And her unlife isn't the only thing at stake.

What listeners say about Cherry Stem

What made the experience of listening to Cherry Stem the most enjoyable?

"I was provided this audiobook at no charge by the author, publisher and/or narrator in exchange for an unbiased review via AudiobookBlast dot com" I really enjoyed this book. It was fast pace, interesting. Had a great storyline with twist. I would recommend this book/series. I look forward to the 2nd book

Alex. He was brave and accepting to a new world

Have you listened to any of Wendy Tremont King’s other performances before? How does this one compare?

No. But she is a great narrator.

This book was funny especially the interaction with Constantine.

can't wait to start the next book

Where does Cherry Stem rank among all the audiobooks you’ve listened to so far?

This one is pretty good. I love that it is a series because I can't get enough of Cherries crazy world.

What was one of the most memorable moments of Cherry Stem?

Which character – as performed by Wendy Tremont King – was your favorite?

Cherry of course. Wendy King is a very talented narrator so when I had a chance to listen to something new and different that she had narrated I jumped on it. She has this way of bringing that funny smarty mouth to life in Cherry Stem.

A day in the life of Cherry Stem.

I received this audio book in exchange for a review.

Would you listen to Cherry Stem again? Why?

Absolutely...this is a great book!

When Alex thinks she is a hooker at the beginning....I totally cracked up laughing!!

When Cherry finds Alex near the end...

OMG THIS WAS FABULOUS!!! I love a good vamp series and I have definitely found one!!!

Cherry is a newly turned vamp of 6yrs...and she kind of hangs out at bars and nightclubs to feed and we will say get some male attention...lol She then wipes there mind and they just think they had a sexy night! She is out one night and meets Alex...he is a cop and she is super attracted to him...she goes home with him and after a case of mistaken identity..lol They have a great night together, Cherry accidentally falls asleep, and then almost gets fried by the sun..lol She has A LOT of explaining to do after this....Well Alex has been on a case where young women are disappearing and Cherry just so happens to be part of that without her knowledge..and it all takes off from there...This book also has quite a bit of sexy time...SO ENJOY!!!

I was attracted to this book not because it is about vampires (I never got into vampire fiction), but because it sounded like a good mystery. I wasn’t disappointed, either. The mystery is very nicely constructed, and the characters, vampire and human, are well drawn and fairly believable. This book won’t lure me into reading more vampire fiction, but it was an enjoyable read.

The performance of the narrator was professional in all respects.

Where does Cherry Stem rank among all the audiobooks you’ve listened to so far?

Cherry Stem is a refreshing addition to the PNR genre. I am highly anticipating more from author Sotia Lazu and the narrator Wendy Tremont King.

What about Wendy Tremont King’s performance did you like?

Wendy Tremont King does an excellent job with the different voices for the various characters and she's also extremely talented at infusing the proper emotion into a moment without overdoing it.

I received a free copy of this book in exchange for an honest review.
Fans of paranormal romance will absolutely enjoy this series. It's a must read.

What about Wendy Tremont King’s performance did you like?

Wendy Tremont King, the narrator, was enjoyable to listen to. I feel like I've heard her voice before, but can't place it. She brought the story to life well, and held my attention. I'm glad I was able to experience a new to me narrator, and I can't wait to get book two on audiobook.

I have to admit, Cherry Stem was even better than I expected. I entered the book thinking the main character was going to be a flashy woman I wouldn't be able to connect with. She's a model turned adult movie star that was turned into a vampire. I figured the book would focus on that, but it didn't really. It opens with those details and Cherry going out and hitting the bar scene so she can get her next meal. Little did she know that her undead life would be changed that night. She meets a hunky police officer, Alex Marsden, and they wind up going back to his house. Things were going great, until the morning rolled around and all of a sudden we're getting BBQ'ed Cherry. Talk about not a pleasant way to wake up. That pretty much sealed the deal that Alex finds out about Cherry being a vampire.

This is where it gets interesting. The duo continues with their relationship and a vampire winds up threatening Alex to stop looking into a case. Forced to enlist Cherry's old flame for help, they all have to figure out who is behind girls going missing and some other nasty deeds before it's too late. The mystery element was nice, I wasn't able to figure out the whodunit before that part of the story unfolded. That's always a plus in my book, especially when it's not a person out of left field. The characters were solid, I enjoyed Cherry's character the most. She has a bit of spunk that kept me entertained. I really enjoyed Cherry Stem and can't wait to read book two. I suggest this if you're looking for an Urban Fantasy vampire book.

a trips down imagination road review

Would you listen to Cherry Stem again? Why?

The characterizations not just from the author but also from the narrator.

Any scene where Cherry proved that she wasn't just something to look at!

No, but only because I can't listen in one sitting, I didn't want to stop listening at some points though!

Cherry was at the beginning of a promising career in the adult video industry when she was turned into a vampire. Having learnt to cope on her own, she meets Alex, a police officer in charge of finding missing girls in her city. Instantly drawn to him, the more she talks to him the more she likes him, but when the mystery involves him she steps it up.

Cherry Stem was one of those books that I really wanted to read, then started to read, wasn't too sure about, then ended up really enjoying. It was a complex relationship, and I'm not all that too sure how much of that was to do with the fact that it was an audiobook or not.

Wendy Tremont King was brilliant as a narrator. Not only did she have a wide variety of voices that suited each individual character and helped to round them out both personality and physically, but she also added emotion behind Cherry's thoughts that not all narrators would have done. Saying that this is the first person narrative book that I've listened to as opposed to read, so it could be that.

There were some particularly hot scenes between Alex and Cherry, and the chemistry between them was well played out by both the author and the narrator. It was easy to see that they worked well together both intellectually and physically.

Vampires were approaching the traditional in Cherry Stem, they couldn't go out in the sunlight and were quite difficult (but not impossible to kill). I did like the way that vampire politics came into it, and the way that the author introduced the idea of having a 'well known' or recognisable person turned.

The mystery became clearer and clearer as the book went on , and I liked how it unravelled in front of me (or into my ears). Because Alex was a detective it worked well as he was able to put pieces together, even more so when Cherry added vampire knowledge!

Name does not say it all!

What was one of the most memorable moments of Cherry Stem?

I was surprised by the ending and cannot wait for the next book!

Have you listened to any of Wendy Tremont King’s other performances before? How does this one compare?

Yes, I have listed to Wendy Tremont King's other performances and she is now one of my favorite narrators. I actually search her name to find what else she has narrated. The genre is different for her but I like her ability to diversify.

When Cherry was emotional so was I!

This is book 1 in Lazu's Vampire Cherry series and what a ride this is! This read has everything. Romance, steamy chemistry, mystery, action, twists and turns, betrayal and more! I love how fiery Cherry is. She thinks and pretends to be so tough but in reality she cares so deeply. Alex is the sweetest with the perfect balance of protective and jealousy. I just loved it...thank goodness for the epilogue but I need to know what will happen next!

I received a free copy of this book at my request and I provided this voluntary review.

I enjoyed reading this book. It was exciting and had action and vampire love. The good against the bad.