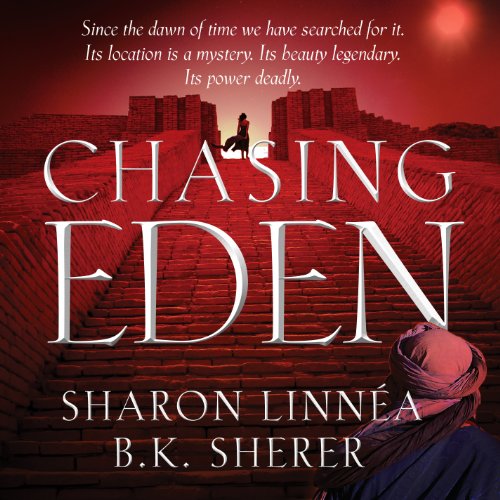 April 8, 2003: U.S. Army Chaplain Jaime Richards is stunned when her civilian friend Adara Dunbar staggers, mortally wounded, out of the Iraqi night, with an urgent "package" for Jaime to drop at ruins of the ancient city of Ur, now inside a U.S. military base. Jaime is soon pulled into a web of 5,000-year-old secrets as she joins forces with Adara's mysterious brother on a quest through Ur, Babylon, Baghdad, and Iraq's southern swamps to save a hidden treasure that powerful men are willing to steal and kill - and start a war - to find. Smart and suspenseful, a hold-on-to-your-seat race to find the site of the original Garden of Eden.

What listeners say about Chasing Eden

Rambling story but lack plot! Narrator saved the day! Not a good story!
Loved the narrator!

I have read all the books and wanted to listen to them. I still think they’re great!

I’m so hooked on the series! I started listening to it while I was doing an overseas military move so I had lots of time to listen while I packed stuff up. I only listen to nonfiction so I was pleasantly surprised when I became easily engrossed in this historic military fantasy thriller. The story is even historically accurate with battles from Iraq. There’s a little romance, a little religion, lots of thrills and easy to follow for everyone. I’ll be getting the other bucks. Enjoy!

This story was wonderfully written. It is so well rounded with realistic fiction elements. As a reader, I could visualize the events and the places they took place. I loved this book. I loved the journey through the Middle East during the time of conflict. Excellent read.

Interesting spin on the Elites and the War in the Middle East. I can see how this could be a high plausibility on why we are over seas. Well, all except the end. The beginning of this book sounded extremely computerized to me, but towards the middle sounded a lot better. I will definitely be listening to the second book in this series.

Summary: Major Jaime Richards, an army chaplain, gets caught up in a giant conspiracy with world-altering consequences on the eve of Saddam Hussein’s fall in Iraq.

Additional Comments:
- Characters (3/5) – Jaime’s likable but not realistic in any sense. She doesn’t think, speak, or act anything like I’d expect a chaplain to … except in maybe 2 scenes. There’s maybe three prayers in the whole book and they seem bland. We don’t know much about Jamie’s family. I think that’s by design. Does she have just a brother or a brother and a sister? Yani’s mysterious. I get that. There are reasons for the mystery man. There are very few sections by random army personnel. They’re good but too few to know the character.
- Aside: The main character might be a chaplain but it’s not a very Christian-y book. That might thrill people, but it makes her unrealistic. (The cynical part of me says that perhaps she’s “too realistic” in terms of what the church has become in America, very politically correct.) If you’re looking for something marked Christian Fiction, look elsewhere. If you’re just in it for general thriller with fantasy-ish elements, go for it.
- Plot (2/5) – Scattered is the best term I can come up with. It’s definitely fast-paced much of the time, but the pacing’s also slightly awkward. It’ll be full-speed action sequence (well-described) then *boom* history lesson. I have several misgivings about coincidences that happen. Without going into too many for fear of spoilers, let me just chat a moment about a few. The character who shows up in the beginning “stumbles out of the desert” right across Jaime’s Humvee convoy – after having been captured by some nameless bad guys and tortured for information. How did she escape? How did she know how to find Jamie? They also went to college together. Jaime’s even in the Middle East at the right time and place she needs to be to be caught in the conspiracy. She speaks the right language to be relevant to the bad guys. I understand that they’re setting up for a larger world, but the plot’s needlessly complicated. It’s like they read a book on conspiracy theories and had a shopping list to tick off for items. Must have 2-3 crazy dudes looking for ultimate weapon for world domination.
- End Sequence (4/5) – Unrealistic, but cool.
- Very End Sequence (1/5) – Intriguing in the sense that it explains a lot, but it also strikes as a blatant, “well, if you want to know the real story, you’ll just have to buy book 2” bid. That leads to lack of closure and tends to tick me off. I have a thing about needing closure to enjoy a story.
- Action (4/5) – Nicely described.
- Narration (4.5/5) – Fitting. The narrator did a nice job, and I would listen to more books from her. She has a matter-of-fact style but it comes across as informative and earnest not annoying. Her voice quality is soothing.
- Content and Language warning – Besides a few war scenes (well-described), there is also one almost rape scene. There are at least 3 f-bombs in here. I officially tap out of a book at 4, so that’s saying something. Definitely not a kid-friendly book.

Conclusion: It’s an enjoyable listening experience if you can get past the highly unrealistic points.
* I received a free copy of the audiobook. I have chosen to review it. All opinions expressed are my own.