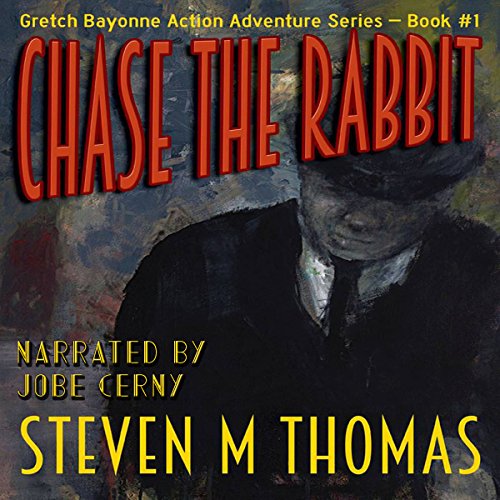 By: Steven M. Thomas
Narrated by: JoBe Cerny
Free with a 30-day trial

From the barrooms of New York City, to the movie studios of Hollywood, Steven M. Thomas has crafted a tale of intrigue that captures the early 1930s as freelance writer Gretch "Bay" Bayonne attempts to unravel the mystery of why a dedicated family man would abandon his life for no apparent reason. Along the way he encounters movies stars, Nazis, and newspaper tycoons, and barters a banana for a mysterious gold key stolen by a runaway monkey on a walkway atop the magnificent dirigible Graf Zeppelin. This first book in the Bay series is sure to grab listeners from the first words and will not let go until the last!

What listeners say about Chase the Rabbit

Suspense in the air.

From the ground to the air and to the ground again. JoBe Cerny makes this story come alive . With a very good performance of Steven M. Thomas' book Chase The Rabbit. The book is a great read. Even better on the audio side. Highly recommend this first in the series.