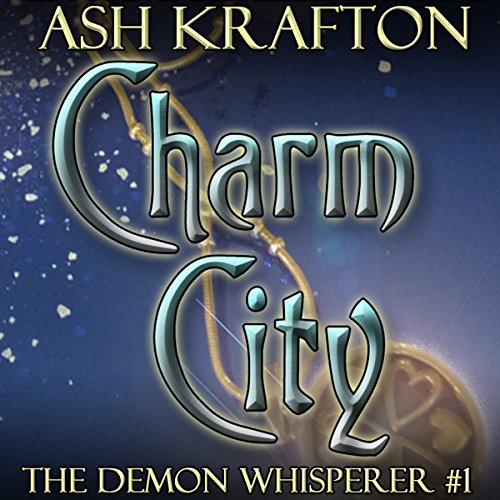 By: Ash Krafton
Narrated by: Roy McCrerey
Try for $0.00

The darkness is rising, and one man stands against it: the exorcist mage Simon Alliant. But in Baltimore, he finally meets his match...a part-mortal divinity with the power to whisper away demons.

Simon Alliant is an exorcist who battles demons, whether he wants to or not. Sometimes it's not so bad...he gets to play with magic, after all. But for Simon, magic represents a demon of another kind. He's addicted to magic, and it takes more than a handful of charms to keep that particular demon at bay.

Chiara is part Light, part Dark, and stubbornly mortal. The woman has a way with words: She literally talks demons into abandoning their human hosts. Simon thinks that's not the only trick she has up her sleeve - and that's pretty high praise coming from a mage like him.

As intriguing as that may be, Simon has too many reasons to distrust her...one of them being his more-or-less partner, an angelic Watcher. Amid all the celestial warnings of the rising dark comes a new prophesy that makes him wonder: Is Chiara a threat to him and all of mankind?

Or will she be his salvation?

What listeners say about Charm City

Definitely one of the best urban fantasies I've listened to recently. Usually they are somewhat short, which this is also, and there's not much world or character building. This was not the case here, the world is very clear and there is genuine character development. Both main characters are likable and the magic system is intriguing, with the use of magic charms and innate magic. The production is also great, with distinct voices that bring the characters to life. Can't wait for the next book!
I was given this free review copy audiobook at my request and have voluntarily left this review.

It was interesting to have two different types of magic in one book. In one case the magic is inherent and in the other it seems to rely of charms and wands etc. the differences make me wonder at the significance this will have.

This was a great start to the series, it did a great job of building the world and introducing the main characters. But it's left me with as many questions as answers setting the stage nicely for book two.

Simon is a great lead character, flawed with pain and mistakes in his past, but he's determination to live a better life now and he's very likeable because of that.

Your fundamental good versus evil story with demons and angels it also adds more and left me wanting more.

The character voices are fantastic, even the demon and angel voices seemed right. The delivery is well paced and flows naturally. The editing wasn't complete, there were still a few mistakes that weren't edited out, but these were minor.

pretty good but wish it was longer

This was a good urban fantasy/paranormal story. It has many supernatural elements like mages, angels, etc. The story itself is interesting and engaging. The author does a good job of character and world building. The narration is well done and really brought the book to life in my imagination. My only complaint is that it is a little short. All in all, though, I would definitely be open to more from this duo.

Simon is an exorcist mage that battles demons but is addicted to the magic he is given to use. Therefore he keeps charms on him to help lessen the addiction. He also is friends with a watcher an angel that’s job is to watch the human race. Simon has had good and bad but has met his match when he meets a girl who is part divinity. Loved the magic and the fact there is definitely something different with how they mention how a half divinity was able to survive. Awesome book.

I want this guy to come to my house and just read all the labels in my kitchen! I was completely pulled into the story and kept captivated. Great book!

This is a great beginning of series. I especially Iove the demon hunting & magical aspects. Simon and Chiara's relationship develops naturally - it's not instant or forced. The narrator does a wonderful job bringing the story to life. I look forward to more in this series

Chiara is a great character

This is the third book I’ve read/listened to by this author and I would listen to another. I’d like to listen to more in this series. It has quite a few original elements including Chiara’s heritage and abilities and how Simon’s magic works. I like the abilities and presence of demons and angels on earth, and how the devil is a very complex character.

This is the first book I’ve listened to by this narrator ( Roy McCrerey ). Great voice acting! He has an array of voices and uses accents that brings the characters to life just as I imagine they would sound. I don’t typically like sound effects because they are usually overemphasized or inappropriate, but his demonic voices were very well done. His female voices were very natural.

I was given this free review copy audiobook at my request and have voluntarily left this review.
I enjoyed listening to this story. Would like to be able to listen to the sequels as well. thank you.

This is an interesting urban fantasy with fantastic characters in a realistic setting and despite being relatively short still manages to do a good job of creating a setting and some three dimensional characters with personalities and goals. Definitely interested in seeing where these characters are taken in their interesting universe.

Charm City is the first in what promises to be an exciting paranormal adventure series. Although the book is classified as a paranormal romance, I didn't find it romantic in the least. However, that is not a criticism. I really enjoyed the developing sense of camaraderie and friendship between the two main characters, Simon, a talented mage, and Chiara, a powerful blend of mortal and immortal beings. Both have been fighting for a very long time to exorcise demons from human possession and to send them back to Hell, and they find in each other a helpmate in this thankless battle. Simon is tormented by a past mistake that Chiara finally enables him to right. Simon proves to Chiara that she does not need to be alone and lonely in her quest to rid the mortal plain of demons. The story has lots of exciting action scenes, just the right amount of world-building to keep the story interesting without drowning in unnecessary detail, and a great sense of friendly chemistry between Simon and Chiara. They might have romance in their future, but this first book ends on a major cliffhanger that seems to mean more challenges in store for our couple before they reach that stage.

Roy McCrerey's narration is superb. He has a very deep, almost raspy voice that seems perfectly suited to the paranormal genre. His portrayal of the demons is especially enjoyable and gave me tiny shivers of fear whenever they popped onto the scene. I will definitely be watching for more of his audiobook performances in the future.

Good book and not just a good 1st episode

The first book in a new series can often be a difficult balancing act for an author, the first book has to be sufficiently self-contained that a reader can enjoy it in it's own right and not just as part of a larger series, but it also has to introduce a fair amount of the important characters of the series and set plot points up nicely for the rest of the series too. Luckily, the author manages to accomplish this balancing act very well indeed, producing an enjoyable read that works as a standalone book and as the entry point to a new series.

While, it is fairly stereotypical when it comes to urban fantasy books for the main protagonist to be a little rough around the edges, somewhat snarky but still principled, Simon Alliant works well as a main character that sort of reminded me of the way they portrayed John Constantine in the short-lived tv show. Other similarities in the case would be that he is aided by an enigmatic angel and encounters a woman with mysterious powers, albeit in the case of Chiara, her powers are basically a more natural version of the ones Simon has himself with her not needing the various charms, amulets etc that he does to carry out an exorcism.

The performance of the narrator was generally a good one with his tone and voices enhancing the book quite well, giving the characters distinctive enough tones to make them stand out, possibly his delivery could have been a bit quicker, but that is a subjective issue that is readily avoided with variable speed options anyway.

Overall, this was both a good book and a good start to a new series, which is just what you want from it.

Although the root of this tale is good, the execution is a little rushed, there isn't enough character building for me.
I feel this should have been a ten-hour story, not five and a bit, then there would have been enough time to get to know the characters.

There is one point that confused me a little, the writer calls a half-angel, half-human hybrids, Enochian's. As far as I know, Enochian is the supposed language of the angels and the hybrids are called Nephilim.

The narrating is of an average quality, although I did have to play this at x1.25 as he does tend to speak quite slow.

Overal, if you like stories about angels and demons then you'll probably like this, if not then maybe this isn't for you.

This audiobook was given to me for free at my request and I provided this voluntary review.