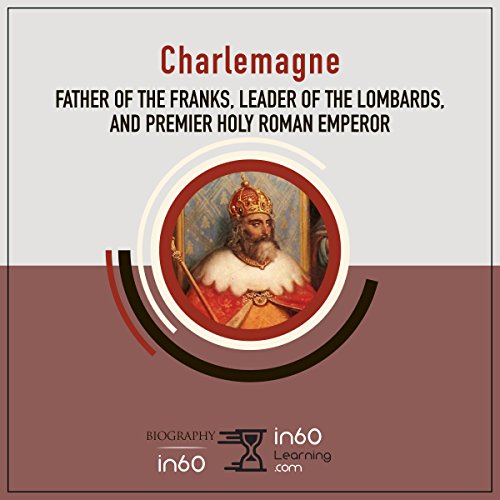 Charlemagne: Father of the Franks, Leader of the Lombards, and Premier Holy Roman Emperor

By: in60Learning
Narrated by: William Kenny
Try for $0.00

Charlemagne's name means "Charles the Great", a title he earned after an impressive life filled with military conquests. After the fall of the Roman Empire, invaders came from all sides, and Charlemagne fought out of loyalty to his people and the Catholic church. While he led many campaigns that helped to reunite Europe during the Migratory Period, Charlemagne primarily aimed just to claim land where he and his people - the Franks - could live in peace.

His life inspired countless tales, including the legends that he was 20 feet tall, that he slept under the guard of 100 armed knights, and that he rose from the dead to aid in the Crusades. While these fantastical tales are false, the truth is equally fantastic: By the end of his life, Charlemagne had been king of the Franks, king of the Lombards, and the first emperor of the newly formed Holy Roman Empire.

What listeners say about Charlemagne: Father of the Franks, Leader of the Lombards, and Premier Holy Roman Emperor

A quick dose of knowledge.

This is a typical subject that may have put you to sleep in School.

But in a short span of time you can learn about subjects you may have missed without entering Slumberland.

With a good Narrator you can quickly become Acquainted With The Holy Roman Empire and Charlemagne.

This Company is doing great work in bringing these Audio Books to the public and many people will benefit from
them.

Charlemagne: Father of the Franks, Leader of the Lombards, and Premier Holy Roman Emperor is the 2nd of these books I've listened to. It's a great concept, really well researched and the facts presented in a way that makes gaining new knowledge so easy. Charlemagne is a king whose name is known by many, but few know why he is considered a great king, perhap the father of France.
I was given a free copy of this audiobook at my own request, and voluntarily leave this review.

Like other audiobooks I've listened to from in60learning, this audiobook doesn't disappoint!

As the title suggests, Charlemagne or Charles the Great, was the King of the Franks, King of the Lombards, and Holy Roman Emperor in 800 A.D. He united much of western and central Europe during the Early Middle Ages. He was the oldest son of Pepin the Short and Bertrada of Laon. He became king in 768 after his father's death. He started off co-ruling with his brother Carloman I, who died a few years later under mysterious circumstances. This left Charlemagne as the sole ruler of the Frankish Kingdom. Charlemagne was a Christian, and he was very loyal to the papacy; he even went so far as to defend the pope militarily against the Lombards in northern Italy. He also led an incursion into Muslim Spain, hoping to convert the Muslims in that area to Christianity. When it became obvious to him that they would never convert, he withdrew from the area. He fought against the Saxons to his east, forcing them to convert to Christianity or be killed. He reached the summit of his power in 800 when he was crowned Emperor of the Romans by Pope Leo III. However, Charlemagne neither wanted the tile nor sought to benefit from it.

Charlemagne united most of Western Europe for the first time since the Roman Empire. His rule led to important achievements in western European culture, including an increase in literacy and unity within the region. Charlemagne gave us modern day France. He married at least four times and had three legitimate sons. Charlemagne died in 814 from a lung disorder.

I thought he narration of this audiobook was OK-not great, and not awful.

Once again in60Learning comes through with an excellent snapshot of Charlemagne's life, trial, tribulations and achievements. This book gives a great overview of a great leader's life. This would be a wonderful accompaniment to schooling or a great resource for those who just want to know, in summary, about Charlemagne. I will be using this book, as well as others by in60Learning, when the time comes to teach my children about various histories.

Another bit of insight

This is the fourth book I’ve read/listened to by in60Learning. I’m loving all their books. This one is no exception.
I was not aware of all the groundbreaking things Charlemagne did that influenced how we do/run things currently.

This is the first book I’ve listened to by this narrator and I would listen to another. He did well reading this content, and his pace was comfortable.

Good Concept, Too Much Editorializing

I like the concept in60Learning is aiming for, sort of a Reader's Digest crash course in historical events and figures. Obviously such a short work isn't going to make you an expert (or even an amateur) on a given subject, but as a means of becoming passingly acquainted with a topic or person, and possibly sparking deeper interest, these works can have value.

Having said that, I have a few issues with this work, 'Charlemagne: Father of the Franks, Leader of the Lombards, and Premier Holy Roman Emperor'.

My biggest gripe is the excessive editorializing. There are numerous instances in which modern moralistic judgments are passed on people groups and individuals, as well as repeated instances in which the author attributes motives and feelings to historical figures that are almost certainly imagined. Descriptions like "brutal and bloodthirsty savages" or "an angry sadistic people who gloried in the sight of blood" are found throughout, often with no indication as to which people group the author is referring. While such descriptions might be dramatic, they are out of place in a work that is intended to be educational.

The structure is also more topical than chronological, which I don't think worked in this case. Being biographical a chronological approach might have done a better job of familiarizing the listener with Charlemagne as a person, as well as better contextualizing the events of his life.

The narration by William Kenny is passable, but often halting and stilted. He sounds like he is taking great care in his reading which makes it sound wooden and uncertain, with frequent oddly placed pauses that disrupt the flow.

Given the historical nature of the work the inclusion of sources or a recommended reading section would have been nice. I know audio books are not really conducive to proper citation, but it would be helpful if the listener desired to learn more. The information (apart from the editorialized parts) seems reasonably solid, but there's really no substitute for good citations.

Overall I like the concept, but the execution needs work. Despite these issues, I would certainly be willing to check out more of in60Learning's work.

I enjoy the quick, informative lessons from in60Learning. They cover a variety of topics in sufficient, but not overwhelming detail, and they are often topics that are not touched in normal schoolrooms. I like knowing more about olden-time historic kings and events. I found it especially interesting to learn how this particular individual furthered written language, writing, and schooling. I was also fascinated by the role he played in the formation of the country of France.

The narration was good. The delivery was even and well-paced, and kudos to Mr. Kenny for his efforts in properly pronouncing the tongue-twisting names.

As usual, in60Learning does a fine job summarizing the life story of a person down into 60 minutes (or so). However, I was not a fan of William McKenny's performance. While the narrator pronounced all the words correctly, the cadence felt rushed and lacked any variation to help the listener determine when topics were being changed

In addition, this title included many more references indicating the superiority of the Christian faith and its believers over 'barbarians and their primitive pagan beliefs.' A scholarly text should not have such bias towards any one mythos.

Overall, not the worst history lesson I've ever had, but certainly not one of in60Learning's finer products.

A Brief History of Charlemagne and His Time

This particular offering seems a bit more light-weight than some of the other in-60 books. As usual it covers Charlemagne's military exploits and his reforms to government and social norms fairly well but at a high level. As usual, it's a great overview and starting point for someone wanting to gain a little more knowledge about the great leader and to place him in world history. Recommended as a place to start for someone interested in European history.

I enjoyed this short history of Charlemagne.William Kenny was a fine narrator.I was given this book by the narrator,author or publisher free for an honest review.