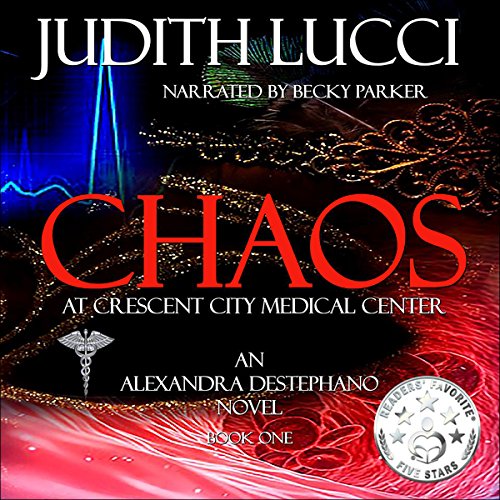 By: Judith Lucci
Narrated by: Becky Parker
Try for $0.00

"Move over Robin Cook - the queen of New Orleans medical thrillers is here!"

Do you love the Big Easy? You may feel uneasy when you learn about the City's sinister underground....

Hospitals are supposed to be safe places, aren't they?

It's Mardi Gras season in post-Katrina New Orleans. Thousands of tourists have flocked to the city, paralyzed traffic and jammed the French Quarter with drunken crowds and garbage. City officials expect record crowds and the biggest boost to the Crescent City economy since the big storm. Alexandra Lee Destephano, legal counsel for Crescent City Medical Center, is anticipating her third Mardi Gras season and her date with dashing art historian Mitch Landry to the biggest Mardi Gras ball in New Orleans. But hold on. Alex is stat-paged to the hospital and learns from her boss and former husband, Dr. Robert Bonnet, that the wife of the governor of Louisiana has been found unconscious and covered in blood in her hospital room. To make matters worse, patients have left the hospital against medical advice, and staff have refused to work. By the end of the day, the ball is the last thing on Alex's mind.

What listeners say about Chaos at Crescent City Medical Center

The Kindle version is excellent.

This is the first book I have listened to narrated by Becky Parker. It is also the last one. I cannot force myself to listen to that voice.

Loved this book. Cannot wait to read the rest of the series. Well done on a great book.

Great Read even if it is audio!

Weaves medical info into a convoluted and intriguing mystery. You don't want to take off your earphones in case you might miss something as the book rewind . Even better if you are familiar with New Orleans or the Alabama or Louisiana coast

Not a Medical Thriller of Note

This book was merely ok. I was expecting something more like Robin Cookk or Michael Palmer, but alas, that was not to be. The story was mediocre, the performance was ok and the characters didn't have anything that made me want to them to succeed. My favorite scene in the book is the shooting of the emergency room, and that's saying something because who likes a scene like that?

I won't say I won't read another book in this series, but if it isn't better than the first, I'll give up on this series.

Very thrilling and it kept my attention. Want to continue with the series however the second one in this series is still not available. I hope it comes out soon on Audible.

Excellent book I enjoyed it so much! You have a natural talent for Mystery writing.