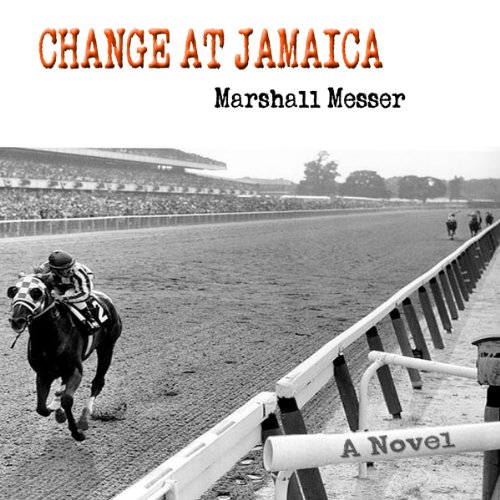 Grab a pack of KOOLs, rev up the Camaro, and tune in Stairway to Heaven - you're daytripping back to 1973. That's the summer Eddie Sacks, having flunked out of college, is driving a cab and trying to figure out exactly who and what he wants to be. The only place he finds common ground with his Nixon-loving, cigar-puffing dad (a.k.a. the Captain) is at Belmont Park, where Secretariat makes his historic bid for the Triple Crown.

Into the mix throw the Captain's brother Gene, of the Qiana shirts and rabid sexual imagination, and Gene's sultry daughter, the aptly named Randi. Meanwhile, paralyzing decisions loom, until the moment when Eddie is forced to take the measure of the father he fears and the uncle he pities, and finally define himself.

"Set in the era of Woodstock and Watergate, Marshall Messer's novel is a classic exploration of youth - its yearning, confusion, and desire for freedom. The language is precise, the voice honest and indelible. Reading Change at Jamaica is like listening to an old friend telling an intimate story with the wisdom of insight. This book is funny and sad and moving and I loved every page." (Chris Offutt, author of Out of the Woods and Kentucky Straight)
"Not only can Messer write like a charm, but he also takes on the double duty of narrator in the audiobook, wonderfully inhabiting every part and taking you back to a city that was once far crazier and far more interesting. A true exacta win." (David Gilbert, author of And Sons, The Normals, and Remote Feed)

Change At Jamaica is the story of Eddie, who is desperately trying to break away from his rich and powerful dad. There is a rich assortment of characters, who alone are worth the cost of the book: a Muslim cab driver named Moose; Eddie's first cousin, the randy Randy; the cursing Lipschitz, from whom Eddie leases a cab and rents a room. Each of the many voices--points of view, accents, emotions and all--are performed to perfection by the author on the audio edition, which is often NOT the case when writers read their own work.

The writing is tight, no extra words. Marshall Messer can't write a sentence that isn't good. The whole thing is full of irony and good humor. I found myself laughing out loud and then marveling so much at what I'd just heard that I had to replay it. I learned a lot too: about the geological birth of Long Island; the ins and outs of the rare coin business; horse racing; birds; the taxicab business; and more than I needed to know about human coupling. But I liked Eddie so much, I was able to slog through the sex scenes, and eventually I realized that they aren’t gratuitous; they fit, and they’re often hilarious, sad, and full of metaphor (as is the whole book). The language is superb, sometimes grotesque, frequently beautiful, and the novel reads wonderfully well. Needless to say, I recommend this book.