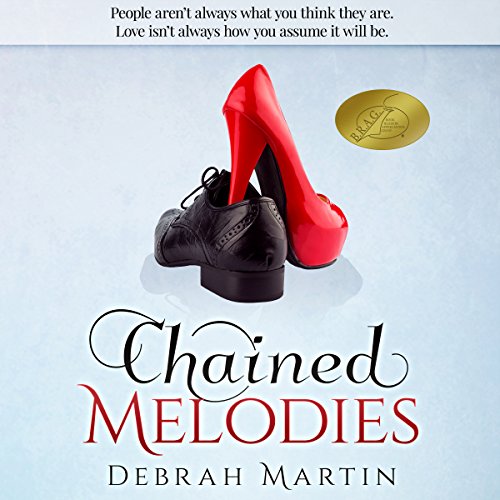 By: Debrah Martin
Narrated by: Rob Groves
Length: 11 hrs and 51 mins
Categories: Fiction, Gay & Lesbian
4.5 out of 5 stars 4.5 (11 ratings)
This title is included in Audible Escape

For fans of The Danish Girl, an extraordinary transgender love story about self-belief and the true nature of courage.

Best friends since childhood, life takes very different courses for Will and Tom when they leave school. Tom joins the army to become a man. Will goes to university and discovers he's not. When Tom turns up on Will's doorstep almost 10 years later, he's disillusioned and broken after surviving Northern Ireland during the 1970s troubles, and with a broken marriage and no future. Will, on the other hand, has just embarked on a completely new future for himself - in his case, a very different kind of self; a woman called Billie.

As Will transitions from male to female, so the boyhood friendship between Tom and Will changes too. Initial shock and repulsion on Tom's part becomes grudging respect, and eventually something quite different. But life - and falling in love - is never that simple; and especially not when it's in the face of prejudice, fear, and lost courage.

Give this book a chance


I was gifted this Audio ARC for a honest and unbiased review from the author/narrator.
Debrah Martin wrote a well developed book. It was a beautiful story between long time friends. It reminds me of the movie When Henry met Sally. One of my favorites.
Rob Groves made the characters come alive and I couldn't turn it off till it was finished.
This book is not for everyone but I loved every bit. Give it a chance.

STILL CRYING AS I WRITE THIS!!!!
I'm so used to books giving you something to think about then turning around and answering the question in the next sentences or paragraph.
Not here this book ask you a question then keeps you on the edge of your seat making you wonder, hope ,and plead maybe you get what u want maybe you don't take the chance and listen.

This is so freaking good! Emotionally exhausted

This is such a gut wrenching character study that I'm afraid to use those words in case someone thinks this is anything other than one of the most breathtakingly, heart wrenchingly fabulous stories I've ever read. This is right up there with Dr. Zhivago for capturing two people swept up in a world beyond their understanding, only the focus here is drawn in microscopically tight on two people you're not even sure you like when the book opens. By the end, I was driving through town sobbing (because I'm a commuter listener) and ready to kill the author because I thought, "No. There's no freaking way she can pull a Happy Ever After out of this." Except she did.

This is turning into one incoherent review because I refuse to give ANY spoilers beyond what I already have. The feeling is still raw, hours after the end. I don't want it to be over. But I'm glad it is, because I am emotionally exhausted. You don't read this story, you don't listen to it, you darned well FEEL it. The author is so incredibly good that she reaches deep into your guts and rips out feelings you don't even realize you have.

I hesitated getting this, because it's not something I would normally choose. This isn't my usual light entertainment to zone out the world. This is a deep emotional experience and will probably end up stuck on one of those lists of books that people are supposed to buy but are afraid of because it's so good. Love Story only better. Notice how I keep referencing really HUGE books? There's a reason for that.

The narrator absolutely NAILED the voices. I was so deep in the story and the character's voices so recognizable that I forgot I wasn't hearing real people. Genius!

Just get it. Set aside a serious block of time and lose yourself in it because you'll be snarling at anyone who interrupts you. I actually hogged a pump at the gas station, clutching the steering wheel and glaring like a mad woman at anyone who came near the car, just to hear the end without any more interruptions.

I have no words for this. I wish I had. Because I keep coming back to, "Oh my God! This is incredible! How do people write like this, because I am in awe."

A book just right for a new era of life and love.

I just love Debrah Martin for having created theese characters ! This book grabs you right at the beginning and doesn't let go. Twists and turns and then some more developments and my head is spinning and I can't put it down! Read this book!!!!
"I was given this free review copy audiobook at my request and have voluntarily left this review

Chained Melodies is a beautiful story with truly original and well-developed characters. It follows a 30-year journey between Tom and Will (later Billie) and their friendship from their tweens through adulthood and their realistic lives as blue-collar people. Although they go through their own personal growth and change, the chain remains unbroken despite their different paths. Tom accepts Billie for who she truly is which is a sign of true love and friendship. This story will touch your heart if you give it a chance

An interesting view into the psyche of a young man

Where does Chained Melodies rank among all the audiobooks you’ve listened to so far?

This is not the type of book I typically read. The author did a great job of exposing a lifestyle and the emotions of a young man struggling with his own sexuality. This is a very deep subject matter and I think handled well by the author.

Which character – as performed by Rob Groves – was your favorite?

The narrator played the role of Will and through the dialogue and the diary he made the character real. i struggled at first with the British accent but after the first chapter, the accent was in character and it was natural for this story and the location of the book.

While I personally don't embrace the lifestyle of Will. I did find this book interesting as it helped me to see into the mindset and emotion of someone who struggles with these decisions and the turmoil they experience. They are mocked and ridiculed and most people don't take the time to even try to understand them.

"Sometimes, in life, we have to improvise."

Simply stunning.
Tom and Will become unlikely best friends at school. Very different, they share one thing: both want to get away from their home town. As adults, they drift apart, Tom joining the army, a real man's man, Will going to university, then London, and struggling with his own identity. Eventually they meet again, their shared memories bringing them ever closer to, finally, give shape to both their lives.

Such a beautiful book, well written in alternating remembrances and internal dialogue from the points of view of Tom and Will, and sensitively read by the gentle voiced Rob Groves. His reading adds an even greater dimension to the characters of the two main protagonists - no easy feat given how fully they are already drawn by author, Deborah Martin.

This is a love story but not of the usual kind. Totally engrossing, I recommend everyone to read it. It is harsh and cruel, sweet and sublime, two totally different lives , in depth, in loneliness, in life, "both aliens in an alien world today." Yes, simply stunning.