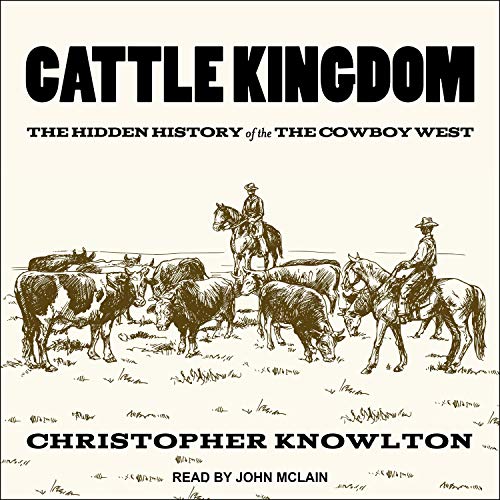 By: Christopher Knowlton
Narrated by: John McLain
Try for $0.00

The Open Range cattle era lasted barely a quarter-century, but it left America irrevocably changed. These few decades following the Civil War brought America its greatest boom-and-bust cycle until the Depression, the invention of the assembly line, and the dawn of the conservation movement. It inspired legends, such as that icon of rugged individualism, the cowboy. Yet this extraordinary time and its import have remained unexamined for decades.

Cattle Kingdom reveals the truth of how the West rose and fell, and how its legacy defines us today. The tale takes us from dust-choked cattle drives to the unlikely splendors of boomtowns like Abilene, Kansas, and Cheyenne, Wyoming. We venture from the Texas Panhandle, to the Dakota Badlands, to the Chicago stockyards. We meet a diverse array of players - from the expert cowboy Teddy Blue to the failed rancher and future president Teddy Roosevelt. Knowlton tells us how they and others like them could achieve so many outsized feats: killing millions of bison in a decade, building the first opera house on the open range, driving cattle by the thousand, and much more. Cattle Kingdom is a revelatory new view of the Old West.

What listeners say about Cattle Kingdom

Disappointing - Author has an Agenda

I did not know

All I knew was from the fictionalized, glorified tales of The West on black & white TV. This was eye-opening. This book helps me understand the origins of some of the awful behaviors of today's U.S.A. culture.