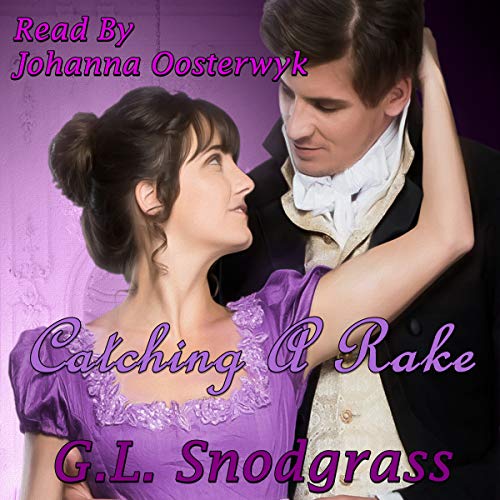 By: G.L. Snodgrass
Narrated by: Johanna Oosterwyk
Try for $0.00

Olivia Caldwell always believed the man to be insufferable. Unfortunately, he was her brother’s best friend, therefore unavoidable. And while Lord Bradford might be opinionated, domineering, and a notorious rake, he was also the only man in England who was able to rescue her from kidnappers. A fact that was going to lead to her worse nightmare: a marriage of convenience to the one man who she could not control.

Lord Bradford knew the woman was demanding, opinionated, and a thorn in his side since she was a little girl. Now, beautiful, charming, and with a tongue sharper than a Sheffield blade, she was a man’s worse nightmare: a woman who could capture his heart.

But, society's rules demanded he wed this hellion. His only hope: have her surrender to him. If he failed, he would surely surrender his heart to her, and that way lay madness.

What listeners say about Catching a Rake

This heroine is so head strong she needed saved ftom herself!!!! She smart and strong, but doesn't see what's right in front of her. smh!!!!!
Good thing her paramour has some foresight to be able to save her from heself!!! Good story. I voluntarily listened to a free copy of this and am giving an honest review. The narrator did a good job.

The story was good however the author use the expression sighed heavily repeatedly it actually became distracting.

these rakes!! love the story and brilliant read. thank you for this free book x