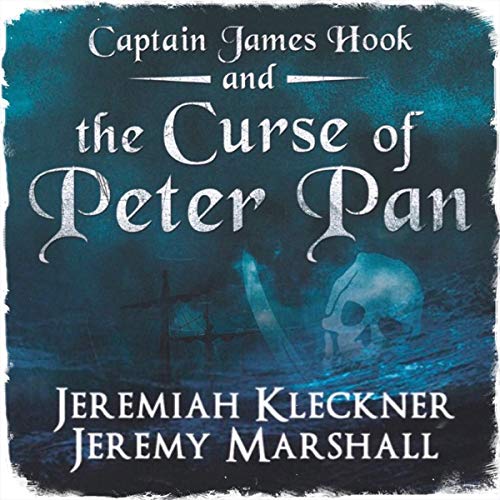 Captain James Hook and the Curse of Peter Pan

By: Jeremiah Kleckner,Jeremy Marshall
Narrated by: David Stifel
Try for $0.00

Captain Hook has been captured by the British navy and is soon to be hung.

As Hook tells his life story to his captor, it becomes clear that the fearsome pirate was once a scholarly boy - until one fateful night in Port Royal when he meets the volatile Peter Pan...

Raise the Jolly Roger and discover the book that opened thousands of eyes to the possibility that, once upon a time, Captain Hook was not the villain we know him to be.

Since its publication in June of 2012, this original story takes you through Captain James Hook's rise to piracy, including his first confrontation with Long John Silver and his service on the Queen Anne's Revenge alongside Blackbeard at the Charleston Blockade.

This book is not a retelling of the events of J. M. Barrie's beloved novel. It's a defense of the world's most famous pirate, told by the man himself.

Captain Hook has reason and wit behind his hatred for Peter Pan...If only someone would listen.

HOOKED from the start

I will never think of Peter Pan and Captain Hook the same way again. This is an engrossing and well written background story. The characters were believable and even though this is only a 5 hour book, in those hours you really got to know the characters. I enjoyed that the story opened with Hook as a boy, a boy who clung onto the characters from his childhood while growing up in the company of pirates. His realization at the end about the events which lead to his father's demise brought the story full circle, leaving me completely cheering for Captain Hook.

The narration by David Stifel was brilliant. The true voice of a storyteller, and one of the best male narrations I've listened to in recent years. The narrations that truly grip me are those where I forget there is a narrator and get "lost" listening to the character. This was that type of narration. David Stifel's Hook is dignified, loyal, and intelligent.

As a parent I can also say this is an appropriate book for kids probably ages 9+. Although there are scenes of sword fighting and death, none is described in graphic detail. I think kids, particularly those who like pirate stories, would really enjoy it. The narration is articulate and would be easy for kids to understand. I have already recommended this audiobook to friends.

Captain James Hook and the Curse of Peter Pan is enticing from the first word. The description of Hook leads the reader into the book; “His eyes are so narrow that they never seem to blink” and he “smiles with everything but his eyes.” The authors create a fascinating character, dangerous but hypnotic. The first chapter sets the tone so well, not only of Hook’s character but all the great winks towards the Captain Hook you grew up with, like his pocket watch that ticks very loudly.

As the story progresses, more and more familiar characters from Peter Pan enter and begin to play their part. The genius of the authors is that no one plays the part you expect. Is Hook the villain? Is Pan the hero? Side characters like Smee are also not as one would assume. The characters of this book incorporate more shades of grey and live in a morally ambiguous world. It would be difficult to discuss the plot without giving anything away. Trust me, this is one plot you want to uncover for yourself. It will hold your attention to the last word.

David Stifel’s narration of Captain James Hook and the Curse of Peter Pan was fabulous, one of the best narrations I have ever listened to. His voice can be honey smooth or dangerously sharp. Not only does he convey the personalities of the different characters, he does a fine job of conveying each character’s emotions. The authors need to sign him to a long term contract for this entire series. The production values of the audiobook were first rate. The sound is clear. There are no extraneous noises or changes in volume.

I enjoyed this audiobook very much. I was not able to listen one day because of location so I purchased the kindle version. While I still liked the story, this is one situation where the audiobook brings a whole new dimension to a book. The narration adds precious gold and silver threads to the tapestry of the narration. For example read the line, “When I turned the body of my father, I expected the world to collapse around me but, strangely, it didn’t.” The lines could convey a total lack of feeling for a son for his father. But when Mr. Stifel narrates that line, it conveys a totally different emotion. It conveys a boy thrust into manhood through a traumatic event, a boy who has neither time or fear or grief because surviving has become the only thought. It really is a masterful narration.

Not at all what I expected.

A swashbuckling tale of piracy and revenge in a creation of the back story of Captain Hook from the tale of Peter Pan. Like the Count of Monte Cristo it highlights the destructive nature of revenge and shows a man unable to accept responsibility for his own actions. A very good read if a little difficult to start initially.

Best version of this story I've ever heard!

This is definitely the best version of the Peter Pan story I've ever heard! The Authors did a great job and the narrator is amazing! This is a completely different twist on the classic story!

Great story, Great author. It is absolutely worth the purchase and read. It has adventure, humor, drama, all that you want in a book. You wont be disappointed.

I love Captin Hook stories, but this was so bland and I found myself not caring at all about the characters. Don't waste your time.

This was one of the best origin stories .....

I've ever heard. I would totally watch this movie if they adapted it. Good Form. lol

I’m a big Captain Hook fan and love it when authors spin stories of what could have happened. Jeremiah and Jeremy present such a story on the life of a GOOD man forced to become the notorious pirate he is known as today.
David, nice name ;), does a splendid job of narrating this tale. Now I HAVE to get the sequel: Siege of Neverland!

I really enjoyed hearing of how Captain Hook got to be who he was.Poor guy.David Stifel was the perfect narrator for this tale.I was given this free review copy audiobook at my request and have voluntarily left this review.'

You find yourself loving hook and hating pan.

The narrator makes this book so much better. It reads like an old classic without it being written in an older English. Good dialect use to give the story depth. Hook comes off as reasonable. When you listen to this book as an adult you side with hook and you realize what an as Pan is. It's a good retelling with out it being the same story.