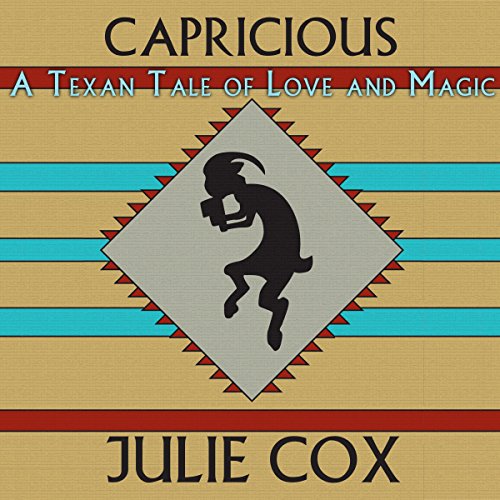 Welcome to Fox Pass, Texas, a small community where the people are friendly and the mythical creatures aren't so mythical after all.

In Julie Cox's Capricious: A Texan Tale of Love and Magic, satyr and Fox Pass native Luke is settled into a comfortable routine of drinking beer with his best friend, cultivating his small plot of land, recharging the raw sexual energy that fuels his magic, and willfully ignoring his feelings for his friend Sally. But Luke's daily life is thrown into disarray when he becomes the target of mysterious enemies who won't hesitate to hurt his fellow myth-folk to get to him. With the help of his friends, and some earthshaking satyr magic, Luke works to protect his town - and sort out his feelings for Sally - before it's too late.

What listeners say about Capricious

What made the experience of listening to Capricious the most enjoyable?

And the sex moves the story forward, it isn't just grafted on.

I really enjoyed the e-book version, but Nobilis Reed's characterizations and voices transformed the story, brought new depth to the written text. I'm a voracious reader, not one to usually go to the audio version first, but in this case the audio brings so much.

Luke, our satyr hero, is randy, flawed, blissfully ignorant of the most important people around him, the sort of creature I both aspire to be, and flawed enough that I still identify.

Which character – as performed by Nobilis Reed – was your favorite?

It's hard to pick one, Nobilis manages to give enough distinction that they're all important. Even the women's voices are distinct without being over-done.

A rollicking adventure, sex, magic, characters who have real meaning to each other, fighting for their community and friends. Funny and tender, what more could you want?

Rich and real, with something for all tastes

I thoroughly enjoyed this book. While it's not in my normal wheelhouse, I do love to read outside my comfort zone now and then, and this book was a great adventure out of my normal to-read list.

The characters in this book were varied, and holy cow was there some interesting diversity--in a manner of speaking--between them. Besides the satyr, we get trolls, goblins, fae, and even a headless horseman. Cox has pulled the rich history of folk and fairy tales into the present and given them a place in southern USA.

It could have been easy just to ride that gimmick and not give the book substance, but the plot and threats and especially relationships between characters is so real it was almost painfully true. And as for the... more graphic and risque parts of the book, we get a lot of variety there, too. No spoilers, but there's something for everyone in this book.

A fresh new take on supernatural and fae worlds

Where does Capricious rank among all the audiobooks you’ve listened to so far?

It's hard to rank as I have a huge library, but I really enjoyed this title. I'd recommend it to others who read erotica, and even to those who normally don't. The story is compelling and really interesting for me. I always love when there is a new take on the supernatural world, I am in love with the world that Julie Cox has created. I want more stories with this idea.

I think Luke was a compelling character but really most of the characters were interesting. I could have learned more about each of them.

Have you listened to any of Nobilis Reed’s other performances before? How does this one compare?

Yes, this is on par with his other narrations. Very clear.

I wasn't putting it off as I wanted to know what happened with the rest of the story. I put off listening to other things to listen to this book.

I really enjoyed this book and will be recommending it to others. It really is engaging and I hope there are more stories set in this world to come. I am in love with this world.

I received this book in exchange for a honest review.

This was an original story that you don't see all the time! It jumps right into a steamy sex scene, making you stop long enough only to fan yourself. The story that follows has Satyrs, Jersey Devils, Fae folk, as well as others of mythical origins. Although it starts a bit slow, it progresses into a story that you don't want to pause or stop reading.

I loved that this story not only touched on traditional relationship types, it also had threesomes, polyamory, and gay relationships. It was refreshing to read something that didn't have a forced feel to it.

When the story started to progress forward, it was like a snowball going downhill. It wrapped you up and kept gettting bigger and bigger, enveloping you in love and adventure, while leaving you satisfied in its wake. The end wraps everything in a bow and hands it to you on bended knee.

It was a story that i would be able to read and enjoy again.