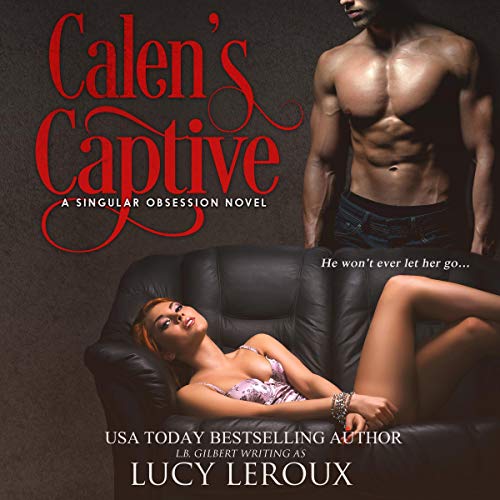 "There is just the right mix of drama, danger, and sex to keep the listener riveted until the end." (Michelle Mollohan for Readers' Favorite)

Calen is a good man from a bad family, but when the girl of his dreams falls in his lap can he do the right thing and let her go?

Calen is the son of an Irish mobster, but he’s rejected his legacy and has made a name for himself as a club owner. After years of hard work, he has the life he’s always wanted. Almost.

Then his father asks him to take a meeting with a rival crew. It’s too important to say no. Reluctantly, he drives out to the middle of nowhere to meet them. There to negotiate for reparations, he sees an innocent girl being held against her will - someone who looks very familiar.

Unwilling to leave the girl to a fate worse than death, he demands she be included as part of the deal. Maia is forced to stay with Calen for her safety, but she soon finds out he has ulterior motives for protecting her....

Each novel in the Singular Obsession series is a stand-alone featuring a different couple. HEA guaranteed. Not suitable for listeners under 18.

Listen to the complete series:

What listeners say about Calen's Captive

A totally awesome story with minimal relationship drama which I greatly appreciated; typically authors add extra relationship uncertainties and insecurities unnecessarily but this one surprised me. The deep and unwavering affection Calen had was refreshing and Maia's willingness to go along with little internal struggle made the story flow easily.

The narrator did an amazing job with the character voices and didn't rush through any portion. Even the sexy time groans were authentic and hot.

I'll definitely look for more audiobooks from both author and narrator.

I received a free audible code through a Facebook group giveaway and am providing my honest review voluntarily.

Calen and his Nymph

I thoroughly enjoyed this book. Calen is a doll and Mia is an inexperienced little scientist. Together they make a great pair. Calen rescued her when doing a mafia deal for his father with the Russian mafia and insisted they include her as part of the settlement (she witnessed the Russian mafia guys disposing of a body while she was chasing butterflies for her work in the lab). Calen took her to his penthouse to have his doctor tend to her injuries. He decided she would be safer if they were married. The story continues with them getting married and how one member from the Russian mob still wants her back.

Ave Paige did a great job with the narration. I was given this free copy audio book at my request and have voluntarily left this review.

She is forced to stay with him for her safety, but she soon finds out he has ulterior motives for protecting her....

Drama, danger and intrigue all rolled into one which was just so perfect. Alluring and captivating.

I was super surprised at how much I enjoyed this story! Don’t let the cover fool you. I thought this was going to be a dark mafia type romance but it wasn’t. I like dark mafia romances but this book was a sweet and steamy love story. I thought both characters were really great and the narration well done.

Calen is a dominant, loving protector!

I asked to receive this free review Audible book and wrote this unbiased review. This is a riveting story filled with suspense, mafia criminals, sexual awakening, angst, and love. There is instant attraction when Calen first saw Maia so when he sees her needing his help, he takes action. I love how the author develops Maia's character and how Calen shows her so much patience and love. There will be passionate and explosive love scenes. Maia will face a deadly foe. The narrator does a great job of portraying the emotions and personalities of these characters. She breathes life into this story. I highly recommend this Audible book and it's a book that I will listen to again.

This is the first book of Lucy's that I have read and it definitely won't be my last. I really enjoyed the relationship that bloomed between Calen and Maia. Their relationship started off a bit messed up but you couldn't help but root for them.

Avie did a great job on the narration. I look forward to listening to more of her work in the future.

This was my first audiobook, well book in general, by Lucy Leroux. Calen's Captive is the second book in the series, I do plan on listening to the first after this. I thought the narration was really good for the story and I found that my morning commute went by a lot faster. The story was captivating.

Overall this was a good story. I always love a good jealous/posessive man and innocent girl story. I also liked the Irish character names.
Avie Paige is a new narrator to me. I love her voice but I think the story would have been even better if it was a dual narration.
#AudiobookObessionReviewer

This is the second book in A Singular Obsession Series. Calen and Maia's story is great. Calen is possessive, protective, and powerful. Maia is a strong woman. They share a sizzling chemistry. The storyline is fast-paced, and suspenseful, filled with danger and twists and turns. Avie Paige did a good job with the narration. Looking forward to listen to the next book in the Series, Stolen Angel. #AudiobookObsession

This is my first book in the Singular Obsession series. It was captivating and seductive. Calen was a bit creepy with his obsession and with his pet names for Maia but overall I loved both characters. I really enjoyed this dark romance and will be continuing on with this series. Avie Paige did a great job bringing this story to life. I received this audiobook at my request and have voluntarily left this unbiased review.

This is the first book of Lucy's that I have read and it definitely won't be my last. I really enjoyed the relationship that bloomed between Calen and Maia. Their relationship started off a bit messed up but you couldn't help but root for them.

Avie did a great job on the narration. I look forward to listening to more of her work in the future.

Not your average love story

Calen is a club owner. His father is a mobster. He sees a fairy like woman in his club and wants to find her. She has him entranced

Maya, a student, is out searching for specimens, when she stumbles and 2’men disposing of a body. They capture her.

I liked this story and enjoyed listening very much. There was some mystery, some intrigue, and some love story.

Lucy Leroux wove a great story! And Avie Paige has a pleasant voice and made the characters come to life!

Calen is obsessed with fairies and Maia looks like one. He saves her from being abused and killed. This book takes you on a journey through all they have to go through to have a relationship without having to look over their shoulder for danger.
Good Narration
🎧 Audiobook Obsession

This is my first book in the Singular Obsession series. It was captivating and gripping. Calen's obsession came off as a bit creepy but he really was a likable character. Maia found herself in a difficult position but was lucky to find her knight in shining armor. I really enjoyed this dark romance and will be continuing on with this series. Avie Paige did a great job bringing this story to life.
🎧AudiobookObsession

Good story with some slow parts

I expected this book to have a more dangerous hero but I feel like Calen wasn't so much dangerous as just protective. I mean, the background story was about how Maya was in danger. She saw something she shouldn't have and was captured. Luckily, Calen was doing a favor for his father and saw her and ultimately saved her. He is really captivated by her and they had actually a really sweet relationship. She was totally innocent and naive, he was worldly but still, absolutely enchanted by her, in part because of his obsession with fairies. (that's pretty funny). There's a bit of action but I did feel like the story dragged a bit. I enjoyed their interaction, appreciated how he treated her and liked that she was growing stronger emotionally as their relationship developed.

Avie Paige, the narrator, was ok. In the beginning, I felt like she didn't have consistency between the different voices so she played her characters using different voices for the same character. However, she improved as the story continued. I think the issue is that while she did well, her male voice still sounded very feminine and the author would benefit to have her story read by both a male and female narrator. She also had such a smooth voice will only a little changes in inflection so some of the emotions such as anger didn't come through as much.

These singular obsession books are easy to obsess over! This second book in the series had be hooked and I had to see what was going to happen. Lucy Leroux weaves a tale of Calen's fascination of Maia. He sees her briefly in his club, and then in a precarious situation. After negotiating her release to him, he decides he is going to keep her. But will she want to stay? At first I thought I was going to be listening to another story of Stockholm syndrome, but this book is anything but that. Leroux has us sucked in to Calen's life so much, feeling his love that we fall for him, hook, line and sinker. Maia is far from infatuated though. She has a mind of her own, and their relationship evolves over time. It's steamy and passionate and I can see how easily they become obsessed!

Avie Paige brings it all out with her fantastic narration. It's spot on in every aspect. She has voices that are easily distinguishable with every emotion. And when the suspense is high, she adds that extra feeling so we know there is danger. I loved it!

Calen's Captive was a good listen

I first read Calen's Captive (and other titles in this series too) a few years ago but I remembered it being a pretty good read. My opinion hasn't changed a bit. I liked Calen's obsession with his fairy, he had the cutest albeit still caveman-alpha attitude.There was no other woman for him as soon as he first set his eyes on Maia. She was innocent in every aspect of the word. I liked how Maia fit in Calen's family in spite of their antagonistic behaviour.

Avie Paige's narration was pretty good. She had good voices. The quality could have been a tad better but it still was entertaining.

ummm, still at a loss for words

This book was well written with some really captivating characters. The situations and dialogue felt fresh, and the narration just brought it all home. WOW. The author is a great story teller and just brought this book out of a trope into this hard to put down story. A definite must read.