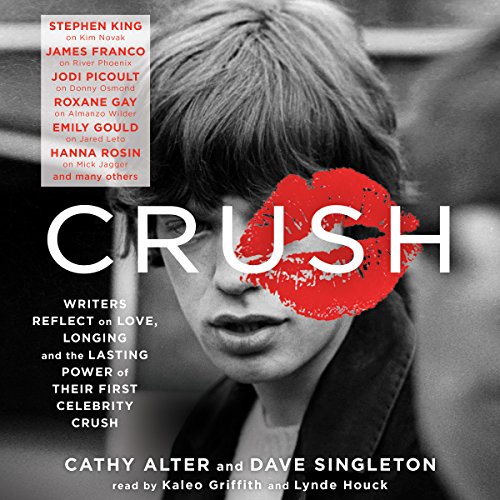 A star-studded collection of essays from acclaimed and best-selling authors and celebrities that illuminates the lasting power of desire and longing and celebrates our initiation into the euphoria, pain, and mystery that is our first celebrity crush.

You never forget your first crush....

A few contributors channeled their devotion into obsessively writing embarrassing fan letters. Some taped pics in school lockers. Others decorated their bedroom walls with posters. For tweenaged Karin Tanabe, it was discovering bad boy Andy Garcia playing the gun-loving mobster Vincent Corleone in The Godfather III. Barbara Graham unsuccessfully staked out an apartment on Park Avenue for a glimpse of her blue-eyed soul mate, Paul Newman. There was only one puppy for six-year-old Jodi Picoult - Donny Osmond - while Jamie Brisick's preteen addiction was Speed Racer.

Swoon-worthy and unforgettable, the essays in CRUSH will leave you laughing, make you cry, and keep you enthralled - just like your first celebrity crush.

If you could sum up CRUSH in three words, what would they be?

This audiobook won the AudioFile 2017 and Earphones Awards.

"What’s it like when you’re so in love, so infatuated that you can hardly breathe? What happens when you’ve fallen in love with David Cassidy or James Franco or Carrie Fisher or Kim Novak? The subject of going head over heels for unreachable celebrities hardly sounds earthshaking or laugh-out-loud entertaining, but it’s all that and more when narrated by the talented Kaleo Griffith and Lynde Houck, who deliver all the charm, truth, embarrassment, and emotional nuance in these 38 essays by contemporary writers. Hearing these fine writers wear their hearts on their sleeves turns out to be one of the best listening experiences of the year, both magical and poignant. B.P. Winner of AudioFile Earphones Award © AudioFile 2016, Portland, Maine [Published: JULY 2016]"