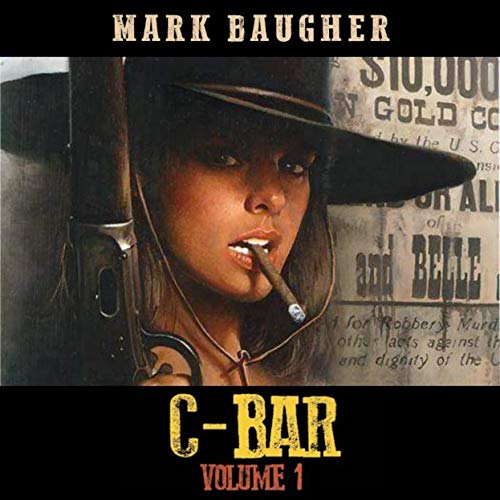 By: Mark Baugher
Narrated by: Francis G Kearney
Try for $0.00

Guns! Glory! Action! From Mark Baugher, the best-selling author of Cimarron Frost, Bounty Hunter, comes his best Western, C-Bar: a Western saga. Action, adventure, and gun smarts come in many forms. For Baugher, it comes in the form of his ability to write Westerns - a Western he knows how to write better than almost anyone else.

Filled to the brim with action, adventure, plot twists, and gunfight justice - Dockie is not a man to be crossed. This audiobook is filled with the dead, the dying, and those who don’t get in his way - because those who do cross Dockie end up dead. Real dead.

This exciting Western tale is told by Chris, the nephew of a tough old pioneer named Dockie Barnett, owner of the C-Bar Ranch. Chris was a city slicker attorney when he first came to visit his Uncle Dockie and Aunt Marsha, but he became one of the C-Bar Ranch family and a real cowboy. This is his adventure... an adventure you won't want to miss!

If you like your Westerns written in the style of Robert Hanlon, Bruce G. Bennett, and Paul L. Thompson, you will love C-Bar: a Western saga! Listen today, and start an audiobook filled with action, adventure, and drama - and the hopes and dreams of the American West.

C-Bar is now available as a major motion picture!

What listeners say about C-Bar