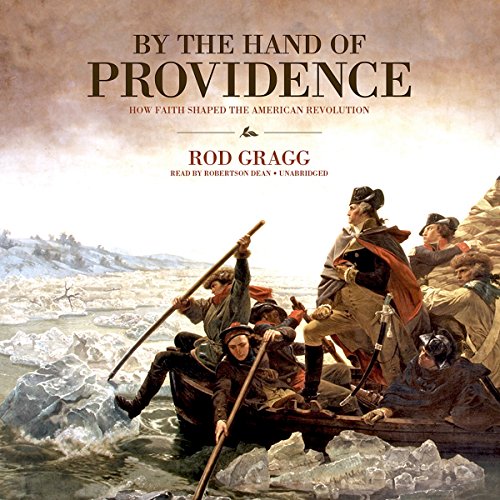 By the Hand of Providence

By: Rod Gragg
Narrated by: Robertson Dean
Try for $0.00

This fascinating history, based on meticulous research into the correspondence and documentation of the Founding Fathers, from the crafting of the Declaration of Independence to the signing of the peace treaty with Britain, sheds light on how the Judeo-Christian worldview motivated the Founding Fathers, influenced national independence, inspired our foundational documents, and established the American nation.

Written with the pacing and feeling of an enticing drama, By the Hand of Providence is crafted for popular appeal with a compelling mix of dramatized story and action-driven narrative - but with the authenticity and academic verity of historian Rod Gragg.

A former journalist, Gragg is director of the Center for Military and Veterans Studies at Coastal Carolina University, where he also serves as an adjunct professor of history. His works have earned the Fletcher Pratt Award, the James I. Robertson Award, and other honors and have been selected for the Book-of-the-Month Club, the History Book Club, and the Military History Book Club.

“ By the Hand of Providence skillfully examines the faith-based core beliefs of the revolutionaries - and convincingly refutes the contention that George Washington was an uncommitted Christian or a deist.” (Edward G. Longacre, historian and author of  Cavalry of the Heartland)
“Fascinating…Gragg shows the decisive importance that Americans of the 1770s and ’80s attributed to the providential intervention of God in the momentous events of the Revolution.” (Dr. Steven Woodworth, author of  This Great Struggle: America’s Civil War)
“Rod Gragg has done it again! A page-turner that reads like a novel! I found myself not only wanting to devour the next page, but praying for our nation, ‘O Lord, do it again.’” (Dr. Harry Reeder III, senior pastor, Briarwood Presbyterian Church, Birmingham, Alabama, and author of  The Leadership Dynamic)

What listeners say about By the Hand of Providence

This book brings to life again the great people that pledged their lives, their fortune and, most importantly, their sacred honor to the cause of liberty and freedom to worship their God. It reminds us that all 13 colonies were filled with God loving and God fearing people who sought a place to freely express their religious beliefs. Even the Congress declared days of prayer, fasting and supplication multiple times each year during the conflict to ask God for help in creating the country. Then when victory was achieved, they declared days of religious thanksgiving for all to celebrate the founding of this virtue based nation. George Washington was quoted throughout the book, certainly demonstrating that he sincerely believed that Providence was the reason the patriots won. It was a pleasure to listen to this great story. I found the quotes from George Washington, from the Congressional declarations and from others very interesting and they provided evidence for the author's statements about the colonists relationship with God. If you are interested in the history of the revolution, this book is an excellent addition to your library.

This book for ever puts to rest the question: is America a nation founded by faith

Marvelously researched and written. Packed full of keen insights and great inspiration from beginning to end.

By The Hand of Providence, should be required reading in public schools. It dispels the secular/atheist myth that America was founded by deists at best with a smatterings of Christians thrown in. From George Washington, to John Adams, Patrick Henry to General such as Nathaniel Greene and Dan Morgan, these were men of piety and reverence for the “Hand of Providence” They saw the Christian God as central to American Independence not a thing done on the side. The Christian Faith was center of American life in the 18th century, and any failures in military operations were viewed by Patriots as a failure of Americans to live by their Christian morals, calling for days of prayer fasting, thanksgiving to the God of Creation to deliver them through. For any American how still lives by their Christian Faith and fears where our country is headed this is a MUST READ. It will give support and credence to your faith walk that God is merciful, does miracles, and gives blessing unto those who stand in His name, and for his Son.

it's amazing how far of track u.s have got since then whith corrupt people in government thank god for trump trying to bring us back to the real America George Washington would be proud of trump 🇺🇸🇺🇸

This book will let you know it is ok to have heroes. These men were great men who truly believed in God.They were not perfect but they followed the One who was perfect. This book will make you feel good about being an American. Which is something we desperately need in this day.

a little monotone but ok

I got bored and gave up with about 2 hours left. It wasn't really very exciting, maybe it was the narrator, not sure.