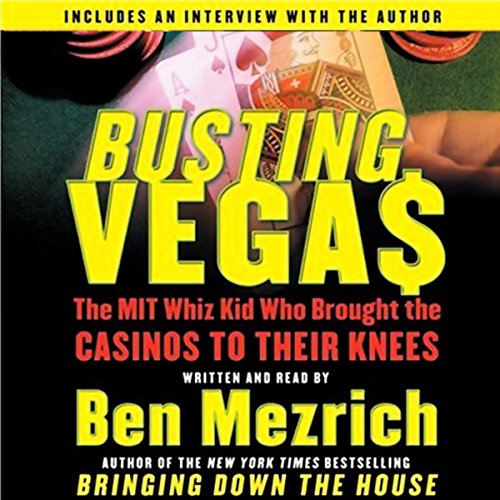 He played in casinos around the world with a plan to make himself richer than anyone could possibly imagine, but it would nearly cost him his life.

Semyon Dukach was known as the Darling of Las Vegas. A legend at age 21, this cocky hotshot was the biggest high roller to appear in Sin City in decades, a mathematical genius with a system the casinos had never seen before and couldn't stop, a system that has never been revealed until now; that has nothing to do with card counting, wasn't illegal, and was more powerful than anything that had been tried before.

Dukach and his fellow MIT students hit them all and made millions. They came in hard, with stacks of cash; big, seemingly insane bets; women hanging on their arms; and fake identities. Although they were taking classes and studying for exams during the week, over the weekends they stormed the blackjack tables only to be harassed, banned from casinos, threatened at gunpoint, and beaten in Vegas' notorious back rooms.

The stakes were high, the dangers very real, but the players were up to the challenges, consequences be damned. There was Semyon Dukach himself, bored with school and broke; Victor Cassius, the slick, brilliant MIT grad student who galvanized the team; Owen Keller, with stunning ability but a dark past that would catch up to him; and Allie Simpson, bright, clever, and a feast for the eyes.

In the classroom, they were geeks. On the casino floor, they were unstoppable.

What listeners say about Busting Vegas

For a story about "busting" Vegas, these characters never really get their act together. It's more a story about how well the casinos are at spotting and dealing with potential trouble makers. What could have been an interesting magazine article is expanded with a tepid love story, and a load of hard boiled exposition that hopes to make the story sound a lot more interesting then it is. Unfortunately, any attempt to enliven the story is squashed by the author's flat delivery. Not that I would recommend the book, but to anyone who's thinking of reading it I suggest buying the printed version. Maybe the writing fares better when not read by someone who sounds like he's standing in front of his High School english class reading a book report.

Busting Vegas reads just like many of Mezrich's other books, where much of the plot seems to be a "cookie cutter" -young stud wants a young hottie and is involved with a scheme to make bookoo bucks- like "21" or "Sex on the Moon" or "Ugly Americans"... But since it's a Mezrich, it is done well and is entertaining and will probably be made into a movie. This time I recommend reading the original rather than waiting for the movie.

This was a great book, although I should say highly "Hollywood-ized."

I really loved this book, and I recomend it to everyone!! The details on how this team "Busted Vegas" is outstanding! I would only warn people to remember that this book is "Based on a true story" not infact a true story. You'll see what I mean when you listen to the book.

Great book I couldn't stop talking about it with my friends after I read it!

Don't expect another Bringing Down the House when you listen to this book. The book jumped around too much, not developing the scenes enough, nor the characters. For a story based on real events, it was written in far too fictional of a style.

One last complaint, unless the author has a great voice, he should NOT be reading his own book. Don't be cheap, pay a professional to read it!

A fansinating, inside look at a portion of the gambling industry. This is a well told and well read account of what a little ingenuity can accomplish, or perhaps I should say can destroy.

Very entertaining. Ben Mezrich has great style, and the reader was excellent. See also Ugly Americans. I recommend this book.

Frankly, I was expecting another tome on card counting. This takes card counting to a whole new level. It was nice to hear some fresh ideas on the subject.

This reinforces my negative view of American Casino?s and their operators. I prefer the London method of barring play.

All in all it was a great story.

Would have benefited from an expanded explanation of card counting

I've read a number of books about blackjack and even did business with the original author of beat the dealer. The author assumes that the reader is from Milyer with more Monday and card counting approaches and I believe it's something he handled in an earlier book. Nevertheless a brief chapter on the topic and the storied history of this approach what I have enhanced the book.

one of Ben Mezrich best

It was a great story, just missing lots of bits that I wish were in there.

The author writes fiction as well as non-fiction, and as he says himself in the interview which is included in the download, his non-fiction reads like fiction. This book reads like a well written novel, with a good balance between narrative and vivid description which makes the story more enjoyable. The story and the characters are interesting, the more so because it is a true story. It well deserves 4 stars.

great true story, well performed and written. The cheesy unnecessary musical interlude let it down on the production side though.

Great story shame about the narrator

Where does Busting Vegas rank among all the audiobooks you’ve listened to so far?

I would say this book is worth a listen for the story alone. It is a pity that the narrator's voice is extremely monotone and went through me a little by the end.

Who might you have cast as narrator instead of Ben Mezrich?

Don't let the narrator put you off you purchasing this book as the factually based story of this MIT group attempting to take the big casinos for all they're worth.

No one busted Vegas, vegas busted them

I was expecting some interesting explanation of a complex scam that netted millions of dollars. Instead I got something that sounded like something the author was making up as he went along. There is no excitement, no intrigue, no insight into the mechanical aspects of how these people were supposed to have "busted vegas"

What was most disappointing about Ben Mezrich’s story?

it was dull, it was boring, nothing happens except everywhere these people go they get kicked out within an hour or beaten up. No casino lost anything as far as i was able to tell.

Where does Busting Vegas rank among all the audiobooks you’ve listened to so far?

A study no one imagined with the lure of apple for Adam.

All the ingredients of your wildest dreams.

Which character – as performed by Ben Mezrich – was your favourite?

Ben relates all the characters so well you can step mentally into the plot.

This tale makes you wish you could shape shift and join the gang.