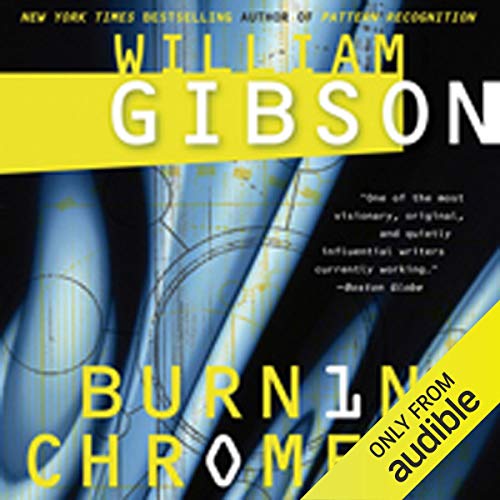 William Gibson's dark visions of computer cowboys, bio-enhanced soldiers of fortune, and hi-tech lowlifes have won unprecedented praise. Included here are some of the most famous short fiction and novellas by the author of Count Zero and Neuromancer.
©2003 William Gibson (P)2009 Audible, Inc.

"Ten brilliant, streetwise, high-resolution stories from the man who coined the word cyberspace. Gibson's vision has become a touchstone in the emerging order of the 21st Century, from the computer-enhanced hustlers of Johnny Mnemonic to the technofetishist blues of Burning Chrome. With their vividly human characters and their remorseless, hot-wired futures, these stories are simultaneously science fiction at its sharpest and instantly recognizable Polaroids of the postmodern condition." (Amazon.com review)

What listeners say about Burning Chrome

A set of 10 short stories: early Gibson cyberpunk and sic-fi that anticipate both his SPRAWL and BLUE ANT series. All the Gibson tropes are there just waiting to bud and bloom. Gibson's cyberpunk, dark and messy near-future; his obsession with technology, music, clothing; his uncanny ability to describe and name the bleeding edge where culture and technology blend; his noirish tribalism; his satire; his slick style; his curvy asians. The book is an uneven group of stories that approximate a pimply and adolescent Gibson sitting confidently on a couch ready to hack your future and steal your dated sci-fi pulp.

If science fiction is a reflection of the time in which it was written, William Gibson’s short fiction captures the zeitgeist of the late 70s and early 80s, when the likely future was looking less and less like the clean utopia of Star Trek, and more like something else entirely. In his classic “Johnny Mnemonic”, Gibson extrapolates energy crises, urban decay, corporate wars, radical body alteration, Asian economic domination, punk rock, and the dark, gleaming possibilities of worlds behind the glow of computer screens towards a half-sinister neon-lit horizon. Imagine (if you can, ha) a reality where one’s data trail leaves no safety from enemies whose presence pervades the air, and the only retreat may be into the darkest shadows.

While the specific ideas of the future represented in this collection aren’t quite as on-target as they were when I first read it in the 90s (when it was already getting dated), the combination of Gibson’s cool, lean, mildly sardonic style and the smoldering intensity of his imagination still feels visionary. He gives us a few tastes of possibilities, and lets those tastes linger on the palate, dark and beautiful. “New Rose Hotel”, which concerns agents in a future biotech trade war, has an almost wistful, poetic quality, aided by Brian Nishi’s Asian-accented audio narration. To me, the only recent writer who is somewhat in the same territory is Paolo Bacigalupi (I recommend his short fiction collection).

Not every piece is cyberpunk. “The Gernsback Continuum” imagines a photographer whose travels around Los Angeles give him hallucinations of a Raygun Gothic future that never was, and is a little frightening in its cleanness. The Bruce Sterling collaboration “Red Star, Winter Orbit” deals with an entirely different sidestepped future (in retrospect), in which an aging cosmonaut on a space station above an Earth dominated by the Soviet Union realizes that the dream of space has abandoned his country -- but not necessarily humanity. In “The Belonging Kind”, a loner in a bar notices a girl making the nightclub rounds who fits in just a little too easily, which leads to a Twilight-zoney pondering of what a life free of social awkwardness might cost. It’s interesting to see other ways Gibson might have gone, if Neuromancer hadn’t been a hit.

But the real gems here, worth the price of admission to me, are “Dogfight” and “Burning Chrome”, prototypes for Gibson’s Sprawl novels. The former turns as tightly as WWI flying aces in combat, sending three characters -- a ratty young drifter who sells boosted merchandise, a privileged college student whose parents have taken drastic measures to keep their daughter from losing her shot at staying in the economic elite, and a used-up combat veteran, whose permanently-rewired brain leaves him but a single talent -- into a tragic duel of skill. This, more than any other piece, feels uncomfortably close to our current world, and the personality in Oliver Wyman’s reading only enhances the prose. And “Burning”’s hallucinatory vision of a dangerous hacker incursion into a forbidden fortress in cyberspace, while bearing almost no connection to anything in cyber-reality, is still stunning in its vividness.

Bottom line: even if he got things wrong about the future (who got it *right*, though?), William Gibson remains one of the finer visionaries of its allure and angst, and crackled in short form.

YOUR THE REASON OUR KIDS ARE UGLY
Gibson starts out with an intro, in which he states that Asimov and Heinlein never did anything for him. He was influenced by Bester, Swanwick, and Sheckley. Another reviewer stated these stories were like abstract art. These statements should tell you how you will feel about these stories.

I am more of a Heinlein, Asimov person and prefer my art to be realistic, so I was not happy with these stories. If you are in the same camp as me, but want to try Gibson, I would suggest you start with Virtual Light. Virtual Light is my favorite Gibson book and I liked Al Tomorrow's Parties. I did not like this book, Spook Country, Count Zero or Neuromancer. You can not claim to be an expert in Sci-Fi fiction, if you have never read any William Gibson. In the middle 80's he was the hottest author in the field and was the leader in a new wave of Sci-Fi literature. Some of what you read today, you would not be reading if Gibson had never been published. So even though l did not like this, Kudo's to Gibson for having the vision to go a different direction then the norm.

The performance was excellent. I just don't feel comfortable grading it yet. Can you imagine a world where Chrome is an AI. Where Chrome is an AI that gradually moved up from drug dealer to madam. Where Chrome the AI is an ageless Fourteen Year-Old Girl AI that stops by the bar. Can you immerse not being able to tell if you are actually in a dive bar-or an internet cafe-or a chat room. Wilson gave the Post-Moderns, the Progressives, the New-Old Leftists, the avowed anarchists a world with every libertarian they desired - back when floppy disks were cutting edge. Be careful what you wish for.

this is a collection of short stories but ones that tie quite a few of his universe is together from the sprawl most notably Neuromancer. William Gibson rates right up there with the fathers of sci-fi Robert Heinlein and Isaac Asimov.

As good a Cyberpunk Anthology as you all are gonna get yo. Bro knows how to write.

A depth of authenticity to Gibson’s Sci-Fi

These short stories are great. Stubs of imagination and themes that fill out in his longer works. Even a surprise short johnny mnemonic is in here. Pleasant surprise to me I guess because I didn’t read the table of contents. Some of them are in the same vein of his Sprawl trilogy (count zero, Neuromancer, mona Lisa overdrive). Enjoyed the whole book. Thanks!

this is all the backstory behind Neuromancer. Johnny Mnemonic burning Chrome and the rest, they all add up to one world. one Visionary bringing the separate stories together. nice collection.

Gibson is a god

this collection I listened to well after multiple listening and reads of the sprawl trilogy. I love the nuggets that are from some of the short stories you get to pick up. I also enjoyed the non trilogy related stories as well but in my heart I love Gibson for the sprawl.

Would you try another book from William Gibson and/or the narrators?

The narrators are just trying to be cool and failing. Each one speaks in a hard voice, overemphasizing their words. The one good thing you can say for them is they enunciate clearly.

Lovely, but The Winter Market needs a re-record.

It's a real shame, because the narrator gives the story a very spirited reading, but the tone of The Winter Market is all wrong. The narrator seems to think he is reading a jazzy comic pop tale, rather than a hauntingly beautiful riff on post-humanism.

Other than that this is a terrific collection of SF classic shorts.

Found the Chrome a bit patchy

Heard a lot of great things about this collection of short stories, and even about film spin offs from some, so thought it must be good.

I think it is fair to say, William Gibson's writing has matured over the years, as some of the earlier works on here are really not that brilliant. That said, I can't deny that some of stories on here are great, and they show the genius that he is and the great worlds he can create. The mix of narrators is also a good move, but again, some are better than others.

Overall, good, but approach with care.

The variety of the stories.

If you liked William Gibson's Sprawl trilogy, then this is a must. Most of the stories share that universe, and Johnny Mnemonic, the Belonging Kind and Burning Chrome really stand out.

Great and brilliant book full of massive imaginative leaps and flurries of genius - I loved it.