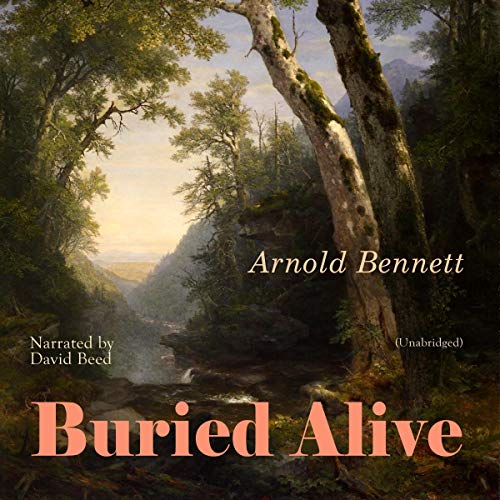 "Buried Alive" (1908) is a witty satire by Arnold Bennett about a shy painter. Excerpt from the book:

"The peculiar angle of the earth's axis to the plane of the ecliptic - that angle which is chiefly responsible for our geography and therefore for our history - had caused the phenomenon known in London as summer. The whizzing globe happened to have turned its most civilized face away from the sun, thus producing night in Selwood Terrace, South Kensington.

No. 91 was one of about ten thousand similar houses between South Kensington Station and North End Road. With its grimy stucco front, its cellar kitchen, its hundred stairs and steps, its perfect inconvenience, and its conscience heavy with the doing to death of sundry general servants, it uplifted tin chimney-cowls to heaven and gloomily awaited the day of judgment for London houses, sublimely ignoring the axial and orbital velocities of the earth. You felt that No. 91 was unhappy."

What listeners say about Buried Alive

The story is brilliant and the narration quite matches the story. The problem lies with the recording. It is just dismal. It sounds as if the protagonist is very far from the microphone. There is also plenty of audible and distracting background noise. In the end the extraordinary story won over the mediocre recording.