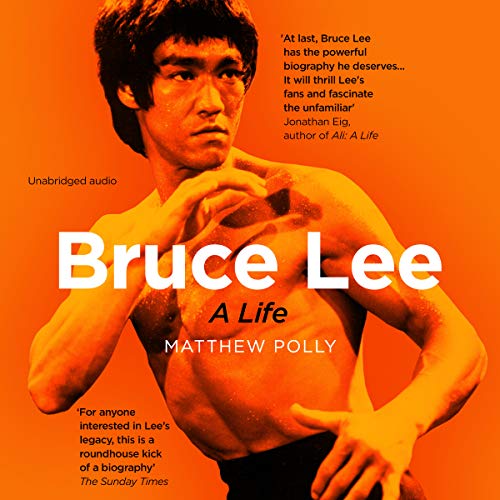 By: Matthew Polly
Narrated by: Jonathan Todd Ross
Try for $0.00

The most authoritative biography of film legend Bruce Lee, who made martial arts a global phenomenon, bridged the divide between Eastern and Western cultures and smashed long-held stereotypes of Asians and Asian Americans.

Forty-five years after Bruce Lee’s sudden death at 32, journalist and best-selling author Matthew Polly has written the definitive account of Lee’s life. It’s also one of the only accounts; incredibly, there has never been an authoritative biography of Lee. Following a decade of research that included conducting more than 100 interviews with Lee’s family, friends, business associates, and even the actress in whose bed Lee died, Polly has constructed a complex, humane portrait of the icon.

Polly explores Lee’s early years as a child star in Hong Kong cinema; his actor father’s struggles with opium addiction and how that turned Bruce into a troublemaking teenager who was kicked out of high school and eventually sent to America to shape up; his beginnings as a martial arts teacher, eventually becoming personal instructor to movie stars like James Coburn and Steve McQueen; his struggles as an Asian American actor in Hollywood and frustration seeing role after role he auditioned for go to a white actors in eye makeup; his eventual triumph as a leading man; his challenges juggling a skyrocketing career with his duties as a father and husband; and his shocking end that to this day is still shrouded in mystery.

Polly breaks down the myths surrounding Bruce Lee and argues that, contrary to popular belief, he was an ambitious actor who was obsessed with the martial arts - not a kung-fu guru who just so happened to make a couple of movies. This is an honest, revealing look at an impressive yet imperfect man whose personal story was even more entertaining and inspiring than any fictional role he played onscreen.

What listeners say about Bruce Lee

Its been a long time coming , but its finally here

I have been a follower of Bruce Lee now for over 45 years and i have read all , if not most of what has been written about his life (Some very good , some good and just a few - very bad). This book is like a breath of fresh air , true , honest with no grey areas just good old plain facts (Even i , a seasoned professional concerning Bruce's life , have learnt some new things - Thank you for that Matthew and great job). The narration was also excellent . nicely paced and the narrator sounded interested in the content and brought that to the reading (Well put together Audible). I finished this book with a little sadness though , knowing that after this can be no more books concerning Bruce's life - as this has done the complete job. Thanks again Matthew and to say that the 7 years it has taken you to put this together , was worth every single minute.

This is such a superb piece of storytelling. The depth and detail are wonderful. Polly has written a book that will appeal to fans of Bruce Lee, fans of martial arts and fans of 60's, 70's cultural history. Polly captures the hustle and bustle of Hong Kong, the counterculture of the 60s perfectly. There was so much more to Lee than a high kicking action star and this book does the subject justice.

What a fantastic read, must have for any Bruce Lee or martial arts fan.

I was disappointed to learn that the man that , like so many others had inspired me, had some naughty habits and bad behaviours.

His budgeting had me screaming internally, but who am I to complain. All these ingredients are what created the Legend.

Not enough when it matters!!

Like a lot of people who have read/listened to this book, we know who Bruce Lee is but we want to know more. I think there are very few fans who's first taste of Bruce wasn't 'Enter the dragon' and so although i had a great deal of interest in Bruces upbringing and early movies, it was all building up to 'Enter the Dragon'. The who's and the why's....how the movie was filmed, the interacting of the actors....how the actors came to be in the film etc etc. Unfortunately for me the crescendo was extremely timid. There seemed to be more emphasis on Bruces fathers career and Bruces childhood scrapes with the law than how Jim Kelly got his part as Williams, and what bruce thought and felt about Kelly and Saxon etc etc....that is all missing even though the story is full Bruces thoughts and feelings about pretty much everybody he ever came into contact with.
So all in all a very thorough, well written (and very well narrated) story but was lacking when it mattered.

Fascinating book engrossed throughout from start to finish.Well done to author and narrator.would recommend this book to any Bruce Lee fans.

I'm pretty sure no stone was left unturned in the writing of this book. The author doesn't sensationalise any aspect of Bruce Lee's life, but draws you in with a (I assume) truthful and engaging portrayal of a genius who was far from an angel but who tried to better himself and others.

I would absolutely recommend this not just to fans but to anyone even with a passing interest in Bruce Lee or the martial arts.

Obviously this all happened before internet when VHS was still fresh. And Bruce Lee seems to have had as much of a fight within America as he did with his arts and prowess.

As a fan of martial arts and autobiographies, I thoroughly enjoyed this. Took a while to finish but learnt a lot too.

The art of reading without reading

I have been a Bruce Lee fan ever since the days I could walk. Read up on him and his life, lots of autobiographies...this is hands down the most complete autobiography I have read. Lot of holes were filled in with this one. Amazing read!

An icon ...but flawed ....maybe....human ....most definately.....driven, ambitious, talented ....and an inspiration......totally. Till we meet at last ....Little Dragon...you were the best . One of my fondest memories.of my dad is going to an all night showing of a selection of your films....ending I think with Enter the Dragon....I don't think that old Cinema had ever done that before and to my knowledge it never did again till it was demolished. But it did for you .....what a night ...what a man ....gone but never forgotten....I smiled till the last chapter reading this book. My son won a Europen Karate Championship title when he was a 12 year old Black Belt. His Coach wrote me a note I recall not too long after he started the sport at 6..saying he was the best natural fighter he has ever seen....and I always say I got him into the sport because I wanted him to be able to look after himself ....a mixed race boy who I felt presented more of a target. Thats true. But I also wanted him to be a little version of you , a mini little dragon ....as I'd never had the motivation for myself or the drive....so I encouraged him instead. Thank you .......